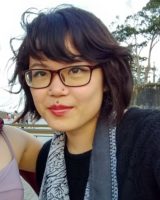 Ailsa Liu is an artist working across electronic music, performance, installation, fiction and poetry. Her work can be found in UNSWeetened and Westside Jr. She writes strangely humorous uncomfortable stories, on death and semi-autobiographical experiences, of liminal spaces and their feelings of loneliness and anticipation and anxiety as generative spaces. She is a member of Finishing School and All Girl Electronic. She is currently studying Fine Arts/ Arts at UNSW.

Rapid fire intonation, wishes build to an incessant knock.
Trace symbolic slashes with the knife over
offerings of gluten cake and roast pork.
Melted red wax drips down candles, hardens on white sheets.
She shapes words with her lips and tongue so that the incense might linger a while longer.
There’s always one in the family that keeps to the way.

They don’t accept my whys,
Sidestep with shrugs.
Too shameful to have forgot.
Chatter instead about miles run
and stock market falls.

She tells you,
speaks to you, your chronology so that you can trace yourself back.
Your aunt in eighties fashion denim vests, only remembers that you tried to bite her.
Second aunt, you’ve accidentally written out of history.
She’s here speaking to you, wearing a searching hurt.
You’re not sure how these pieces fit together

Sharp pops, choking smoke.
There lie the men, seven generations removed from you.
Only smirks at the silence for the absent women–at least there’s one or two.
They lie on rented land,
the greenery fence-posted by concrete,
two stairways from the traffic.
Baby roasted pork, skull split
bound with red string woven tightly,
cherries for eyes, crisp to the crackling.
We carry away the offerings in our bellies.

I, point my camera, videoing away from the horseshoe grave mounds
as I direct myself away from red papered explosions.
The corners of the screen warps as if I were walking drunk.
I won’t be able to find my way back.

For tepid colas fizzled flat
the children carried a tree-formed dragon to each entryway.
Hands sticky with fresh sap,
animate the leaping head.
Blessings punctuated with firecrackers,
money offerings held in a jaw of green grasses.

At rest, my cousin proclaimed languorously,
wiping sweat with slender fingers.
Ten dollars for a pleasant evening stroll.
What a steal.

We pitched that tree-formed dragon to a fiery death,
extinguished in the river.
Dad used to swim there, catch shellfish between his toes.
Now ringed by concreted, raindrops fall sideways
to disturb the surface of green scum.