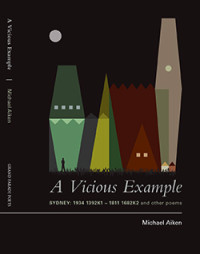 I’ve been visiting Sydney all my life. Doing city things; museums, art galleries, parks, department stores and shops that specialise in the necessary obscurities you can now order online. There are places in Sydney that have been transformed beyond recognition since my childhood, and others that have changed so little they can put me right back there, holding an adult’s hand and looking up at the little piece of blue sky between the tall buildings.

Many of the lyric poems in A Vicious Example take city scenes, often Sydney scenes, as their subject, and the most accomplished piece in the book is a long sequence on the city of Sydney. Michael Aiken, however, is as much interested in Sydney’s car parks and loading docks as he is in golden sandstone and glittering water. While Modernist literature of the twentieth century drew on city life experiences of speed, change, disruption, proximity and mobility, both thematically and aesthetically, Aiken’s approach is very much of his own time. There are glimpses of the more familiar fast and bustling city, but at other times the pace is slow, the spaces close to empty, his attention focused on the city as peridomestic habitat as much as a site of heightened human interaction. He writes not as flâneur, but as sentinel.

According to Aiken, the best view of Sydney can only be seen through

and an alcove behind the, “’premier address in Sydney’” is also a convenient place for urination. Aiken sees such places – the famous bridge, the smart cbd address — not from the perspective of commuter or office worker, but from that of the guard. He watches brief scenes and interactions, observes change over time, finds the poetry in repetition.

there’s an echo here of Frank O Hara’s poem ‘Lana Turner has collapsed’, perhaps even Duchamp’s painting Nude Descending a Staircase, but the key to the image is repetition, the fact that this is not a one-off experience inspiring affect, but a repeated observation that invites the reader to think further. Aiken sees the obvious but often overlooked cruelties and follies we all practice, and has a measure of vitriol to share, but can also be generous and appreciative, as in ‘Burwood Park’, where he celebrates the women who “perform their kata in the gazebo”, the operatist who “gives out an aria” and the fearless council worker in rubber gloves. This scene of community and civic life is brought into focus by the presence of a war memorial, “remembering the dead/ who were never there to realise/ we won.”

Another poem, ‘The canal’, has the canal as a kind of metronome, more accurately a water clock, filling and emptying regularly and repeatedly, the detritus of styrofoam cups and beer bottles described in the same breath as koels and cuckoos. The canal is observed overnight, and as daylight and the streetsweepers arrive, until at last the real experts on this locale, golfers “with secret knowledge of how every trap, ridge and fairway performs” arrive as the canal continues its business of filling and emptying and filling again.

Aiken does not always use the kind of care and restraint that makes this odd poem simultaneously appealing and unsettling. Included in the collection are the kinds of poems that might get an immediate reaction in a performance, for example, but don’t stand up to much re-reading or deeper consideration. There are enough poems in this book that making a few exclusions could well have resulted in a more focused collection of strong poetry. The temptation to simply let as much work as possible find an audience, or to demonstrate a variety of interests and styles might explain the inclusion of some of the pieces in this collection.

At the close of the book, Aiken includes an explanation ‘On the use of excerpts from Tim Low’s The new nature and John Birmingham’s Leviathan in Sydney: 1934 13922k1 – 1811 1682k2’. This explanation becomes a de facto statement of his poetic. Aiken discusses his use of excerpts from John Birmingham’s history of Sydney, Leviathan, and Tim Low’s The New Nature, a study that looks at the species of native birds and animals that have emerged as winners in the encounters and interactions between humans and other species, from the familiar birds we see in our backyards and parklands to bird species that have flourished as a result of the construction of sewage systems. On re-reading the poems after reading this explanation, Aiken’s selection of these two texts seems inevitable. It’s not just Birmingham’s lively, rock ‘n’ roll writing style that is likely to have appealed to Aiken, but also Birmingham’s interest in the continuities, as well as the disruptions, in Sydney’s history. The many hours this poet has logged in the security industry, working strange hours in odd places, seems to have provided an ideal opportunity for sustained observation of the less picturesque fauna of the city – there are recurring appearances by foxes, rodents, currawongs, ibis, and bats. It’s the kind of nature writing that Tim Low practices, the natural history of things as they are, rather than a reaching toward an imagined return to an idealised, pre-lapsarian wilderness.

These two texts might also be thought of as an echo of the Aiken’s use of time and space in his poetry. In this closing explanatory piece, Aiken makes it clear (though it is evident in the poems) that the pragmatic reality of his work as a security guard has revealed the life of the city at times and in places that most readers will not have experienced. It also implies the stationery gaze, the repetition of experience and observation that is so significant in this poetry, and leads to Aiken’s understanding of the city as interconnected systems, even ecosystems. It might not be everybody’s idea of ‘ecopoetry’, but Aiken’s interest in the life of the plants, animals, and birds of the city looks squarely at the way that birds and animals often framed as pests, and plants known as weeds thrive in both public and interstital spaces. It is an utterly contemporary, even urgently needed, way of looking at ideas of nature and culture. Perhaps Aiken identifies with the flying fox, hidden in plain sight in the foliage of trees in the parkland and gardens of the city.

ALI JANE SMITH is the author of Gala (Five Islands Press). Her poetry has appeared in journals such as Southerly, Cordite and Mascara Literary Review. Her reviews and essays have appeared in The Australian, Southerly and Australian Poetry Journal. She lives in Wollongong.