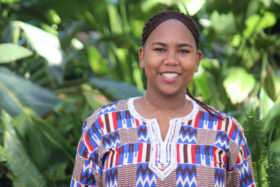 Rafeif Ismail’s current work aims to explore the themes of home, belonging and Australian identity in the 21st century. A third culture youth of the Sudanese diaspora, her goal is to create works that blend the traditional elements of the arts of her home country with elements of classic and contemporary western arts. She is committed to writing diverse characters and stories in all mediums, is currently working on her first novel and hopes to also one day write for screen. She can be found exploring twitter @rafeifismail

Houah Maktoub, your grandmother always used to say, it is written. She firmly believed that everything that will ever happen had already happened, that distance and time were no obstacle.  You used to sit by her side, in the shade of a veranda overlooking a courtyard, in that house surrounded by tall walls painted white, with its metal gate that was green with age, always open.  You listened, your fingers sliding across the imperceptible thorns of the okra you handed her which she expertly cut for that night’s dinner as she told stories she had grown up learning, in the village on the island between two Niles. Stories of family, friends and legends, she had weaved them together like a dark Sahrazad. It is where you first heard of Mohamad, the village boy who lived on the edge of the savanna, who cried, tiger! tiger! tiger in the grassland! Until no one believed him, and his whole village was massacred as a result. And of Fatima, who sang so sweetly that a ghoul stopped the Nile for her, so that she may retrieve her lost gold. Of the spirits in the rivers, those on land and ancestors who whisper in dreams, reaching out from some other world with warning and advice; years later, you will learn that quantum entanglement posits that two more objects may exist in reference to each other regardless of space time, and think on how much physics sounds like her folklore and faith. At your grandmother’s side you learned of a world three parts unseen and believed in it. Now those days seem hazy and distant, and there is a space in you, that twinges like phantom limb, as though you lost something you did not know you had, somewhere along the invisible borders between what you thought was home and here.

Your house is like every other, with three bedrooms, a kitchen and a living room and your house is full of ghosts. You see them pass across your father’s eyes as he stares at a wall, seeing a place that is not there anymore. They follow your mother into the sunlight as she gardens, they inform the heaviness of her step, the creaking of her bones – she is trying to grow chili, aloe vera, and a lemon tree, much smaller than the one that grew in your old home, that doesn’t seem to want to flower. You see the ghosts on your way to the bus stop, where every day without fail in the space of a single step, the street becomes dusty and you can smell sandalwood in the air, it is almost as though if you walk down that road, you would see your grandmother, sitting outside that large green gate with a big wooden bowl at her feet, cutting okra. The ghosts thankfully don’t follow close behind you at school, although they linger at the edges of the classroom, in the shadows of the trees dotting your school oval. You get used to them over time, those flashes of scent, of memory and you learn how not to react the same way you learn to not hide under your bed when you hear fireworks, or jump every time a car backfires. The dreams are more difficult to control but as the years pass you form an understanding between yourself and those haunting you.

It is 2016 and your newsfeed had been full of stories from the Orlando massacre, and suddenly the world is tilting much further along its axis, and gravity seemed much stronger, every breath feels like a battle. You do not attend the vigil to commemorate the victims and survivors. You cannot bring yourself to leave your house. Adrift from your body, you feel trapped, unable to look away as the news shows people becoming hashtags, becoming tombstones.  You finally understand why your mother cried that day two years ago, when you, eighteen and giddy to the point of intoxication tried to find the words to explain something you did not have the language for, when you tried to tell her about Dunya.

” Everyone feels like this way about their friends at some point!” She had screamed, when you’d both lost your tempers, yours in frustration, hers in something closer to desperation ” It does not mean you act on it”

In your stunned silence you had offered no response

“This will pass” she had said “and we’ll talk no more about it.” Ending the conversation.  The distance between you grew, until now, where it feels like you are standing on opposite shores of the same river.

Now you see her words for the plea and prayer they were. There is so much that is unspoken in that ghost house of yours, the silence is often straining to bursting as it rings on every wall but like bullets, words can ricochet and fragment, so you all keep your silences. You had called Dunya earlier that day, tired of navigating minefields in your living room. She had deactivated her social media accounts earlier that week, always much more practical when it came to dealing with grief, better at avoiding it, putting up walls and daring it to come closer, you on the other hand, soak it up like injera does mullah, your comfort food, until it becomes all you can taste. Travelling to meet her is the first time you are out in the sun in days and everything is just a bit too bright, the bus crowded enough that you have to sit next to someone.

It is sometimes easy to fall into the dream of this country, to walk towards that mirage of blind equality and for a moment forget that your life has always been shaped by the actions of others, from centuries and continents ago to just now, as you walk on to a bus and strangers with frightened eyes uncomfortably avert their gaze and shift as though shielding themselves, praying you don’t come near them. As always, your embarrassment comes unbidden, rushing through you, pricking your skin like tiny okra thorns and your every moment automatically becomes an apology. You remember that so much of you is not your own. Maktoub. But not the way your grandmother believed. No, in this nation people assume they can write your story from beginning to end, and wait for you to fall into place on the stage that has been set, it is why every conversation scans like a hostage negotiation, with your humanity being the item that’s up for deliberation.

Once, when you were fourteen and Dunya was still just one of the many girls you meet in passing twice a year during an Eid barbeque and your futures were not yet this possibility.  There was a boy who walked home with you every day after school. You talked in a way that you never did on campus, those conversations became the very best part of your day. He was different and made you laugh. He called you beautiful, for a black girl and you kissed him. It would not be the last time someone would pay you a provisional compliment, nor the last time you accept it. Back then, you had not yet realized, that those who view your beauty conditionally, undoubtedly felt the same towards your humanity.

With Dunya, you found a love without stipulations and it was at once both a revelation and revolution. She walks proudly in the streets with her dark hair beneath brightly colored hijabs so obviously herself and it terrifies you that she may not come back one day. As report after report makes its way onto your newsfeed of attacks on women who look like her, like you-  you pray more fervently than you have in years. Even if you’re not sure who you are praying to.

It’s one of those dime a dozen, cannon-fodder days that roll on lazily through the summer, with a too hot sun and clear skies when you meet her, under a jacaranda tree in some park you’d found when exploring the city, it’s biggest attraction is that its located several suburbs away from where you both live.  You have both learned to compromise.  You speak English with American accents and Arabic with Australian ones. You hold hands but only in places where you cannot be seen, because gossip spreads faster than bushfires and neither of you would survive the burn. Yet in those compromises of all that you are, you still carve out spaces for yourselves. You sit for hours under the shade of that tree, and remember stories from an ocean ago, and Dunya reads out loud from her favorite book, you listen to the cadence of her voice, as she recites poetry the way she was taught to recite prayer, it is almost indistinguishable from singing.

And there is a way to describe this moment, the shade, the tree, the breeze; this brief respite from the world –  in the language you were both taught as children – Al dul al wareef. There is no companionable phrase in English. That is fine, there are no words for who you both are either –  in the language of your grandmother and your parents –  the one you now speak with an accent now, love is described by forces of nature, monstrously destructive and divine, and in all of that, is possibly an explanation as to why in that language the words for breath and love are indistinguishable by sound. It is probably why songs only croon phrases like ‘You are the Nile’ ‘She is like the Moon’ and ‘you are the hawa coursing through my veins’.

“So speak to us of love, said Almitra” Dunya quotes in Arabic. Stories like yours don’t have happy endings, not any you have seen. But you are not only beautiful in your tragedy. One day you will write this story, and speak of love, it might be read under a different sky, it might have a happy ending. Just for now though you think, your eyes drifting shut I can keep living it.