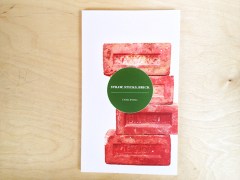 I first discovered Cyril Wong’s poetry at the same time I was introduced to his music, during the launch of his fifth collection of poems, Like A Seed With Its Singular Purpose, in 2006. Perched on a table in the middle of a crowded bar, Wong sang ‘Practical Aim’:

“Does solitude offer strength over time, or
is denial of it the only practical aim?

After deep loss, what does the heart

learn that it has not already understood
about regret? When all light finally

forsakes a room, do we take the time
to interrogate the dark, and to what end?”

Wong’s robust countertenor typically commands attention, capable of reducing the room to a stunned silence. This time, however, his voice conveyed the tentative, questioning wonder of a poet recently set free from conventional assumptions about solitude, loss and regret. Both in song and in writing, the questions of ‘Practical Aim’ are articulated with haunting irony, daring us – himself – to embark on a journey of unflinching self-discovery.

This coupling of music and poetry continues throughout his most recent work. Oneiros, for example, is a paean to the lush sounds of nature, providing solace from the alluring static of a city crammed with messages about how we should behave and who we should become. His latest collection, Straws, Sticks, Bricks, answers the lyrical call of ‘Practical Aim’ more abstractly, taking time to “interrogate the dark” when humanity is finally stripped of its pretenses. His findings are presented as a series of prose poems arranged like piano scales, words sliding up and down the slopes of memory, lust and desire.

The unbroken phrasing conveys the cramped space the apples inhabit, as well as the fog of discontentment that descends upon the “bowl’s bright rim”. If one replaced the sullen, silent masses that file into Raffles Place (the central business district of Singapore) every morning with Wong’s apples, it would be hard to tell the difference.

More direct references to life’s dissatisfactions also thrive on this tension between form and substance. In ‘Notes From A Religious Mind’, the one-sentence structure buckles under the strain of an internal battle to reconcile righteousness with self-righteousness, eventually giving way to unbridled arrogance:

“Holier; infinitely more blessed and moral; more beautiful, by default (notice my inner glow); enlightened; modest; assured … countless followers, so many more, and with even more to come; more influential and so powerful; and more right, unsurprisingly, than you.”

Such dissonance is again evident in Wong’s treatment of pop culture, which he views as just another religion of relentless self-justification. The feel-good truisms of pop’s biggest hits become portholes into an alternate universe where life’s tragedies and imperfections are laid bare for all to see. ‘Teenage Dream’, Katy Perry’s anodyne hit single about star-crossed lovers, provides Wong an opening to explore the cracks that begin to form after the infatuation fades. All seems fine at first, but “an arm … lifted too suddenly” or “a deliberately stern word at the wrong time” hints at a relationship that has begun “pouring sideways”.

Teenage lovers yield the stage to a pair of strangers uncoiling from their lust in ‘Born This Way’. While Lady Gaga’s anthem of self-affirmation papers over the complications of gay identity, Wong’s rendition brings them to the fore in vivid, almost grotesque detail. The aftermath of a one night stand takes a weirdly compelling turn after one stranger asks the other to “take a picture of him against the pale orange glow creeping in from the living room”. The impromptu photo shoot that follows captures the desolation of both the photographer and the photographed. The photographer does not want his subject to “look mad and ugly and alone”, but the latter still comes across as a “steroid-junkie corpse-bride” anyway. The garishness of it all “almost makes me want to hug him”, but the “stink of poppers mixed with a whiff of fresh blood dancing down his legs stops me from reaching forward and making no difference in the end.” Every frame of their loveless dalliance is vaguely comedic but also heart wrenching, balanced on the knife’s edge between farce and tragedy.

Wong’s poems are steeped in despair, but they also find redemption in the most unexpected places. The last poem of the collection, ‘Zero Hour’, revels in a universe of one, where the “tremendous weight” of loneliness and time is no longer a pressing reality but a fading memory. “You”, the reader, are dropped into an empty house deep in a rainforest, in the middle of nowhere and everywhere. At first, the solitude is “unbearable”, but you slowly learn to “sit for hours on the porch”, eventually “letting words go” as “what they fai[l] to capture beg[ins], at last, to take over”. Some would call this enlightenment, but Wong resists the glib certainties of language, implying what is achieved by examining the inability to describe it.

The uncertainty of our existence is the lifeblood of Straws, Sticks, Bricks; a void Wong discovers to be “an invitation to everything, the door to unending creation.” (‘Matins’) His poems are not an indictment of our deepest fears (be it death, loneliness or fear itself), but the lengths we would go to escape them. In trying to find The Way, we have lost our way. Why not take time instead to “interrogate the dark”, for no particular purpose and with no expectation of answers? As we rediscover our sense of wonder, fear might no longer become us. Perhaps that in itself is a ‘practical aim’.

AMOS TOH is a part time New Yorker and a full time Singaporean.