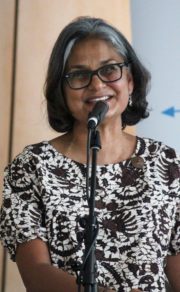 Anita Patel was born in Singapore and lives in Canberra, Australia. She has had work published in the Canberra Times, in Summer Conversations (Pandanus Books, ANU), in Block 9, Burley Journal, Cha: An Asian Literary Journal and Demos Journal and by Wombat Books. Her children’s poems have been published in the NSW School Magazine and in an anthology Pardon My Garden edited by Sally Farrell Odgers and published by Harper Collins. She won the ACT Writers Centre Poetry Prize in 2004 for her poem Women’s Talk. She has performed her poetry at many events, including the Canberra Multicultural Festival and the Poetry on the Move Festival (University of Canberra). She was the feature poet for the Mother Tongue Showcase at Belconnen Arts Centre, June 2016.

(for a Malaysian Grandmother in Australia)

You look so odd in this backyard
(for it is a backyard not a garden)
with its dusty lawn and barbeque,
long unused,  lurking in the corner.
Surrounded by the splintery teeth
of a paling fence,  you pause
under a tree purple heavy
with fruit.
Later in the kitchen your deft fingers
dance like butterflies –
wielding a pair of chopsticks in
a sizzling wok – conjuring the perfume
of a time long gone.
I show up at your door each afternoon
(sticky lipped, licking a banana paddle pop).
We step out among plums
split and syrupy, scattered on dry grass –
What to do with so much fruit?
This question never plagued you
when rambutans clustered,
crimson and fragrant,
in leafy branches on the tree
in your garden at  home.

Last night I heard a woman talk about apples.
Her words hung like fragrant orbs in the twilight,
the crunch and tang of apple stories
beguiled us for a while…
But I must admit I do not relish this cold climate fruit –
Fine for fairy tales and picnic baskets –
rosy sweet, neatly sliced, baked in a pie,
delicious, no doubt, but too cosy
for those of us who grew up with the
scarlet spite of chillies on our tongues –
those shiny, pointed (sharp as painted
fingernails)  berries  spiking our tastebuds
and staining our lips  blood bright…
There is no place for crisp and juicy
apple simple syllables in mouths that  know
the seductive malevolence of chillies…