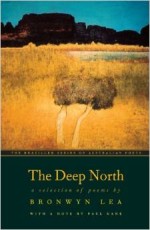 Think of the north, and in Australia we might think of Queensland, in particular the far north of that state. Or, we might think of the northern hemisphere – Europe, North America. Or Australia’s most immediate northern neighbour, Papua New Guinea. The north also suggests extremes of heat or cold. Having lived in Queensland, the United States and Papua, with time also spent in Europe, Bronwyn Lea has inhabited parts of all these geographic and cultural spaces. The Deep North comprises selected poems predominantly from Lea’s two major collections to date, Flight Animals (2001) and The Other Way Out (2008), but includes also a number of poems published subsequent to the latter collection. This ‘Selected’, the second volume of Braziller’s series of Australian poets (the first was Robert Gray’s Daylight Saving), draws heavily from Lea’s time in these various locations.

We need not of course read Lea’s title so literally. The title after all plays with an inversion, given we more popularly associate ‘deep’ with the south, particularly in a North American context. The north here represents a range of imagined ‘elsewheres’, physical and mental. But Lea’s poems do derive strongly from engagements with place and the people and relationships that have occupied her. Reading poems as ‘personal’ can be fraught (as well as nostalgically humanist), but certainly Lea offers in part a confessional mode while never lapsing into the maudlin rumination this might suggest.

Despite including poems written over a ten-year period, this selection pursues certain themes. The superb opening poem, ‘Born Again’, sees the narrator’s/poet’s ex-husband arrive out of the cold desert in North America – a visitor less welcome than the sparrow nearby scratching for seeds in snow. After a year’s absence he has returned, having found god who ‘forgave all of his trespasses’, though the narrator has not similarly forgiven: ‘My heart has a long ledger.’ The ex has come to collect the couple’s daughter. The narrator gathers a few belongings for the daughter, makes him wait outside. When she comes back out, her ex is kneeling in the snow, which has collected on his shoulders, the backs of his shoes, his upturned palms. The moment brings an unexpected ‘intimacy we never shared’. The poem closes: ‘Sometimes grace / comes like that, it falls like snow.’ (3).

This poem lays the groundwork for others that follow. The figure of the former lover in particular, recalled with tenderness and wit, recurs. ‘The Photograph’ retrieves the same setting (in an earlier period) as the opening poem, the narrator and man on the ‘dusty porch’, dog curled at the man’s feet, the couple’s fingers entwining as they reach for their beers. There’s a rare hint of nostalgia, and of rue: ‘In the photograph / we don’t ever let go.’ (32).

Such a subject can easily lead to a voice of bitter regret, vindictiveness, or maudlin self-pity. Lea resists all of these, and writes instead with mature reflection on the nature of intimacy and of memory itself. In this, she shares common ground with Tracy Ryan, whose Unearthed (2013) also measuredly, assuredly, addresses a former spouse. Lea shows how language is both helpmate and obstacle in conducting a relationship and in conveying its provenance. ‘Driving into Distance’ is a meditation on the tension of between ‘I’ and ‘thou’ and the strange beauty of ‘little losses’ (67).

Lea’s is very much a poetry of what’s observed and felt ‘in the moment’. There is no particular indication here that Lea is a self-declared Buddhist, but aspects of Buddhist philosophy – observance of the present moment and of the natural world, acceptance of change and adversity, the retrieval of grace in small acts – are often present. The selection in fact ends with ‘Hand of the Bodhisattva’, an observation of a first century AD Indian statue, and perhaps a gently ironic counterpoint to other poems dealing with feet – the most playful of which is ‘Standing in Bette Davis’s Shoes’, composed of lines delivered by Davis from her most famous (and famously feisty) roles.

Lea is also on the front foot in ‘Orthograde’ and the sequence ‘Seven Feet & Where They’re From’, the latter responding to John Forbes’ ‘Four Heads and How to Draw Them’. Reflecting on the position of feet in cultures including Greek, Chinese and Aboriginal Australian, this sequence is also an eloquent metapoetic play on the foot (we might of course think of metrical feet in verse), most strongly in evidence in the seventh poem, ‘The Etymological Foot’, in which the foot’s place in adage is gently subverted.

Most poems are told from an implicitly or explicitly female point of view, but ‘The Cairn’ and ‘One of the Horses at Marly’ are told from non-human perspectives. Both cairn and horse address humans who are moving from one place to another but barely able to locate their own selves let alone navigate their environment. As series editor Paul Kane observes in his introductory note to this ‘Selected’: ‘Travel, of course, is always displacement and it functions here as an image of inward dislocation’ (ix). Or, in the words of the horse from Marly: ‘O // human too dizzy to see, you shoot / an arrow & it stabs you in the back’ (56). By the end of ‘The Cairn’, we discover the one being addressed is ‘Bronwyn’, continuing the exploration of self that began earlier with the poem ‘Bronwyn Lea’, in which the arrow is as much emblem of injury as it is of Cupid’s love: ‘My name fits me perfectly as the arrow fits its wound’ (9).

The wound is a recurring though not overworked motif in this collection, most often manifesting as a sense of loss following the absence/departure of the lover. Longing, including sexual longing, is a hallmark of absence, but, as in ‘Found Wanting at Zen Mountain Monastery’, female longing is often experienced differently to its male counterpart:

Desire or craving, he says
(he means to say thirst),
is the cause of all suffering.
(He is the one who will not remember me more,
the one who lets my face fall
without shock like vapour
from his mind.) (72)

Not that, thankfully, the female is a victim without agency:

So the woman fired up her motorbike,
rode through the hills to the monastery,
left her credit card with the office monk
and walked into the zendo. (73)

Many of the poems, including those dealing with the past, are written in the present tense, giving personal history an immediacy. Lea also demonstrates her quiet attention to form, moving from free verse to unrhymed couplets, tercets and quatrains, with occasional forays into haikus, most notably in the excellent ‘A rush of butterflies’, which deftly builds on themes addressed earlier in the book:

Longing and loss never manifest as self-indulgence. As Kane notes: ‘Lea has that capacity to imagine and identify with the other, even (with “fierce tenderness”) those who have caused her pain’ (xi). And absence, as experienced by the narrator or others, can be sensual:

as the Japanese woman
turns her nightgown inside out

facing the world, the seeming seamless
elision of silks against her flesh

in daylight she watches her body age (‘The Nightgown’, 26)

‘The Poet’s Bed’ might remind us of Donne’s ‘The Sunne Rising’, sans lover:

The sheets have been changed
since she lay here, maybe even the mattress,
but the frame remains the same: (27)

And sometimes the abandoned marital bed is a liberation, as in ‘Women of a Certain Age’ who are:

waking to the sound
of their breathing …
… The dawn will be theirs to hold
a little while – its lightness – they will forget
some of what they have experienced
and remember what they were born with, (12)

In the deep north of memory, Lea nevertheless recalls, with eloquence and tenderness, some of the experience she has gained. And, without bitterness, some of what she has lost.

ANTHONY LYNCH is author of the short story collection Redfin and the poetry collection Night Train. His reviews have appeared in a various publications, but most often in The Australian and Australian Book Review. He is the publisher for Whitmore Press (http://whitmorepress.com), which specialises in poetry.