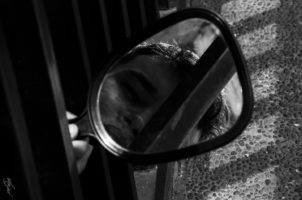 I am Mohammad Asif Rahimi, I am 28 years old from Afghanistan. I belong to the Hazara community, the third largest ethnicity and most oppressed ethnicity in the world. I graduated from High School and studied Political Science in Kabul city. I speak four languages. Due to security concerns and persecution I had to leave Afghanistan and seek asylum in Indonesia through UNHCR. I am currently living in Balikpapan Detention Centre. I have been in detention and deprived of all my basic rights since late 2014.

Rahimi’s work is published by Writing Through Fences and is to be published in the forthcoming Overland.

Life is full of adventures, either good and bad. People are inevitably faced with both. But what is important are the mechanisms of emotion felt during or after the incidents. Everyone individually chooses a route based on their assumptions and knowledge.

Typically when people are  about to be hurt, they seek coverture to unleash what is annoying. Every pain/harm needs its own mechanism. A variety of pains need a variety of mechanisms so to be unleashed. People choose different routes.

Let me dedicate this to the pains of affliction and fatigue. When a man is  hurt it can be too hard to unleash it at all. Arrogance stops him revealing what is inside him. But there are still ways to empty his mind. Someone may choose trusted friends and tell their feelings to them, someones else chooses their mother, some drink alcohol, smoke cigarettes, someone finds a place and shouts, and someone else  finds a place in which to be silent and so on… But there are some things that harm people and yet no mechanisms are available for release due to particular conditions in which they are placed.

When you can not find any of these mechanisms for release the pain turns to an immedicable pain. You find bodies around you not souls, you find walls surrounding you that get closer and closer, you find yourself amongst monsters that every moment bring more damage to you. In this circumstance you swallow all the pain to hide it lest the monsters find out and misuse it as a weakness. By doing this you just relocate the battlefield into the inside of you.

This battle is more devastating than what you were facing before. It eats you like leprosy and burns you like charcoal, your soul, conscience, goodness, good will are now all burning and you can not do anything to extinguish the fire. You are being gradually burnt.

Let me be a bit rude. Let me talk about something that many of you would consider nonsense and probably you would call the person with such feelings ‘lacking in ambitions’ or expendable. Have you ever thought about dreams, wishes and how much variance there could be.  Or thought that every human being has his/her/their exclusive wishes and dreams, though surroundings make them wish differently?

When I see people from different places I figure out that most of the people from conflict zones have no dreams. They think about their basic and undeniable right: ‘living’. Their basic right which no one has the right to take it, has turned to dream. They are in the same situation with those who want to solve the mysterious galaxies. Some can catch, some fail.

Let me bring some examples to you so you see the variety of dreams in different places;

When you ask most of the people from war torn countries what his/her/their wishes are, you’ll most likely hear one basic thing:  surviving his/her/their families lest they starve to death. If you ask from the children in these countries, your answer is already given if you listen.