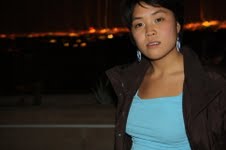 Bo Schwabacher is an adopted Korean American writer.  She explores the art of writing and teaching.  She holds a Master’s Degree in English (emphasis in creative writing) and a Teaching English as a Second Language Certificate.  Her poem “Korean American Tongue” has been published in Saltwater Quarterly.  She currently resides in Flagstaff, Arizona.

Confessions of an Adopted Asian American

I like eating shrimp dumplings at P.F. Changs.
My family—German & Russian = Schwabacher—ate Daeji Bulgogi and I sipped on sugar water

Sometimes I say 안녕하세요 (I looked this up on translate.google.com) to Korean women in nail salons and sushi bars.  I pretend I can understand the Korean exploding out of their mouths.

Sometimes the woman at the Takamatsu sushi bar in Tucson mocks me
“you only know three words and you keep repeating them”  Beautiful. Thank you.  Friend.

We all like to think of cheaters
as evil people, behavioral economist says.  I like
to think of your lungs
punctured and spilling
out Navajo flute keys like saliva
your mouth
upon the edge of her cranium
the lips of her pussy—the one you claimed
to have never kissed.  I think I smell her
woven into your neck, the sweat
of your back.  I smell her
in the way you say her name
“Suri”
sweet and forgetful.  The behavioral
economist says, Cheaters evade less
after having been punished.  A policy threatening
to denounce cheaters publicly
might contribute to reduce fiscal fraud.