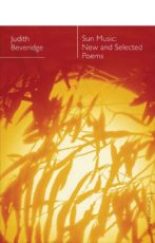 “I often think about
The long process that loves
The sound we make.
It swings us until
We’ve got it by heart:
The music we are”

Judith Beveridge tells us what she is. In the introduction to her collection Sun Music: New and Selected Poems, she describes herself as a lyrical poet, and discusses her belief that poetry must be a “showdown between the word and the poet” (xv).

She begins her introduction with her ‘why’. A shy child, she found comfort and company in books and her own imagination, something she credits with drawing her into poetry: “I could manipulate words to sound more confident” (xiii), she says, and that her use of “masks and voices” (xiii) allows her to open up. For someone who doesn’t “particularly like” talking about her own poetry, this introduction illustrates an ability to zoom out, adopting a self-aware bird’s eye view of her own poetic idiosyncrasies and inspirations.

Echoes of this interest in shaping and moulding abound within the collection: in “Invitation”, the speaker does this with food; “I try to steer the flavour, arrange the colours on a plate” (38).

However, her most striking confession is how her childhood shyness inspired her love of nature, a fascination which proliferates in her work and in this collection. She explains that “the natural world didn’t make demands of me to speak to it”, something which is clear in her poignant and meticulous observations of nature (xiii). Her poems are earthed and earthy, giving the impression of a poet bewitched by the simple wonder of the world. Nature as a lively yet undemanding presence operates in Beveridge’s work as both a jewel to behold and describe, valued in its own right, and as a gateway into an examination of humanity, womanhood, personhood. In kitchens and gardens, nature is sniffed and poked, something to be moved by and something which, of its own accord, moves. Beveridge paints us a nature that is elegant, blunt, and vibrant, but never uncommunicative.

The introduction prefigures a curation of some four decades of a much beloved and awarded work, as well as thirty-three new poems. Once delved into, this collection ebbs and flows, widens out and narrows in with pin-point focus on facets of a rich and richly observant creative life.

Her earlier work, sampled here from The Domesticity of Giraffes (originally published in 1987) and Accidental Grace (1996), wafts from the page in familiar spirals. These poems are soft-edged, recognisable. They could be written about moments from a hundred Australian childhoods, or the subject of a thousand lunchtime daydreams. It says something about what we ask of poetry that I need to clarify I mean this as a compliment. The poems aren’t out to skewer a broken world: they speak to it and about it with gentle care and curiosity. This work is invested in the flux between indoor and outdoor, the grey space between inertness and liveliness. Symbols weighty with meaning are juxtaposed against the everyday – in For Rilke, ‘our hearts – they’re like utensils’ (7) and in The Fall of Angels are ‘faces cracked like china plates’ (33). This early work is also ripe with soundscape, fitting for a collection collated around its namesake. Yachts (86-87) asks the reader to hear the small symphony of seaside sounds – “the call of an oriole”, “the sharp strike notes of bellringers”, “a child count the stars in the water off a rickety pier”. The way her speaker conducts the soundscape changes – “if you can hear” becomes “you’ll know”, becomes “maybe you only hear”, and “perhaps you hear”. This vacillation between certainty and uncertainty, concrete and imaginary, leave the reader suspended in a moment at once real and magical. Dichotomies abound in Beveridge’s work.

Through her title Sun Music, Beveridge rightly draws our attention to her preoccupation with poetry’s sonic and rhythmic potential, encouraging us to hear the poems she crafts. However, it is her use of another sense that charmed me most. Scents drift up from her poems – a “dark potato” and the leaves and lemon the speaker uses to try to cover its funk in “Flower of Flowers” (30) tickle something in the back of the reader’s mind, a curiously powerful invitation to enter a poem through the nose. Perfume plays a strong part through the decades, a seeming favourite motif of Beveridge’s. It makes sense: smell is hugely connected to memory, and perfume, in particular, is something man-made that gestures toward the natural. Hints of rose and sandalwood are concocted to remind us of the beauty of the earth, to allow us to wear it. Beveridge’s use of scent activates something almost primal in her reader, leaving them no choice but to live through the poem, to step into it like an herbaceous bubble.

The works taken from her 2003 collection Wolf Notes are populated with more spectres of the human than the earlier selections. These characters are at once strong and vague, often more archetypal than wholly ‘real’. The mysterious ‘she’s of “The Lake” (102) and “Woman and Child” (105), the titular Fisherman’s Son (109), “The Artist who Speaks To His Model” (116). The animals remain, in Wolf Notes (112), and the birdsongs of “Woman and Child and Whisky Grass” (107), though their existence is often filtered through a character’s sensory experience of them. Visuals, too, are sumptuously laid out. In “The Dice-Player”, dice are “an affliction of black spots” (99).

“Marco Polo’s Concubine Speaks Out” (61) and “The Courtesan” (119), written some seven years apart, illustrate Beveridge’s ability to return to characters and images and develop, deepen and darken them. The speaker of the first tells us the  “wind is blowing in the chrysanthemums”. In the second, the courtesan describes how “lightning flexed its muscled whip”. Whether this marks an overall turn to the darker, harder and more visceral in Beveridge’s oeuvre depends on how you receive the images she offers, part of the beauty of her work.

The Storm and Honey selections, from 2009, shift pre-occupations from the earth to the sea. Beveridge conjures fishing metaphors and watery imagery with (perhaps verging on tiring) frequency, though her gemlike capturing of moods and moments is omnipresent. There is a sense of looking out, looking beyond in these works that feels like an exhale.

The new poems, however, begin with a look back. “I rarely come here now, once or twice since you died” begins “Revisiting The Bay” (175), an achingly nostalgic memorial poem for Dorothy Porter. They are littered with memories, with preferences and perspectives earned by a life of creative observation. There is a sadness to these poems, though she warns us of this in her introduction: “I hope there’s enough overall sense of joy and wonder to override a creep into these darker tones” (xviii). These darker moments are, indeed, visited upon but never lingered in unduly, and she looks to the future here alongside remembrances. Her natural affinities remain but seem more charged with worry now. The poems show an enhanced sympathy and affinity with animals, beyond passive but loving description. They are impassioned, and loaded with a satisfying punch of righteousness. “To My Neighbour’s Hens” (178) is explicitly animal-rights (or at least chicken rights) oriented, with its plea that the sweet hens next door need never experience “slopped wire floors” and “battery cages”. “A Panegyric for Toads” (214) is a masterclass in balancing levity with the deep and dark.

Beveridge’s poems are all about balance – conversational and musical, weighty yet light as a perfumed breeze. They give the reader the space to live with them, comfortable and churning, until a line strikes you like a sparkling melody, lingering long after the music stops.

CAITLIN WILSON is a Melbourne-based student and writer of criticism and poetry. Her poem was recently short-listed for the University of Melbourne Creative Arts poetry prize, and her criticism can be read in Farrago and The Dialog, among others.