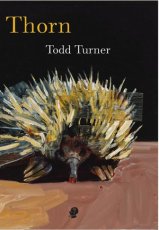 An Uneasy Symbiosis: A Review of Todd Turner’s Thorn

Todd Turner’s Thorn mines the relationship between the earth and the things which populate it, musing on their motives and daily moves. An uneasy symbiosis between animals and people, the natural and the built, is rendered in detail-oriented odes to memory, observation and wonder. In this, his second volume, Thorn re-treads some of the ground of Woodsmoke (2016), reflecting a similar drive to luxuriate in the minutiae of language. The specificity of Turner’s images allows the reader to see through the poetic eye, lending a haptic quality to his creations. There is a clarity and care to each poem, a tiny world where every word is in its right place, even if everything is not. As the collection’s blurb, written by Robert Gray, explains, Turner has much to draw upon in his rendering of a complex world; “a horseman and boxer on one side, a craftsman who creates artistic jewellery for a living on the other”. This eclectic collection of life experiences is reflected in the breadth of this collection, unconstrained by any one influence or vantage point from which to connect to the world around him.

The collection’s strongest moment comes early, with “My Middle Name”. The poem is memoiristic and confessional. The speaker explores the power of missing things – words, family, motives. Turner forms a loquacious ode to the power of silence. The festering presence of the unsaid is palpable; the speaker tells of “swallowed silence” (8) and describes his mother’s habit of “trying to air the echo of her father’s silence” (7). Turner gracefully conjures the feeling of holding in words, the ghostly figures of the past lingering on the tips of each character’s tongue.  This is not Turner’s only engagement with silence: Later, in “Switch”, the speaker relates that “a certain silence grew within me-/ an inwardness that only seemed to inflate” (32). Indeed, attention is paid throughout the collection to the power of invisible forces. The wind, silences, unspoken bonds and burdens weigh on the speakers in the early personal poems. In “Tiny Ruins”, the air itself chokes and confines; it “ropes” the speaker with “hefty knots” (22). In “The Raft” (24), nostalgia exercises its invisible power, a mix of crystal clarity and the hazy, rose-coloured mysticism of childhood memories.

A frequent allusion in section one is the image of the tree, connected strongly with family and heritage. Family history is “sprung in roots” in “Heirloom” (28). A stick, an instrument of corporeal punishment, is “an instrument of my mother’s affection”, “rooted in living memory” in “The Stick” (25). That the tree, particularly evoked in its roots and the knots, appears frequently in Thorn’s musings on family and the past gives an ominous undercurrent to the at times prosaic remembrances of his speaker. Such clean relation of memory is on display in “Dolls” (29), where the imminent death of a mother is presented with care but without overwrought description, its matter-of-factness walloping the reader with the reality of loss. It is a hard poem that demands to be read and remembered.

Section 2 brings with it observations of the animal kingdom with myriad seeming motives. In “Magpies” (35), “Guinea Fowl” (40), “The Echidna” (45) and “Horse” (51), animals are imbued with a quotidian majesty, watched and set down in detail for their own sake. These poems feel like a walk through the country and pausing to ponder the daily toils of its non-human dwellers. Turner burrows into the metaphoric potential of each creature, for its own sake and in the case of poems like “Villanelle for a Calf “(39) and “The Pigeons” (43), to illuminate something of the human condition. Through the premonition of “The Pigeons” closing stanza – “Poor pigeons, they were only looking for a place to lay their rotten eggs” (43) – Thorn conjures a self-fulfilling prophesy of doom, a pitying external voice which looks down upon the simple desires for home and safety. In “Snail” (44), Thorn takes on the invertebrate as character – lending it the humility of a blue-collar bloke. These poems are a refreshing reprieve from the chore of humanity – they do what good poetry should, taking us out of ourselves for a moment, and ensure we know more about ourselves and our world when we return. They contrast with the arguably more powerful personal poems, never letting the reader dwell on humanistic problems without consideration of our animal counterparts.

Section 3 deals in the macro and micro earth – spinning out to consider big questions among the celestial imagery of “Solar Lunar” (55). This penultimate section feels loftier, not just in its allusions to technology and the mechanical and its concern with height and a bird’s eye view, but also in its pondering of humanity from the top down. “Theorems of geometry” and “the horizontal lines of the stave” (55) conjure mathematical and musical precision, as opposed to the grubby chaos of creatures both human and not. The loquaciousness of the earlier poems returns in “The Sweet Science”, where a fighter is a “fox-trotting shaman” and a “poetic pugilist” (59). However, this section is primarily concerned with things. Thorn renders them weighty and lit from within by meaning, waiting for someone to puzzle out their importance. Poems like “Stilled” (61) render simple objects like crockery gilded with significance; containers, it says, “seem to reverberate in the mute dust-fall of light and shade” (61). Further dimensionality is added to this third section is Turner’s sources of inspiration for these poems. Turner is in conversation with an eclectic bunch of poets; poems are ‘after’ John Donne, Ted Hughes, Li Po and Jo Shapcott to name a few. This gives the sense of a poet speaking about the world to the world and gives the collection an intertextuality that turns reading into a treasure hunt, sending the reader scurrying to their bookshelf to find the inspiration points for the works.

Thorn reveals a poet in fine form, wielding language with an enviable control. The collection certainly stands as an excellent work outside of the context in which I read it, though I can’t help but ponder how my appreciation of this collection, so filled with images of the natural world existing without human interference, is enhanced by the state of the world at present. The constant pressing in of news about pandemics, climate change and natural disasters, hammers home the powerless of the individual being. Thorn is a welcome reminder that despite chaos some things go on, perhaps without fanfare or seeming purpose, but steadily and beautifully.

CAITLIN WILSON is a Melbourne-based student and writer of criticism and poetry. Her poetry can be found in Voiceworks, Farrago and Above Water, and her criticism can be read in Farrago and The Dialog, among others. She was recently accepted into the University of Oxford Mst Film Aesthetics.