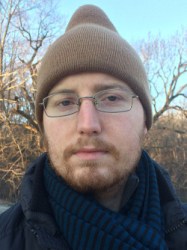 Cameron Morse taught and studied in China. Diagnosed with Glioblastoma in 2014, he is currently a third-year MFA candidate at the University of Missouri—Kansas City and lives with his wife Lili and newborn son Theodore in Blue Springs, Missouri. His poems have been or will be published in New Letters, Bridge Eight, South Dakota Review, I-70 Review and TYPO. His first collection, Fall Risk, is forthcoming in 2018 from Glass Lyre Press.

Crossing into the main hospital, I remember
the bruise of my past life, thunderheads
of scar tissue in the crook of my arm, vials
of blood drawn weekly while I ate Temodar.
I remember the red river of platelets, lymphocytes,
and white blood cells that sprang
from my weariest vein. After two years,

I’m returning to Centerpoint Medical Center
as another man, a man accompanying his wife
on the hospital tour that will give them triage,
labor rooms, and the mother-baby unit
where she will rest after giving birth to their firstborn
in October—a man with no bracelet around his wrist,
no name, no date of birth, no questions asked.

a temporary suspension
of breathing, occurring in some newborns
in the early morning
dark where I walk. When it sounds
as if the whole world is holding its breath, waiting
for a squirrel to pick itself up
and walk away from its body and brains
dashed along the curb, prostrate,
I-70 murmuring like a lamasery
beyond the rooftops, a road tossing
in its rocky bed, all the contrivances of man.
Beside the squirrel, oak leaves choke
the storm drain. No one is coming
to clean up the mess.