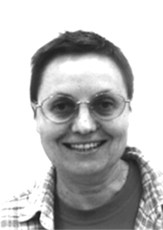 Carolyn Gerrish is a Sydney poet. She has published five collections of poetry. The most recent The View from the Moon (Island Press, 2011). She enjoys performing her work and is currently working on her sixth collection.

at my new apartment block   (circa 1935)
in the suburb where everything has
happened   & is set to begin again   there’s
only three flats (plus mine) & no one watches
T.V.   (reception unavailable in the building)
Bin Night   is an urban mystery    Sorry
she says from behind her chained door
I think it’s Tuesday   then again   it could
be Wednesday   & how effective are your
phone and internet connections?   a nest
of fraying wires   above the unlockable
letterboxes  in the lobby
where a scissored gesture   from a jaded
prankster   could render you perennially
incomunicado