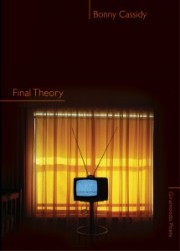 Bonny Cassidy’s Final Theory takes as its title an alternate name for the ‘theory of everything’, the elusive, hypothetical theory that would explain and connect everything in the universe. That such a theory remains hypothetical seems key to understanding why Cassidy has named this collection after it; the book, presented as a single, long poem, is also elusive, gesturing towards connections and correspondences without seeking to explain or articulate them.

Final Theory is structured in four parts – there are sections, marked throughout with asterisks, but no titles – containing two interwoven narratives. The first of these follows the travels of a couple who move through a series of landscapes, by turns awesome and terrible, ruined and magical. The images in these sections are often striking; for example, a reader is presented with the ‘loose gauze of frozen sun’, ‘night, with its sliding walls’, ‘boulders / the colour of old fires’, and ‘a plain of sand        where a swamp / gave itself up to sun’.

This rich yet desolate imagery seems deliberately cinematic, suggesting not only the real threat of catastrophe the earth now faces but the visual rhetoric of disaster narratives. The conjunction of the two is captured in the following standout passage from the first part of section I:

Once, during a Roy Andersson film I saw celluloid burn that way.
First, the sound departed and the room went still; then
shimmering rocked the screen like heated oil; before a dark pupil
burst the scene and grew.

Here, the cinema audience switches from watching fictional events to witnessing actual ruin; the self-destruction of the modern, industrialised world, and the representation of this destruction, coalesce in a single moment. Given its placement at the beginning of the sequence, this seems an indication of how to encounter the poems that follow; they too ‘shimmer’, as representations which seem both real and un-real, an effect amplified by the references to dreams that occur throughout. The poem seems to warn that its impressions should not be dismissed as mere verbal artefacts, as they also point to genuine, urgent threat.

Final Theory was researched and written in places which were once part of Gondwana: Australia, New Zealand and Antarctica. The narrative that runs through it, however, is only part-travelogue. It is also (for want of a better description) a love story; there are moments of tenderness for this couple as they move through vast, ancient landscapes, aware of their own smallness, their own mortality, the brevity of their existence when compared with the places they visit, which have amassed ‘layers staked on time’s dart like a Valentine’. Faced with such desolation and grandeur, they seek solace in one another. The speaker’s partner, a photographer, remarks ‘My camera might sink / but we’ll be safe inside it: / fat and rich and pink’, while the speaker too seems hopeful despite the uncertainty they face:

And in some future ocean our beloved proteins will
roll, perhaps finding one another, linked
by a theoretical wave
like voices sent through cans and string

This sentiment at first seems cool, almost detached – in death, a person is reduced to ‘proteins’, human connection to a ‘theoretical wave’  – alongside this, though, there seems to be a genuine hopefulness; a sense, perhaps, that when considering the enormity of death, there is a very human urge to find reassurance in the few certainties we believe we possess, even while recognising that those certainties are in themselves crude and unstable, ‘voices sent through cans and string’. It seems no coincidence that their narrative concludes with a deliberate dive into the unknown: ‘hold my hand // we rush in’.

These sections also contain frequent references to the creative work the couple undertakes – there is a poet as well as a photographer – as they document their travels, and the poet, while working, more than once encounters her double/reflection, whom she calls her ‘heartless twin’. Several other instances of this ‘twinning’ occur throughout; of the lived experience and the representation of it, of the photographer’s captured images which are re-captured, in a different form, in the poems, of the couple’s present and former selves (‘our twins and twins of twins’), and, of course, of the two interwoven narratives. The importance of this theme of twinning is suggested when the photographer creates a darkroom, and an unexpected double exposure emerges:

have imposed a double: lichen and hub cap
printed across one another.

like two hands braced against the light, a herald for the
Anthropocene.

Two unrelated things, layered on top of one another, create a new whole, and the instinct to seek out pattern and connection brings meaning to the accident  – the double-exposure becomes an image symbolising the period that began when human activity started to influence the earth’s ecosystems.

Twinning is also connected to Final Theory’s other storyline, which follows a young girl, plunged into the ocean, who makes her way through a series of remote, unpeopled, watery locales, witnessing the alteration and sometimes devastation humans have wrought on the earth, even – perhaps especially – in its wildest places. The sequence opens with the girl finding herself on a raft of ‘plastic gametes’, an image which suggests the plastic detritus floating in the ocean, which groups together and grows, like reproducing cells. Such an image also recalls the lichen and the hub cap, as it is another instance of the natural world and evidence of human intervention layered together, now inextricable. The link between the girl’s world and the world of the couple, which seems nearer our own time, is further suggested when the girl finds some of the couple’s possessions – a Toyota, for example, and the photographer’s ‘canisters’ – among the debris she explores.

That the poet working in sections I and III seems to re-emerge in sections II and IV, as an authorial voice describing the girl and the process of her creation, also ties these two narratives together:

I’m switching the poem off and on;
it’s not a pet, after all, but a function.
Scapekid. Widget. And she knows how
to thicken like a pause, glaze over.

This process of creation, then, is not without its difficulties. That the girl can ‘thicken like a pause, glaze over’ suggests her unwillingness to appear in the manner the poet has envisaged, and later, the poet seems even less convinced of her control over the girl, and the narrative:

Here, I thought, she
might speak – a language
of one – and so disappear
into meaning. No.
I wasn’t here.

Even the poet’s creation becomes a source of uncertainty; in this poem, any expectations about the future are revealed to be nothing more than speculation, unreliable and subject to change.

Final Theory is a dense work. It is a poem which requires a reader’s focus and concentration, and which rewards a second and third reading. The phrasing is often complex, the narratives fragmented, scenes impressionistic. When taken as a whole, it is enigmatic, visually striking, and unsettling, and I imagine it will appeal strongly to some readers while baffling others. Yet I would suggest that it is worthwhile working through any initial bafflement. The conflict which seems to lie at the heart of this poem – the idea that everything is connected, and how the acceptance of this idea must sit alongside an acknowledgement that the nature of these connections lies beyond our comprehension – is an urgent one given the state of crisis the world is in. Final Theory suggests that while a ‘theory of everything’ may be beyond our understanding, it is not beyond our capacity for wonder.