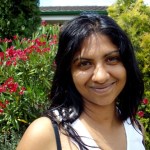 Christine Ratnasingham is a Sydney based writer and poet, who was born in Sri Lanka and grew up in England and Australia. She has had her poetry published in conversations, Extempore and Hypallage, and was awarded the HB Higgins Scholarship for Poetry from the University of Melbourne.

Like a little bird, one you’ve never
seen before, who appears to have accidentally
flown in
through a slightly open window
and into an enclosed installation, enlarged
with people busily pecking at their own
and other people’s lives – flocking, talking, necking
laughing
oblivious to what has just
happened. You’ve seen it, but you’re
paralysed with hopelessness. What can you
do? She’s too fast to catch, filled with
moments
of panic, then stillness. And you watch
her, realising that now, only seconds later
this furiously flapping bird
once frightened, now seems … okay, quite happy
in fact
exploring her surrounds, making the most
of the situation – nibbling at crumbs
jumping around feet, moving along with the crowd
blending in, and it seems that even if you
wanted
to help her back outside, you may
frighten her more, and perhaps
even be going against her will, and so
all you can now do is simply watch, slightly
amused
who’s to say she doesn’t belong
We all do
don’t we?

I forget I have it, until I remember my childhood
when nearly every student felt they needed
to remind me that I was not of their whiteness

I forget it clothes me, until I leave home
and catch photographic glimpses in bus windows
and ad hoc reflections, reminding me

I forget it owns me, until I’m asked where
I’m from, for I can’t be from here?
But from somewhere else, a place I don’t really
know and that has forever branded me

I forget its beauty, until I see it on other
bodies that carry it with dignity
or when they are clothed to celebrate
their difference

Only one of my many parts, yet mostly, the first
one you’ll see when you look at me

I forget, then remember
I own my