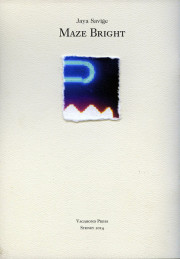 The title of Jaya Savige’s chapbook, Maze Bright, previews several of the book’s concerns regarding writing and writing as process. While the title suggests itself as a single adjective (hyphen omitted), it equally proposes itself as an anastrophic syntax, one signalling perhaps the glaring complexities of the linguistic terrain as well as the varied directions and likely wrong turns in language that lead, potentially, to illumination.

Questions of direction and orientation infuse the opening poem, “Etude”, which looks to the games arcade and Pac Man, and the maze-like layout of each, as sites analogous to writing. The opening lines of the book read:  “I’ve lost the blueprint but from memory/the maze idea emerged first as a way/of mastering the art of being lost /by simulating it under controlled circumstances”. This seems clear enough but for, “the art of being lost”, which teasingly problematizes the question of direction for how does one “master” the purely negative condition of “being lost”? Read “being lost” as an ironic substitute for “finding one’s way”, that is, read it as a disruption of logic, are we’re invited into the  spark and intelligence of the collection.

If the early stanzas preface a poetry of indirection, “Etude” soon shifts the focus, questioning the ephemerality of the artwork via the transience of its eighties context, and concluding with the lines: “Quick, before the window shuts/ and my blinking initials vanish forever from the end screen of the custom/French walnut tabletop video arcade/circa nineteen eighty-eight.” The unpunctuated line, “French walnut tabletop video arcade”, which in its temporal span echoes the first line of the poem, “Pac-Man is my minotaur”, merges classical and contemporary allusion exemplifying the proximity of antiquity and, thus, the agency with which new may be made old. Additionally, there’s the sense in this kind of appropriation that the mythologies themselves are re-contextualised and vitalized within their new poetic domicile.

The question of myth and the means of its integration becomes an engaging element of the work. When in the poem, “Wingsuit Journal” Savige refers to his persona as “some pissed off Apollo”, the question of allusion as a certain default position for analogy suggests itself, but then, in this poem, we are talking about human flight and so a godly comparison can only seem apt. “Magic Hour, LA”, invites similar consideration. Savige compares a “folding screen depicting notable scenes in feudal Kyoto,” with, “a buff pimp in denim cut-offs…outside a 1 hour photo”, it being more than the rhyme that fuses ancient and contemporary worlds, and very much the “folding screen” and instant photograph that together suggest some continuing human propensity towards mediated reality. Myth is part of continuum and LA merely a latter-day phenomenon of an enduring human fascination.

The epistrophe of the closing stanza of the same poem asks further into LA as an icon:

…when the locust sun descending on
a field of bending wheat is prologue
to a tale stripped of all denouement,
and silhouettes are all our dialogue

In this instance, the emphasis on a stage or cinematic terminology speaks to various aspects of the Californian character: LA as “Tinsel Town” of glam, and generator of myth par excellence, but as Hollywood, historical home of American film-making, whatever myth the latter and its product imply.

“On Not Getting My Spray Can Signed by Mr Brainwash” seems a distillation of concerns around the value of art and object in a consumer age. It’s a poem that concedes the appeal of a modern material world while dissolving boundaries between traditionally revered antiquity, emblem here for “culture”, and modern, disposable commodity. It’s rhyming stanzas again smooth the edges between a modern consumer world and world of art and culture: “I appreciate/a top shelf invader piece/ as much as any Eurydice.” The poem isn’t, however, without its misgivings in regard to consumerism and can be “pretty sure” of “the way our fetishisation of the toy assault rifle inflects his [a toy Elvis wielding an M16’s] canonization as The King”. Stanzas five and six exemplify the poem’s expository style:

The poem ends memorably with an appeal to Duchamp, appropriate figure here for the way we value art and object. Savige “prays” to Duchamp that he not be affrighted by contradiction, but rather accept the potential for complex, contradictory relations with the world. The final lines, “…unfazed that he’s conscripted/by the thing he criticizes,” suggest perhaps a conflict with the poetic object as much as a conflict with consumer fetish.

Probably more than any other poem featured here, “Act of God”, resonates with certain of those from Latecomers, and the way that collection describes a human presence in nature. It’s a short but strikingly sinuous and gritty poem describing a moment in nature, a meeting between birds, in the context of an indoor garden in a corporate building. I was intrigued as to what its act of god might refer? Is its reclamation miraculous? Does it refer to the corporate gods? Are we lured into some anthropocentric position in which we read humanity as god, but perhaps forget nature itself? The corporate building in question is the Suncorp building, somewhat divested of signification if read it as just another bank in Queeensland. And this is part of the appeal of the work; we have the reified Suncorp building and attendant myth on one hand, and a plausibly concrete locality on the other, and so an interesting tension. There’s lots to consider in this poem but what really struck me is the strength of every line, right up to the superb ending (not quoted here.) A sample reads: “Among the starlike flowers…she met a blue-faced honeyeater…To gain its trust she noshed on freshest sushi of the soil…an Hibiscus Harlequin beetle…whose bright shield shone…as she crunched it for protein.”

What surprise, what incongruity do we find in nature taking up home in the corporate void, of investing it with life (there’s the act of god). And what incongruity do we see in a rock icon lunching with an ageing monarch? I am not proposing any particular thrill of ironic delight at this, only that in the poem “Nick Cave at Buckingham Palace”, we again encounter a mythological mergence, one more about culture here than time or place. But here’s a delicious offering, a trenchant and energized parody of Australian celebrity culture, totally at home with the subtleties of Australian life and language – as the following passage indicates:

The rest of the poem reads with matching acuity. Describing a cast of Aussie guests to the palace, and Cave as, “high priest of duende…currawong among a froth of swans”, the poem does much more than create a giggle out of its apparent contextual incongruities. It deftly engages an Australian idiom, “…poor Clive is properly crook”, which addresses an older Anglo-centric Australia, parodying Rolf and Clive and the monarchy, perhaps, as archaisms; it presents a lively discourse on language as relative to context: “My patois is a heady mix of amnesia, empire and capital”, as if the palace were the perfect location in which to conveniently forget one’s language and one’s origins.

Of the ten poems that make up Maze Bright, each indicates a depth of resource and intelligence. Some were written in Paris, others first published in the UK, and while each poem embodies a wealth of cultural reference, and interplay of myth and allusion, they are also, in a lively and demotic way, Australian. I’m guessing this book comes as one of the last in the vagabond Rare Object series (which has given way to the more recent deciBels undertaking). It’s best not to look at books such as these as “necessary fore-runner to the subsequent full-length collection” but to view them for what they are, in this case, a joyous offering in Australian writing and publishing.

CHRIS BROWN lives in Newcastle. His poems have appeared in Southerly, The Age, Overland and Cordite and were recently anthologized in Kit Kelen and Jean Kent’s anthology of Hunter writing, A Slow Combusting Hymn. He is writing a book of poems:  “hotel universo”.