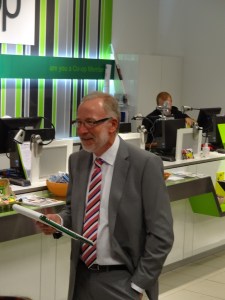 Christopher Pollnitz’s Little Eagle and Other Poems was a Wagtail publication in 2010, and his six “American Idylls” were in Mascara 11.  He has written criticism of Judith Wright, Les Murray, Alan Wearne and John Scott, as well as D. H. Lawrence, and been a reviewer for Notes and Queries and Scripsi, as well as The Australian and Sydney Morning Herald.  His edition of The Poems for the Cambridge University Press series of Lawrence’s Works appeared in 2013.

He is playing, he is amusing himself.  But what is he playing?  We need not
watch long before we can explain it: he is playing at being a waiter . . .
Sartre

Black Prince of the undergrowth, to me his crackle
and hiss seem off-station, but you and he have a
thing together.  As I finish each two litres
of juice, you put the lids out in the garden
and your pretty boy comes again and again carrying
awkwardly off in his beak the royal blue baubles.

So intense, so intellectual.  I see him sitting
at a sidewalk café, trading Gitanes and banter
with Jean-Paul and Albert, him in lustrous leather
while Simone looks on askance from another table
or eavesdrops for news of post-existentialism
and clues on how to pick up.  Smoke and mirrors . . .

It doesn’t do it for him, the bum-fuss and fluster
of hens flouncing in their pastels.  Deep in his bower
blue-lit from below, magnified by his comb, I imagine
him preening, and know who it is he preens for
—him with his satin cloak and his rod of amber
his necromancy and his dark effulgence.

Subterranean cool that burns out—is this what maleness
amounts to?  Brilliant fencer, prince, philosopher
or Freddie Mercury?  Noting the uncollected
lids, you say He’s moved on, disappointed
but not surprised.  You’ve other things to get on with
while I rack my brains conjuring up some witticism.

Whom the gods would destroy, they say, but isn’t it rather
since the gods are mad, their devotees drive them crazy?
That one at the barbecue, proper clever feller
left the bread roll in your hand, still with the sauce on
and stole the fire for his people, as well as the sausage.

And now this one, time and again dive-bombing
in the kitchen window his own adolescent image
—demented.  We worry about him and the damage.
We tape up tabloids over the glass to distract him
but still he comes, kamikaze seeking his crystal.

One day it’s different, he approaches his rival close-up,
childish anger morphing to inquisitiveness.
You tell me I should speak to him more nicely
but my every word is laced with the mordant satire
reserved for watchers of reality television

or addicts of cooking shows who are just as stupid.
“Look here,” I say, making a chicken sandwich.
“This bird came in yesterday.  His name was Hansel.”
Unperturbed he inspects the preparation bench and oven
—he doesn’t tweet but his eyes are bright with banter.

He peers in like Satan at this weird domestic Eden
little realising in his innocence what he’s seeing.
But hang on, if he’s innocent I’m the serpent
long, lithe and upright to his stocky Adam
and remembering how a kookaburra tackles

a six-foot common brown (a good yard dangling
each side of the beak, snake head a bloody tulip)
that gaze could terrify.  No, no, forget it
—he’s a creepy bird, but he’s a bird for all that.
Comes another day, another stage of intimacy

—beak to the pane, and perched on the ledge of the window.
When I move towards him, he cranes even closer
when I step away, he edges back.  Is he seeing
me in himself, outlined in his own reflection
Or is he seeing the greater Self ascending

On the third day, you blow him a kiss through the window.
He pecks the pane and is off,  to join the bush chorus.
He’s growing up perhaps, losing his religion.

of ryal egle myghte I telle the tale,
That with his sharpe lok perseth the sunne,
And ys the tiraunt of the foules smale.

The Little Wobby eagle in my father’s death year
I remember like an incandescence burning
to burst from casuarina darkness, trawl the river
then flip back, and up again, with a wasp-like talon.

Had I been another Christopher I might have adopted
that estuarial Hawkesbury bird for symbol,
although, in hindsight, I’d rather take the little
smouldering wicks of the she-oak for my image

for there’s another candle that can light me:
us in the car park, the great swoop of coastline southwards;
their beaks like butcher’s hooks, gannet after gannet
mindlessly crashing into the cup of sorrows

that suddenly empties, as the eagle pulse-glide-pulses
overhead of all; and you in the car repeating
details of your friend’s cancer prognosis.  All I could think of
was getting away overseas on leave and a conference;

and you—would she still be here on our homecoming?
Reviewing, Promethean eagle, your outstretched scalpel
drawn over the grey breasts and belly of the waters
I don’t yield much to my fear of you, nor do I take much

heart from your liverish victim.  Given pharmacological
aid I can dispense with a demigod’s foreknowledge
(or doctor’s) of what I can endure for what duration.
Now it’s dementia I fear, particular losses

of others, and having no busy mind to distract me.