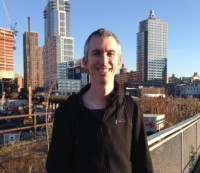 Damen is a Queensland poet, and has been writing for the last 20 years. He is currently working as a Contracts Manager for an Unmanned Aerial Vehicle company. Damen has been published in Cordite and The Courier Mail, and has won or been highly commended in the Yeats Poetry Prize, the Nillumbik Ekphrasis Poetry Award, Ipswich Poetry Festival, the Philip Bacon Ekphrasis Prize, and the FAW Tasmania Poetry Prize.

What Poem Would The Mining Companies Tell Lionel Fogarty?