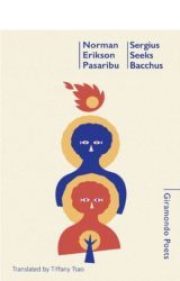 Born to a Muslim father and a Protestant mother, Norman Erikson Pasaribu was raised in Jakarta, Indonesia, but his roots lie in the ethnic Christian Batak community of Sumatra. Though he writes in Indonesian, Pasaribu’s poetry collection Sergius Seeks Bacchus (translated by Tiffany Tsao) is a vehicle for queer voices outside western Anglophone experience, offering a glimpse into a world that is all too real for non-conforming individuals in much of the contemporary world.

As of this writing, in more than seventy countries it is a crime to be gay. In ten it incurs the death penalty, and in no country in the world are LGBTQI people treated equally under the law. Exposure, humiliation, forced medical intervention to affect a ‘cure’, and curtailment of basic freedoms are everyday realities. ISIS tossed gays from minarets, and in Chechnya men and women suspected of homosexual practices are incarcerated in concentration camps. In parts of Indonesia, homosexuality is illegal under Sharia Law and punishable by flogging.

This in effect is the shadow under which Pasaribu writes—the kind of world western urban gays might believe was left behind in the 1970s, with the rise of gay liberation. And although the poet writes about Indonesia, his references are recognisable and relatable because they are drawn largely from a western pop culture ethos that pulls in television, magazines, social media, as well as the Judea-Christian tradition. Even Dante Alighieri gets a look-in with poems such as “Inferno”. “Purgatorio”, “Paradiso”, and “La Vita Nuova”, representing the symbolic journey of ascent and renewal that is at the heart of the book.

From the outset, however, Pasaribu evokes the spirits of Sergius and Bacchus, two early Christian martyrs who, like Saint Sebastian, have been absorbed into the global male queer sensibility. Mixing defiance and submission, all three are part victim, part rebel, true believers who suffer for their convictions; and, therefore, transcend oppression and persecution. As seen in the eponymous poem, death is not final but a doorway to redemption.

Snake-like, you shed your short-lived skin
and commence/continue your quest. Now the light from on high

passes through you. You’re luminous. Meanwhile, out west
in decrepit Rome sits Galerius, oblivious his end is nigh.

You seek your beloved — he appeared to you in your cell,
his body glowing silver as he whispered, Endure,

for I will always watch over you. With him you will rise
up to heaven and wonder at how familiar

it all feels. Hand in hand, you two will stroll the streets,
introducing one another to everyone you meet.

Far from saying homosexuals are better of dead, Pasaribu disavows doctrinaire notions of martyrdom in favour of an earthly paradise in which same-sex couples walk hand-in-hand without fear. His lines are metaphor for a lapsed Christian who follows in the footsteps of gay club anthems like ‘Go West’ by the Village People (later covered by The Pet Shop Boys) and ‘In the Evening’ by Sheryl Lee Ralph.

An admission. As an atheist who has lived most of his life in Australia, I had trouble getting my head around the notion that gay people continue to hide in the 21st century, especially to appease religious dictates. It seemed retrograde, like reading a book about homosexuality from the 1950s. But such is Pasaribu’s sleight of hand that he quickly popped my insular bubble to remind me what life would be like if I still lived in Turkey, where I was born. Indeed, most of my Turkish gay friends seek shelter in the closet or sham marriage.

The most revealing poem in this regard is ‘On a Pair of Young Men in the Underground Car Park at fX Sudirman Mall’. Here two young men sit in a Toyota Rush ‘parked in the corner of level P3,/stealing a little time and space for themselves,’ and poignantly ‘exchanging kisses wide-eyed — keeping watch as one/for security guards or janitors’ that might interrupt their stolen moments.

Two things stand out in this cornerstone poem. First, the poem recalls the tone set by C. P Cavafy, the Greek godfather of all queer clandestine confessionals. Second, the secretive location, (simultaneously public and private), brings to mind early Christians worshipping in catacombs beneath Rome streets, awaiting their turn to rise and take over.

Literally and metaphorically driven underground by unorthodox desires, Pasaribu’s primary stance is seeking; his is a restless questing as his cast of characters search for a shared history that is textually present but remains elusively out of reach. And because the queer body politic walks a fine line between visibility and invisibility, acceptance and rejection, it could be said that this collections is about absence in presence, and presence in absence.

Despite advances in some parts of the world, the homosexual is still contested territory. Both present and absent in society, the homosexual is made painfully visible and inextricably invisible through obsessive, circular, discourse that seeks to simultaneously comprehend and to exclude. This contradiction is central to Pasaribu’s poems. Caught in the crossfire are men and women who continue to assert the validity of their lives against a tyrannical ideology.

The other emblem Pasaribu draws on is the tree—not surprising, given the book’s original title was Like Trees. But Pasaribu had a last minute change of heart, perhaps to align the book with evolving queer narratives; and, more important, to signal that in each of the fifty-nine poems the emphasis is on pairing, bringing people together, whether in love, quest, or Socratic dialogue.

As an animist, I lean more towards trees than to Christian iconography. That is just as well since the tree is a universal archetype that can be found in different traditions around the world. They are symbols of physical and spiritual nourishment, transformation, liberation, and union. Moreover, Jungian psychology sees the tree as a symbol of individuation, bringing together the feminine and masculine principles.

In light of this, it is interesting to follow Pasaribu as he weaves a path between doctrinaire religion and tree-worshipping paganism. This is best seen in “He and the Tree” where an individual stands at the border of civilisation and the natural world, seeking forgiveness from the tree that shelters his car from the sun in the company parking lot. As the tree listens, it remembers his friend who was ‘ripped from the earth for being too close to the foundation’, thus losing a chance to tell his friend ‘how much he loved him’.

If he were here, he would take him to a church. At the altar
they would be joined together before god, who had three branches
— like a tree — and their children would fill the lot, every
single square inch, so that someday everyone who passed
would think a forest had sprung up in the city’s heart.
The man hugged the tree and tree hugged the man.
(p.4)

This poignant, wryly observed poem would have been an ideal way to end the collection. It brings together the book’s main symbolic and ideological positions in an act of compassion and empathy that yields fruit; and that in a way is what Pasaribu hopes to achieve in this slender but weighty tome that both affirms and transcends the classification of queer poetry.

DMETRI KAKMI is a writer and editor based in Melbourne. For 15 years he worked as a senior editor at Penguin Books. His fictionalised memoir Mother Land was shortlisted for the New South Wales Premier’s Literary Awards in Australia; and is published in England and Turkey. He is the editor of the acclaimed children’s anthology When We Were Young. His new book The Door and other Uncanny Tales will be published in 2020.