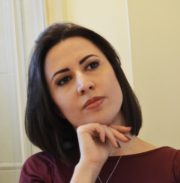 Elif Sezen, born in Melbourne in 1981, grew up both here and in Izmir, Western Turkey. She settled in Melbourne in 2007. Also an interdisciplinary visual artist, she writes original poetry in English and in Turkish. In 2014 she published her Turkish translation of Ilya Kaminsky’s acclaimed book Dancing in Odessa; her own first collection of experimental short stories in Turkish, Gece Düşüşü (‘Fall.Night.’), was published in 2012. Elif’s collection of poems Universal Mother was recently published by Gloria SMH Press, and she also published a chapbook The Dervish with Wings early 2017. She holds a PhD in Fine Arts from Monash University. www.elifsezen.com

Now that I am tired
I must open up inwardly like a lotus blossom
yes, I must open my paper-like lids
towards the benign feature of absence
for I will encounter her, in the very bottom:
that archetypal mystic, resembling my mother
by her glance perforating the silvered smoke
my small self will pass away
because I am tired
because fatigue is a lovely trap made to
save my body from its old cage

I learn to become still, yet
teleport simultaneously everywhere

I get rid of the worldly clock
losing beguiling sleep

I become a voluntary mute
so I can speak for them

On the lands reigned by power issues
and tasteless hierarchy, they choose
the most desert-like spot
because a desert is a home for
repentance

The anima mundi is saved here
in discovering elements of
water, fire, air, earth and ether
through the heart’s eye,
once again

A lament is sung here,
one which only their forefathers can
hear. So each grief can be freed
like a crumbling piece of bread
for the animal-smile hanging
on the corner of the wall
is my primitive self whom I once
ignored
this is a new way of loving one’s self

Swans were drifting away on the lake
like forgotten desires, and we were
preparing ourselves for an
ordinary day

Who said angels don’t exist?
O angels!
They are hidden in the elixir
of infinity that clears the conscience
of the unspoken
they light the soul-flame in its essence
they secretly orchestrate the flight of
glowworms, electrifying
and dying away towards the East
and towards the West

Whatever East and West means,
this is no secret:
direction does not exist the way we know it
direction is dimensional, not linear

This is no secret:
dying holds you back
not the way you know it
this time keep your angel by your side
and set off on your journey once again

4 The one without an answer

tickets tucked in the hands of
the one without an answer

5 The phenomenology of chronic pain

This Aria has no beginning, no end
whereas in the beginning there was the sound
the sound of Love dividing into bits
in between the matter and soul

Over time, the sound trans-mutated into
moans, arising from hidden wars
and declared wars

Yet today, right here, it
vibrates through the nerve-ends
of a young body

First, talk to the pain
Dear pain, what do you want from me?
caress that pain, love it
surrender it to the whole
recycle it
and never forget,
suffering and not becoming monstrous
is a privilege

You must be empty while you hope,
for what already belongs to you is ready
to come back to you

“For to its possessor is all possession well concealed,
and of all treasure– pits one’s own is last excavated
— so causeth the spirit of gravity”

Forgiveness is what’s necessary to fly
also purification.
Even purifying from the desire of flying

yet a pair of wings is enough for most,
to fly.

Istanbul Airport is the doorway of my
time tunnel. No talking!
Act like nothing happened
hereby I discovered the reason
for the lack of bird-chirp
that others dismiss
because I am a bird too
I too forget the necessity
of flight
in all directions of the
forbidden atmosphere of mystery,
simultaneously
‘We must declare our indestructible
innocence’, grumbles my mum
her eyes staring towards the
beyond-horizons
The birds pollute the new President’s sky.
A deaf child disappears from sight
in the alley, after listening to the song
which only he can hear
I call him from behind, with no luck
and find myself in
Melbourne again, inevitably
I chop and add mangos into
my meals again
I forget the malevolence of a
suppressed father image again
I forget my most favorite scent,
jasmine
how holy this forgetting is, I know
for it will pull me back to that doorway
for I’ll want to go back home again,
home without geography
without footsteps
how sweet is my abyss.

so that one more century passes.