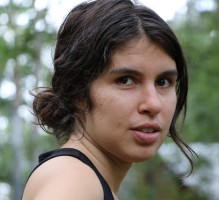 At 3 p.m. I looked out of the window to see the three men standing with bags by their boots.  They were dressed in camouflage and looked slightly ridiculous considering the weather. Their waterproof pants made their legs look like parachutes. They looked at Pearl’s bright dress.‘Why you wearing that? ’ She shrugged.

I followed them down the streets. I had the advantage of knowing the town and the paths very well. Pearl was in front. Goh coughed on occasion and Bandit smirked. I saw them look at each other and communicate a shared want they could not say out loud.

When they went into the bushland with their gear, the decoys they carried began to weigh them down and they walked slowly – all three were unfit or weak. Pearl carried nothing and walked easy. I noticed she had slipped off the clogs she wore at work and was barefoot.

When the lake was in sight I stopped to find a vantage point. I found the old wooden lookout that had been there since I was a kid and surveyed the surroundings below. The men stepped out  and surveyed  the area and where they would set up the blind. Pearl half-turned; her eyes found me and she nodded in recognition. The little flecks of light flicking up from the lake caught their expressions and I felt I could see them perfectly. The men crouched to set their plastic painted decoys down in the mud. From where I was, the decoys looked quite lifelike. Pearl had found her spot a little bit further down, closer to where I was. She also knelt and opened her hands, and I saw she had made a grass duck, out of reeds. It was beautiful.

Bandit looked – his mouth gaped for a moment and then he laughed at her creation. I couldn’t help but share his sentiment,  as  remarkable as  it was,  there was  only one.

They stepped back thirty metres or so into the vegeta- tion and started to get their gear out of the bags. George handed Pearl a shotgun. ‘Don’t miss,’ he said. And they put on their gloves and face masks, and held their calls and their guns. Pearl stood straight and stripped her dress off, spread out her arms and slipped off her undergarments.

‘Shit,’ George said and they exchanged a placating look between the three of them that made them carry on as if nothing had happened.

With her  feet,  Pearl covered  the  red  garment  with leaves. Bandit gave a nod to indicate the start of their hunt and they widened their stance.

Pearl put the call in her mouth.  The wind picked up and melded with her hail call, a long, low note. The wind began to pull at the tassels of the lake, and I held my hair in place. The wind shuddered the ten or so decoys the men had laid out, and they fell down in a row.

The men swore loudly but Pearl kept calling. She went to a new call – a rapid round of short, sharp notes. This is what the men in their conversations at the shop had called a feed call, when a hen has found food. I heard the ducks above, and I looked up to see their formation swooping down. The mallards slowed their wings and came towards the outstretched Pearl like a train to a station. There were at least two dozen. Pearl raised the gun and fired. But nothing was shot. The mallards landed unaffected around her. She looked down, confused, at the gun.

That’s when the camouflaged men made their move. With their masks they looked like executioners and that’s what they were. They grabbed Pearl by the shoulders. Goh on the left, George on the right and Bandit at the front.

I got to my feet but there was nothing I could do. Though the wind, as always, was  on her side.  The gale swept back – it was a wind that bit – and George let go. He flailed his arms out and toppled backwards into the lake.

In the confusion Pearl got away and then she was running and Bandit and Goh were chasing hard and I could not see everything exactly. The heat from the day had carved a dull headache in my mind.

On the way home I find a lover, in a hotel in a one-street country town. She smells like apricots and is too pure for me. I started surfing when I realised I needed something to quell my undiagnosed sex addiction. When I go out to the beach it’s usually to clear my head from anyone muddled up in there.  Mystery does not always equal desire,  and for every woman I’ve been with there has been one who turned me down. Like that Fleetwood Mac song, women, they will come and they will go.

This woman doesn’t turn me down. We giggle as we pay the clerk for a room upstairs. As she unlocks the door I search her hands for a ring or tattoo or some sort of sign that will remind me that she is not mine. She is the kind of girl I would have thought about being with when I was younger and hadn’t yet fucked up a million times. She gardens and she volunteers at the school near Hune Hill where lots of my mob went. She says she will take me to see the farm where she lives and show me her orange trees.  They are the biggest oranges, the size of basketballs and they taste like love.

‘Yes,’ she says, slipping off her singlet top.

We take the covers off the bed and she gently puts her hand on my chest and drives me back onto the mattress. She lowers herself and her legs come around my waist – I squeeze her ankles and we kiss like we’ve kissed each other before. How can it be that I don’t feel the weight of her. That there is no taste on her tongue. No drug, no cigarette, alcohol or coffee. I thought she’d taste like apricots or oranges. I’m getting sick, it might be the flu I’ve resisted all winter. Because I can’t continue. My breath is ragged and the shapes and colours of her are blurring.

This extract appears in Heat and Light, page 15-19 first published in 2014 by University of Queensland Press, and reprinted here with permission.