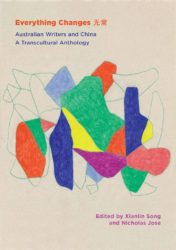 Everything Changes: Australian Writers and China, A Transcultural Anthology

“Many Chinese names
became strange or lost
in the crossing.
. . .
Perhaps the plum will flourish
on this soil, like the white plum
in our yard, and transplanted,
my daughter can recover
what is lost in translation.
Perhaps she already has.”

Born in Singapore, the poet Kim Cheng Boey migrated to Australia in 1997. Like many other writers of diaspora, his poetry invokes recurring themes of loss and reinvention and a quest for belonging between past and present. In “crossing” continents and languages, many Chinese names and cultural specifics get lost in translation, just like the spelling of his daughter’s name mei, which can simultaneously mean plum blossoms and disappearance. Yet similar to a transplanted white plum, the migrant daughter can bring the synergy of multiple cultures to re-root and flourish in Australian soil, proffering hope and recovery after mourning. In another poem titled “Chinatown,” Boey characterises crossing and translation as a default state of the diasporic mind. Menus in Chinatown restaurants are “homesick inventions” that invite translation and cure the “forgotten hunger” for return, revealing how “transit has a way of lasting” and border-crossing and the in-between can become “home.” Boey’s poems are the opening of the collection Everything Changes: Australian Writers and China, A Transcultural Anthology (2019), edited by Xianlin Song and Nicolas Jose, which gathers the stories and poetry of twenty-five Australian writers. While these writers differ in generations, backgrounds, and literary styles, their works converge through common connections to China. These connections, lived and imaginative, materialise in forms of ancestry, travel, cultural exchange, aesthetic influence, and a ceaseless longing for the other that bring together Australia and China in a world whose identities are increasingly nomadic and “transcultural.”

What is meant by “transcultural”? The purpose of the collection, as the editors proclaim in the “Introduction,” is to outline “a field of transcultural writing that invites transcultural reading in response” (1). A recent buzzword in literary studies, the concept of “transcultural” is not new. In 1940, anthropologist Fernando Ortiz coined the term “transculturation” to describe the mixing of cultures in his study of sugar and tobacco in colonial and postcolonial Cuba. Akin to the postcolonial concept of “hybridity,” “transculturation” refers to the blending and confluence of cultures at the contact zone, though it is hailed as transcending postcolonial dichotomies of centres and peripheries and more suitable to capture the synergetic and fluid nature of culture in globalised societies. “Transculturality” is in a continuum with, yet distinct from other pluralist concepts of “interculturality” and “multiculturality” that, as German Philosopher Wolfgang Welsch suggests, presupposes a classical conception of culture as bounded and internally cohesive and risk reinforcing phenomena of “separation and ghettoisation” (4). By comparison, the “transcultural,” according to Song and Jose, is a “process” of dialogic interaction through which cultures become “inseparable” and thus “a factor of the times in which we live, an effect of mobility, migration, globalism, and connectivity, or multiple locations, identities and audiences” (2). In other words, the “transcultural” expresses a cultural sensibility that is more attuned to contemporary cultural horizons where borders of culture, ethnicity, nation, and language are investigated as permeable and identities more internally differentiated and complex. Transcultural writing speaks to literature’s capacity for border crossing, and in this case, for deepening the cultural exchange and people-to-people engagement between Australia and China that has accelerated since the 1980s.

That said, scholars of the transcultural literary discourse variably acknowledge the asymmetry and unequal powers during cultural exchange: “the fluidity of transnational identities in the writers and their writing allows for ‘imbalance, disparity and transformation’” (Song and Jose 2). This nod to dissonance is critical, as Song and Jose refuse to develop transcultural literature in a celebratory manner of reconciling cultural differences. In this sense, the anthology resonates with concurrent projects on transculturality such as that developed by scholar Monica Juneja, who uses transculturality as an analytic mode to investigate:

“the multiple ways in which difference is negotiated within contacts and encounters, through selective appropriation, mediation, translation, re-historicising and rereading of signs, alternatively through non-communication, rejection or resistance—or through a succession/coexistence of any of these.” (25)

These forms of tranculturality manifest in Everything Changes through manifold themes: cultural hybridisation born from the diaspora; Australians’ travel and interaction with a transforming locality in China; imaginative dialogue with Chinese literature; and other embodied, fantastical, and postcolonial mediations of racial and cultural differences. The selected stories and poems are published from 1988 to 2018. Most excerpts were initially published in a collection or as part of a novel, including clippings from Kim Cheng Boey’s After the Fire: New and Selected Poems (2006), Brian Castro’s After China (1992) and The Garden Book (2005), Nicklas Hasluck’s Somewhere in the Atlas (2007), Nicolas Jose’s The Red Thread (2000), Ouyang Yu’s The Eastern Slope Chronicle (2002), Beth Yahp’s The Red Pearl and Other Stories (2017), Alex’s Wright’s The Swan Book (2013), and Bella Li’s Argosy (2017), and so on. These excerpts are chosen for expressing a transcultural mood, despite often in a few pages and decontextualised from its original containers. The fact that these fictional excerpts and poems are retrospectively grouped under the category of transcultural writing reveals how the concept of “transcultural” itself is fuzzy, itinerant, and in process of constant redefinition, which is echoed in the Buddhist teachings in the book’s title “Everything Changes” and the fact that selected works have previously been classified and read under miscellaneous, overlapping traditions of immigrant, ethnic, Asian Australian, travel, postcolonial, and transnational literatures.

Transculturality are ever-present in stories and poems by Asian Australian writers selected in the anthology, as life in diaspora provides conditions for porous boundaries, global mobility, and the negotiation of cultural differences with the mainstream. “There is nothing more difficult . . . than to paint a rose”—Singaporean Australian poet Eileen Chong cites Henri Matisse in her lyrical poem “Only a Peony,” a tribute to the Chinese national flower mudan and the imprints of ancestral culture on the senses and imagination of those migrated. To transplant ancestral culture in a literal sense is as difficult as painting a rose, “What does a peony smell like? I have . . . but breathed nothing . . . Perhaps I needed to have crushed them . . . eaten their petals one by one . . . China’s national flower. Is it? Am I? I’ve forgotten.” What can be relived is perhaps the feeling and energy of that which is lost, re-enacted in text and perceptible, as Chong notes, in exotic objects like peony perfume and patterns on woollen carpets. Other stories of diaspora are more satirical and poignant. Julie Koh’s “The Three-Dimensional Yellow Man” and Isabelle Li’s “A Fish Bone in the Throat” are short stories that cut painfully into the dilemma of diaspora: racism, stereotyping, marginality, and exoticisation. Koh’s is a fantastical, rebellious parody of the entertainment industry that has been white-dominated and prejudiced against Asians who are often pigeonholed as one-dimensional background characters, either submissive or evil. The yellow man’s failure to attain aesthetic freedom beyond his ethnicity knowingly mocks the global book market’s fetishisation of exotic Asian literature—the “transformation of power-politics into spectacle” (14) that Graham Huggan explores in The Postcolonial Exotic. In Li’s story, racial unbelonging coincides with frustrated Asian masculinity and mid-life crisis. For the story’s diasporic male protagonist, acquiring empowerment is a solitary voyage and a prolonged agony of having swallowed a fishbone, a blocked existence.

The other theme of the anthology focuses on Australians’ travel in China. Along this thread, cultural crossings are framed in ways less about race and ancestry, and more about travel, curiosity, and self-reflexivity. While Australians going to Asia in search of spiritual growth and cures for identity crisis is not an unfamiliar topic in Australian literature, these “Oriental Quests” (Zong 1) are usually located in South East Asia, in countries like Indonesia and Cambodia and rarely in China. Everything Changes contributes a valuable cluster of fictional and nonfictional prose narratives to the Australian literary imagination of a changing China: Nicolas Hasluck documents the cultural and ideological divergence in an Hangzhou tea house in Post-Mao China; Linda Jaivin fictionalises a Sinophile’s nightly encounter in a sinuous hutong of Beijing; Gail Jones appropriates dreams to remap the emotional landscapes of Chinese writer Lu Xun on her visit to his Shanghai abode; Nicolas Jose evokes intertextuality to adorn an interracial love affair across places and times in China; Felicity Castagna portrays the friendship between an Australian teacher and a local student in Shanghai; and Jennifer Mill blurs reality with fantasy to unearth the seduction and trappings of foreign visitors getting “too involved” with anti-demolition activism in Beijing. A common feature of these stories is that they bespeak the desire and struggle for, and not always the success of, transcultural connection. There is a degree of humility, self-doubt, and patience in the face of the culturally unknown. The Australian English teacher in Castagna’s story says to her Chinese student, “I’m not sure we are really communicating effectively. I’m not sure that I understand [your diary].” The process of manifesting thoughts on paper is already an anachronistic process, and writing in another language and again being read from another culture is tripe translation. The student later writes in her diary, “Teacher says, sometimes it takes a long time to find out your purpose. Sometimes it takes a long time to work out why you’re HERE.” This statement distances transcultural travel experience from easy consumption and judgment of otherness, as the selected writing in the anthology invites intercourse yet acknowledges disjunction and reinforced prejudices.

It must also be said that transcultural writing, presented in the anthology, is as much a mode of representation by the authors as it is cultural training for readers. The collection sends an invitation and charges a toll: readers must do their work in order to make sense of the obscure cultural references embedded in some works. For example, it is challenging to gauge who exactly is Robert Gray referring to in his poem “The Life of a Chinese Poet” (it appears to be the patriotic poet Lu You in the Song Dynasty). The reading itself is a transcultural experience and demands linguistic and cultural competence. The consequence of this is that at times the anthology is not an easy read, even though a reader will come out of the other end feeling somewhat a “transculturalist.” Although the anthology has an appendix of writers’ brief biographies, some notes on cultural riddles and on the original containers within which excerpts were published are wanting. The questions arise: who is the targeted audience of such an anthology? Is the anthology targeted at a small circle of cultural elites who, after digging into these sophisticated cultural messages, eventually shouts with satisfaction, “viola!”? And isn’t the narrowness of audience, either intended or unintended, a privileging of the transcultural, and thus a contradiction to the cultural métissage and openness desired by transculturalists? Is transculturalism a mere pluralist descriptor, or is it an intermediate step towards realising cosmopolitan ideals? One risk of such an anthology is the danger of parochialism in its reach and ineffective communication with overlapping reader groups: transcultural, migrant, and mainstream.

Nevertheless, Everything Changes narrates that transculturality has become an inevitable reality in our globalised world. Transcultural experience contaminates our pasts, desire, travel, place-making, bodies, names, fantasy, dreams, sensation, and emotions. The selected works in the anthology transpose readers into miscellaneous locations and temporalities, imagined and real, and gift readers with a sense of wonder and lessons from transcultural engagement. The anthology succeeds in enticing cravings for border crossing. Although some transcultural transformation only effectuates in dreams and not on an interpersonal level, they are dreams of becoming and long-lasting enigma. Yet in desiring and dreaming, we would have already morphed.

Dr EMILY YU ZONG is an honorary research fellow at the University of Queensland, Australia. Her work on Asian diasporic literature, gender and sexuality, and literature and the environment has appeared and are forthcoming in Ariel, ISLE, JASAL, Journal of Intercultural Studies, etc. She is working on her book on Asian Australian and Asian American women’s fiction, and she has been a regular contributor to Mascara.