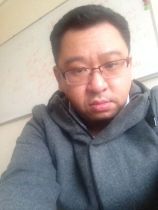 Eric Low works in the audio-visual industry, and lives in Shanghai.  He has had his poems read on radio and has previously been published in several print and online journals, like the Asia Literary Review, Shampoo, Santa Clara Review, and others.  He was the 2009 winner of the Singaporean Golden Point Award for poetry, and occasionally functions as an editor for Softblow.

It is rare to see a man smile
in his sleep, on a Chinese park bench,
in the unicorn-blue days after the snows.

He is smugly dressed. His Mao coloured jacket
betrays a North Face label, badly copied.
His pockets are flattened, no wallet bulges.
A tan line marks his hand where he once wore a watch.
Nothing of value protrudes from this being.

Perhaps it is the knowledge of this,
that lifts the curls of his smile,
and grants him the comfort
of sleeping openly, here in this country.

Darling, Lets Call It One Of Those Mornings.

Darling, lets call it one of those mornings,
when we wake before any of our alarms go.
Maybe because we hear birds singing.

Rare, because this early on the 25th floor, only
suicides willingly squat it out on HDB ledges.
Nevertheless, what is there, is there.

Tweeties arriving in pairs to the prospect of construction.
Nary the jackrabbit bores bearing down on our doors,
that shake dust from our roofs, and take

our wooden board floors in waves.  Instead coffee

sips through our gaps; the neighbour we all dream of hating,
is imitating my mother’s butter roasted grinds.
Yellow brick roads, ruby slippers.  Our pet topic.
Never mind what Rose K. said about not arguing at night.
We’ll remember them for our next big bout.
Right now, it’s all about
how well the sun shines through and yet not shine.

All first instincts were the search for compatibilities.
Who was who, the likeness of individual behaviours, as if
choices then, were as limited as they were now.
After that, promises, promises. That I would always keep this poem close
repeating the words as I sipped cold soup at the Yuyao Lu cafe.
I am a liar of course.  But only you, would know how to call me out.
Remember this place? Where we walked to for breakfast
after your first night at my house. I had to feel my way here then,
towing you along by your fingers. A blind man
with no cane, leading a girl only pretending to be blind.
Between now and then, one of us got smarter or duller.  I forgot which.

These days, I trudge here on base instinct alone and the Frenchman
who served us on his first week in Shanghai, once so eager and kind,
no longer recognises me as the man in the blue long sleeved shirt
with the teenage girl clinging to his arm, asking him about life in general.
Perhaps it is three, and he and his waiters are impatient
to go home for those small hours precious to them.

The milk that formed the base of my soup has turned impatient too.
A layer of film freezes over its surface.  I break it up with my spoon,
stirring to emulsify it back into liquid, but we both know,
nobody could drink this anymore.  Still,
stirring always helps.

I started laughing; at you, almost the Kathy of my own Hugo poem.
For hoping that one day as you break the road on your yellow bicycle
through those sanely acres of your farm filled world, washing
your feet in the creek behind your house, splashing
your face with their waters, still trying to shun all that is me and mine,
you might come to understand how much you, this deli, that poem,
even the Frenchman, matters.