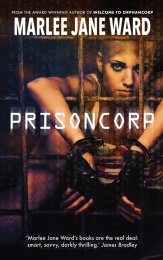 Prisoncorp is the third volume in a young adult speculative fiction trilogy that engages with issues in contemporary Australian society. Marlee Jane Ward posits a near-future setting where current legal and economic trends have gone to an extreme, but which contains enough of the current features of our country to ring uncomfortably true. The first book, Orphancorp won the Victorian Premier’s Award in 2016 and was heralded as timely, in the same year that confronting footage of human rights violations in Don Dale Youth Detention Centre became public, raising questions about the criminalisation and institutionalisation of vulnerable youth.

Ward’s series centres around orphan Mirii, who believes herself to be Aboriginal, but has lost her connection to family and country. She knows her last name means ‘shooting star’ in an Aboriginal language, but only because she looked it up on the Tab that is her only connection to the outside world. In Orphancorp, Mirii counts down to the day she will obtain ‘age release’ from the privatised foster system in which she has grown up. A rebellious girl with a dirty mouth, Mirii is subjected to brutal forms of discipline in the days leading up to her release from the ironically named Verity House, where information is near impossible to come by.

In the sequel, Psynode, we re-join Mirii a few months after her age release. She is staying in a women’s dormitory and feeling that, while at Verity House it was ‘us and them’, now it’s her against everyone. Mirii gets a job and waits impatiently for the day she is supposed to meet up with Vu on the steps of the old Sydney Town Hall, one of the few old buildings still standing. However, her plans go awry, and she is arrested for a suite of offences committed in the process of trying to free Vu, the girl she ‘like-likes’, from her captors.

Prisoncorp opens with Mirii being held in a solitary confinement cell at the notorious corporatized prison located in a remote part of the Australian desert. She is not, however, alone. Her nemesis, Freya, is with her and the novel plunges straight into action with a fist fight between the two girls. Mirii reflects that although she earlier had an epiphany about how their enmity ‘played into what the system wanted of me’ (p.2), Freya has not achieved this insight. Relationships between women are consistently foregrounded in Prisoncorp. Mirii’s friendships are staunch, but we are afforded no illusion that any general sense of sisterhood can be counted on. An unknown prisoner of whom Mirii asks a favour promptly tells her, ‘go fuck yourself’ (p. 6). A day out of solitary, Mirii discovers her crimes are so serious as to warrant a ‘real, human lawyer’ (p. 31), whose face pops up on a screen to tell Mirii that she will be doing 25 years for manslaughter.

Mirii is soon reunited with kids from Verity House. Young people who grow up in the system are seen beating a well-worn track into prison, a familiar pattern that reminds us of how far along the path to this future we have already come. The privatisation of the prison system, which began in Australia in the early 90s, is now complete, with the prison headed up not by a Warden but by a Chief Operations Officer (COO), who ‘represents the board’ (p. 36). Ward’s depiction of prison from the point of view of an Indigenous woman alludes to current concerns about prison demographics. The fastest rising incarceration rate in Australia is currently that of Indigenous women This concern is made explicit when another prisoner tells Mirii, ‘There are a lot of us in here…it’s a crime to be Koori in our own bloody country’ (p. 97).

Ward presents the prison industrial complex and the immigration detention industry as inseparable, with the screws announcing unceremoniously that 200 immigration detainees are to be amalgamated with the prison population. This prompts Mirii to reflect:

I feel about as hopeless as they do. I wonder where they’re all from, how they thought their new life in Australia might go. Did they expect to be rounded up and put into this dusty camp, to waste away on starvation rations? Weren’t they seeking something better, and is this better, or is it more of the same? (p. 61)

The book’s engagement with current human rights issues gives Ward’s predictions an uncanny immediacy, but it also leaves us craving more detail. How did we get from the Australia we know to this near future? Why are there few old buildings left? Where does the climate crisis stand? Where is this hellish private prison located?

Mirii’s sexual involvement with Vu is presented as unproblematic throughout the series (except to the extent that touching anyone is forbidden in the Orphancorp). Ward also presents a number of other same-sex sexual encounters and their queerness passes without comment. Monogamy seems to be a thing of the past, as do fixed sexual identities. In Psynode, Mirii recounts a history of sexual experiences that would make Tony Abbott and other opponents of Safe Schools shudder: boys, girls, threesomes and kink. The unproblematised sexual fluidity of Ward’s characters provides welcome relief from the overall bleakness of her premise. It allows the focus to remain on the struggle of these young women against a brutal and oppressive system while suggesting some more liberal developments in Australian society in the near future, taking Ward’s vision beyond a simple dystopia.

The plot progresses swiftly, with Mirii’s initial hopelessness turning into resolve as she and her friends conceive of an escape from Prisoncorp, which snowballs into a full-scale riot. Characters express doubts over where they will go after breaking through the fences, given they are in the middle of the desert. The situation calls to mind the mass break-out of the overcrowded Woomera Immigration Detention Centre during a protest by refugee activists in 2002, which led to clashes between Corrections and asylum seekers fleeing across the South Australian desert.

The novel climaxes with an uprising that confronts us with some of the ethical dilemmas associated with rebellion. How to treat one’s captors once they become one’s prisoners? To what extent can individuals be blamed for acts committed in obedience to orders? Can you justify risking the life of someone whose name you don’t even know to attain freedom for the group?

Prisoncorp includes an epilogue of only a few pages in which we glimpse the aftermath of the series’ dramatic conclusion. This is precious little space to explore the myriad ways characters have developed over the three books or how society may look outside of the institutions where most of the action has taken place and this feels like a missed opportunity. However, Prisoncorp offers a powerful vision of the future of the carceral state and a warning of the dark places to which prison privatisation threatens to lead.


FERNANDA DAHLSTROM is a writer, editor and lawyer who lives in Brisbane. Her work has appeared in The Guardian, Kill Your Darlings, Overland, Art Guide and Feminarsty.