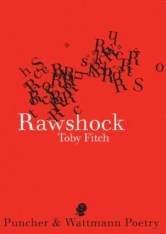 The few lines of biography on the back cover of Toby Fitch’s first full-length collection of poems, Rawshock, remind us that he was ‘born in London and raised in Sydney’ whilst a recommendation gleaned from the launch speech given by the poet, novelist and academic, David Brooks, describes Fitch as the ‘Apollinaire of Avalon’ and the ‘Lorca of the Inner West’. There would be nothing more to say about these sketchy empiricisms if it weren’t for the many ways in which the poems that comprise the collection take up origins, mobilities and the impossibility of presence as their themes.

The poems that most fiercely and vibrantly perform these ideas occupy the twenty-page sequence, Rawshock, the title of which constitutes the phonetic rendering of the famous Rorschach test, a series of inkblots devised by the Swiss psychologist, Hermann Rorschach, and deployed by ingenuous psychologists during the 1960s as a means of detecting underlying thought disorders, ‘especially in cases where patients are reluctant to describe their thinking processes openly.’ You don’t need to be Michel Foucault to feel hyper-invigilated by the idea of one of your fellow humans falling back on interpretation as a diagnostic tool. Or need a Graduate Certificate in Bakhtinian formalism to recognise the symptoms of ‘thought disorder’ – alogia, echolalia, derailment, semantic paraphasia, to name a few – as the stock-in-trade of the poet, the novelist, the playwright. Precisely what it is that constitutes a thought disorder is, these days, mercifully up for debate and it seems to be agreed that such phenomena can be indicative of, for example, ‘incomplete yet potentially fruitful thought processes’. Fitch’s ingenious move is to have ‘married’ the out-of-copyright inkblots with one of the most enduring myths of Western aesthetics. This unlikely coupling has produced a series of poems that re-stages the fates of Eurydice and her estranged husband, Orpheus.

The book’s epigraph, drawn from Lewis Carroll’s Alice’s Adventures in Wonderland alerts us to what will be at stake in this operation. As Carroll writes, ‘The queen had only one way of settling difficulties, great or small’. Fitch’s decision to include the queen’s command comes to be read not only as the strategic management of the difficult matter of the reader’s entrance into the text but also as the highly ceremonial if somewhat macabre celebration of this initiation. As Derrida wrote of Mallarmé, the name marks ‘the production and annihilation of the thing’ (116). In the poems that follow, Fitch stages a reconsecration of ‘the Mallarméan doctrine of suggestion, of undecided allusion’ (120) so that the atmosphere of the book – from the typographical bonfire of Matthew Holt’s front cover to the final poem in which the day is ‘uncorked like a bottle rocket (“nightcap”) – is ‘alive with evaporating sparks.’ (“Blackout” 27)

The book is divided into three sections – Everyday Static (poems previously published in the form of a chapbook by Vagabond Press), the Rawshock sequence, and Oscillations. It is commonplace to think of the poet as working out philosophy through the poem. More accurately, as the philosopher Alain Badiou has it, ‘philosophical poeticizing’ is best left to the philosophers, leaving the poem free to consist in ‘these two thoughts … the presence of the present in the transfixion of realities; and the name of the event in a leap outside of calculable interests.’ (42) The propensity of the poems collected here to work in these modes is evidenced throughout, not least in the accumulation of influences and ideas that structure the book. Although recent reviews of Rawshock have noted the influence of Rimbaud and Apollinaire – and Fitch has noted [1] also William Carlos Williams, Auden, Ashbery and Baudelaire – most insistently in evidence is the influence of Mallarmé, in the emphasis on the poem as an object ‘made of words and not of what words are used to produce’ and in the typographical and mechanical construction of the book, wholly constituted in the white space of the letter.[2] This influence is most in evidence in the Rawshock sequence, where OU ‘doubles’ the form of one of the Rorschach images:

Mallarmé famously wrote that a throw of the dice will never abolish chance. More specifically, he wrote that ‘Out of a number of words, poetry fashions a single new word which is total in itself and foreign to the language [langue] … Thus the desired isolation of language [parole] is achieved; and chance (which might still have governed these elements, despite their artful and alternating renewal in meaning and sound) is thereby instantly abolished.’[3]

Badiou nominates Mallarmé’s method as one of ‘subtraction and isolation’ and what this method achieves is the poetic inscription of ‘the absence or hush’. Perhaps this yearning for the concomitant ‘production and annihilation of the thing’ in some way accounts for the snake’s lament in the second poem of the Rawshock sequence

Towards the end of the poem the poet has achieved something of a Mallarméan disappearance as ‘the ocean ebbs away’. Still, the hint of a 21st Century sequel – ‘C  you in the  sHades’ beauty’ –  suggests that these days ‘the hush’ doesn’t always come so easily.

The first sequence of the book – Everyday Static – provides an account of why this might be the case. It can be broadly cast as the identification of the ethics and pitfalls of the Postmodern. The situation is immediately revealed to be one in which a poet or a poem ‘could almost crack open the night’ and drink (“On the Slink” my italics) if only there weren’t all of these tangential moonbeams to deal with, batting their eyelids at bull-bars and generally ‘tearing the chest muscles of … any man with a memory’ (“Tangents”). “Beelines” calls to mind Francis Webb’s ‘a thousand warm humming stinging virtues’ (“Poet”) and Baudrillard’s ululating Simulacra and Simulation in which ‘the world is hardly compatible with the concept of the real that we impose upon it’. This identification of and with the loss of the real triggers the self-imposed ‘fatal strategy’ by which Baudrillard hopes ‘not to reconcile, but on the contrary, to seduce, to wrest things from their condition’. Thus, for Fitch:

the blue car makes a beeline
for a lamppost, the traffic light

goes gridlock-orange, a bullet train
is trapped on never-green tracks,

and jets fall out of a marooned sky;
why, on waking today, my vision stings

and my face is puffy: dreaming

is forced to move along paths
that are too well-paved.

I’ll sleep with my eyes open,
stop my shadow running away.

Inevitably, there are salves, balms and antidotes, all administered with varying degrees of efficacy. In “Twirl”, ‘we were, we were’ becomes ‘we whirr, we whirr’; still, the foxy light catches up with us and we can’t escape the smell of someone else on our skin (“Aubade”). An aubade is strictly speaking ‘a song from a door or window to a sleeping woman’ and Fitch here and relentlessly elsewhere demonstrates the propensity for an ‘achieved anxiety’ that can be said to permeate the book as a whole. If, as the epigraph to the second sequence drawn from Blanchot’s ‘The Gaze of Orpheus’ suggests, art arises out of Orpheus’ botched attempt to retrieve Eurydice, this first sequence hints that it is not only the distancing of doors and windows that produces poetry but the inescapable scent of proximity.

Some of the poems in the second sequence, then, seem riven with the desire for severance – ‘Skull the ether! Cut me out o this / chrysalis    so I can sing   of asterisms  winking / & dice rolling,  so I can wing it thru buildings / like a lunar scythe.’ That the poems achieve their particular identity by replicating the shape of the Rorschach images seems of some assistance. Two poems later,

The use of Mallarméan espacement, then, astutely oscillates the flow rate of Eurydice’s proximity. As Attridge, writing on Mallarmé, points out, all language ‘can be understood in terms of “writing”: the marks and white spaces on the page are only one realization of the articulations and systems of difference upon which the operations of signification rely, and which at the same time prevent signification from ever closing on itself or on the world.’ (110-11)

Ultimately what this sequence reveals – for this reviewer at least – is that hell might be a place where hermeneuts go to cook up stodgy readings of poems that, like Eurydice, hide under a veil and constitute ‘the profoundly obscure point toward which art and desire, death and night, seem to tend.’ (171) In “Orpheus’ Gaze”, Blanchot suggests that ‘turning away is the only way [looking at the center of night in the night] can be approached.’ (171) In the third sequence, then, Fitch’s strategy is ‘to bring Eurydice into the daylight, to make the daylight more luminous through the visibility of Eurydice’ (Bruns 70). To do this, the poem is going to have to look away, to give up, as Blanchot has it, on ‘the movement of desire that shatters the song’s destiny’ (176).

The visual similarity of the first sequence, Everyday Static, to the third, Oscillations, suggests that despite everything nothing has changed. These are attractive poems with titles that evoke their subject and deal with it. Occasionally, they are moved to wind themselves across the page cloyingly as with “Emotion Sickness”. Sometimes they use the demarcations of the book to more ingenious effect as with “Nightcap” which spreads its title across two pages and starts ‘The only way to cap / off the night / is to decapitate yourself.’ (84-5) The poem fans itself across the facing pages Hermes-like in the form of a pair of elegant wings and for many weeks I only registered the right-side poem which I’m embarrassed (but also amused and in a weird way, proud) to say I thought was called “tcap”. The eventfulness of the middle sequence, then, produces a ‘tiny displacement’ so that, as Agamben wrote in The Coming Community, ‘everything will be as it is now, just a little different.’ (51) Agamben calls this ‘supplement added to perfection’ the halo. For Agamben, the halo signals ‘a paradoxical individuation by indetermination.’ (53) What we thought was finished and perfect is rewarded with a supplementary glow – ‘The being that has reached its end … thus receives as a gift a supplemental possibility.’ (55) This measured yet brightly glimmering end gives the reader something to think about. Perhaps Lacan was right about the inarticulable supplementary jouissance of the feminine and that when woman speaks of love she does not know what she is saying, even if Lacan does. Or, perhaps, as Fitch seems to be arguing, woman knows very well what she is saying and it is only man who hears the voice of Eurydice as if from the ‘red-carpeted jaws of hell-bending doublespeak’ (Dry, Mainly Sunny).

FIONA HILE was a joint winner of the 2012 Gwen Harwood poetry prize. Her first full-length collection of poetry will be published by Hunter in 2013. She tutors in Literary Studies and Creative Writing at the University of Melbourne.