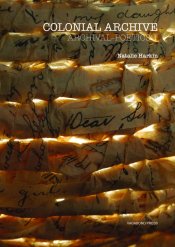 It can be tempting to imagine that colonisation is a thing of the past; that posting an infographic on Instagram on Sorry Day counts as activism; that the horrors white settlers inflicted on First Nations peoples can be considered in the past tense. Natalie Harkin’s Archival Poetics reminds us that colonisation is ongoing and that far from fading away, the savagery of colonial oppression remains constant in our communities and our culture.

Some salient examples: it’s Reconciliation Week, and mining conglomerate Rio Tinto has blown up an ancient Aboriginal site dating back 45,000 years – a site perhaps unrivalled in historical significance. The act of blowing up this site is within the law. It’s Reconciliation Week, and Kamilaroi woman, Cheree Toka, continues to campaign for the Aboriginal flag to be flown on the Harbour Bridge all year round, and not only as a token gesture once a year. It’s Reconciliation Week, and the government has announced funding is to be halved for AbSec, the peak body for the protection of Aboriginal children, even though Aboriginal children make up close to forty percent of children in out-of-home care. It’s been twelve years since Kevin Rudd’s apology speech and ‘Australia Day’ is still being celebrated on a day marking the commencement of the genocide of First Nations people.

This is the discomforting ground in which Archival Poetics takes root. Harkin’s first few lines about the archive, ‘a small spotlight on the state, its institutions/systems/processes/that generate and maintain particular fantasy-discourses and/representations on history, on people; that actively silence/suppress/exclude Indigenous voice and agency…’ (11) make clear the enormity of the challenge of decolonisation. German sociologist Max Weber defines the state as a ‘…human community that claims the monopoly of the legitimate use of physical force within a territory.’ (Weber, 1946) It’s important to make something very clear here. Weber’s definition clarifies that we are that human community. The violence implicit in the destruction of Indigenous sites and in the removal of funding from organisations tasked with the care of children who have been taken from their families has been legitimated by our government whom we have elected. Not me, I hear you say, nor me, but us as a people.

Acknowledging this complicity is imperative before entering the landscape of Harkin’s collection, so as to recognise the continuing reverberations of our colonial past in our present and future, and to pay heed to the way our legal system has and continues to fail Indigenous culture and communities. ‘Memory Lesson 2 | Feeding the Fever’ (19) underscores this failure (‘prepare to be drip fed ACCESS DENIED’) and reveals what we already know – that the archive is where bad things are hidden. The narrator’s attempt to reconfigure the shadowy spaces of this country’s history are held up at every turn by the state and its ‘…dystopian-drive to institutionalise/assimilate/control/categorise/collect/contain Aboriginal lives.’ (19) Harkin uses the humble verb in an unusual and powerful way a number of times throughout this collection, accenting the violence of colonial power and conversely, the agency of the Aboriginal people. We see this again in ‘Trace and Return’ which begins:

and, a few stanzas later, condenses into

Although this poem comes after some of the others I’ll mention, the sense of energy and painful effort foregrounded by ‘Trace and Return’ is significant. The idea of writing poetry as a kind of restful activity is prevalent in a society that doesn’t particularly value creative endeavour, but Harkin tears this notion to shreds throughout her collection and certainly in this poem. The act of putting together these poems was surely both challenging and disturbing; the act of rendering the genocide of one’s people into poetry traumatising in ways I and other white readers of the collection are not able to comprehend. The poem ‘Dear Sir’ (22), the title of which holds a sickening sense of enforced subordination, is borne of a two hundred page file on a child of the stolen generation. The second stanza brings home this jarring sense of recognition of self and family within the devastation of state records.

The enjambment and punctuation of this poem increases the intensity with which the reader reads and removes any sense of pause which a more traditional structural approach might engender. There’s no holding back when reading these poems, there’s no moment’s reprieve to be taken from the spaces between words. Inspectors, ‘State-Ladies’ and Protectors are one and the same, a realisation which underscores the privilege of not-knowing and the importance of being made aware. The photograph that accompanies the poem, an item woven from the papers of the archive, displays the old-school cursive mentioned by the narrator. The most salient phrase visible is ‘good girl’ on the bottom left of the image, which could belong in the list of adjectives that conclude ‘Dear Sir’ – state child, half-caste, obedient, well-spoken, destitute, neglected (22).

‘State Lady Report’ (26-28) includes similarly conflicting descriptors of stolen children. Preceded by a quote from Ann Laura Stoler’s Tense and Tender Lies (2006) about the gendered and racialised ‘intimacies of the everyday’, ‘State Lady Report’ explores the all-pervasive nature of state control. (Note: each line is preceded by a box marked with an x to give a checklist impression.)

State Lady spills kitchen cupboard contents to the page and sniffs at the oven: I noticed an assortment of cakes and buns had been baked that morning. (26)

State lady inspects my house, body, hair – notes I am not causing trouble, and I am reasonably clean. (27)

All facets of life are under the jurisdiction of the state. An allegation of ‘consorting’ further drives home the kind of social and emotional deprivation employed by the state in achieving domination. The visual elements of this poem – the marked-off checklist, the typewriter-like font in bold to mark out the difference between the ‘I’ of the state lady and the ‘I’ of the narrator – visually repurpose the structures of regulation and control to tell a different story.

In his review of Archival Poetics, Nathan Sentance points out that the narrative of the archive relies on the suppression of Indigenous voices. He says, ‘This is not to say that we, First Nations people, are not in the archives…we were usually included in archives without our informed consent. Our histories, our cultures, and our people were recorded by those commonly involved in the attempted physical, cultural and spiritual genocide of our people: police officer, government officials, and anthropologists, for example.’ (Sentance, 2019). Archival Poetics is itself an archive, a re-recording of the physical, cultural and spiritual experiences of First Nations people, a repossession and reconfiguration of a history rent with trauma.

But again: is it history? At the time of writing this review, mass protests are taking place all across the world in the wake of the murder of George Floyd in US police custody. My social media landscape is one of outrage – as it should be – but this sentiment is aimed at American police, at American policy, at American people. The Guardian’s Deaths Inside tracks Indigenous deaths at the hands of police in this country, a number currently at 432 since the end of the commission into Aboriginal deaths in custody in 1991. In a devastating parallel, George Floyd echoed twenty six year old Dunghutti man David Dungay’s cries that he could not breathe while being restrained by police officers in November, 2015. And yet, there were no mass riots in Australia for Dungay, or for any of the First Nations people who have died or suffered abuse at the hands of police. So what are we doing about it?

Natalie Harkin’s poetry works to decolonise the archive in a way that is distressing, arresting and aesthetic, and tells us that we need to pick up the gauntlet, continue the work and be better. Be better at recognising and rejecting the racism and violence propagated in the spaces we live and work and in our media. Be better at dismantling the systems from which we have profited at the expense of First Nations people. Be better at amplifying Indigenous voices instead of our own. Be better at listening, instead of speaking. Wondering where to start? Get yourself a copy of Archival Poetics.

GABRIELA BOURKE is a doctoral candidate at the University of Sydney. Gabriela is most interested in fictional representations of animal and human trauma, and the ways in which these intersect. Her work appears in Hermes and Southerly.