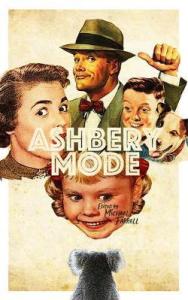 While the term ‘mode’ suggests something computerish, or mode as in moda, fashion, the poems in Ashbery Mode are less ‘coding’ or ‘trying on’ of style, more an absorption inside of a massive body of work. Ashbery’s poetry is a challenge for critics but great nourishment to poets. As the cover suggests, ‘we’ (koala) look up at these American heads, a cruel joke on the idea of Antipodes and perhaps a version of terra nullius from the American perspective. I am reminded of John Forbes’s ‘Antipodean Heads’, which starts: ‘I wish we could be nicer / like the Americans’, how we know so much of them, and keep looking up that way. In the ‘Antipodean Manifesto’ (1958) a group of Australian artists and the critic Bernard Shaw took a stance against abstract expressionism, the New American Painting exhibition, fearing its influence on local aesthetics. This collection, brought to life by editor Michael Farrell, indulges in North American influence, especially the charm of abstraction, freneticism and freedom of movement in poetry. Featuring poets who encountered John Ashbery and other international modernist poetry after 1958 let’s say, Ashbery Mode charts this epic influence in so called Australia. Just how nice are they ‘over there’? Ashbery Mode considers just how nice Australian poets can be, even and especially under the influence.

Chris Edwards’s poem ‘Rat Chow’ (cute product for a dystopian supermarket!), cannibalises Ashbery’s book length poem Flow Chart to give us a ‘Reconstitution’ of that book. What nutrients did the author ingest before expelling the flesh of Ashbery’s poem? From the difficult puddle surface hidden gems. ‘things keep arriving from the florist’s’ e.g. is typical of Ashbery’s ‘tone’ or ‘imagery’, and perhaps an easy metapoetic statement. The poem is like flower painting, as in decorative; the ‘Ashbery Mode’ draws so much of its value from being an attractive, baroque, shifty surface from which emerges a strange country. These ‘things’ (e.g. ”You’re a grown man now, but must sit in a tub, on a comfortable income and a few puddles of camel-stale, jotting down seemingly unrelated random characteristics.” a quote from the blue and quite a ‘thing’) are good for merely existing, delicious, and being cannibalised into the poem. As Brazilian poet Oswalde de Andrade claim in his Cannibalist Manifesto (1928): ‘Cannibalism alone unites us’. Ashbery’s is poetry that makes you hungry, and poets unite in this collection around this act. To the question of nutrients… is this Mode lifegiving? Yes, through decadence, which Edwards and many others collected here enjoy, like soft cheese.

David Prater’s poem ‘Ninety Nine Rabbits’ hilariously remarks ‘I like John Ashbery’s fingernails’, the dead excess of the poet’s presence (in Aus). Prater’s poem tracks the influence of Ashbery on Stephen Malkmus (of the band Pavement), whose first album Slanted and Enchanted, made him ‘throw up’. What a thrill! (I wonder what Ashbery Mode might sound like anthologised on vinyl…) There is a lot of eating and drinking in this book, which feels like a metaphor for influence’s effect. Stuart Cooke ‘lick[s] the ash / of brie’ on the porch while Oscar Schwartz’s uncomfortably Australian poem ‘Wine’ drinks deep: ‘This is the wine from ripe red land […] This wine is sacred beer. / And it is to be served in jugs’ (‘ripe’—eek!). Poets unite here in the ritual consumption.

I am often made to think of Ashbery when reading Gig Ryan (and vice versa). Her poem, ‘Epitome Of Variation’ (from Heroic Money (2001)), is ‘very Ashbery’, but also ‘very Gig Ryan’: ‘The swift barman’s cellophane gloss / glides beyond me / explosive celebrant, stoned croupier / in crushed Adelaide.’ Ryan’s poem is engaged in a struggle for something new (for Adelaide, for Australia), a tough and brutal way of building a scene, melancholic (‘Dwindled day’) and a bit dreamy (‘beige sunset’) always full of jarring turns. Great, influential Australian poetry that takes from Ashbery’s density, flightiness and obscurity.

Bella Li’s prose poem ‘Just Then’, concerns itself with how the local blends with the foreign: ‘Ah California! I’d give my arm leg for a shovel and a fat wheelbarrow.’ It’s a funny poem, a scene in which the speaker waits lakeside for a goose to show up. It mock-begs for Imagist clarity, taking pleasure in the flow of linguistic noise that busts Imagism up. Language runs along hectically, ‘juicy oranges getting juicier’…’fuzzy marmots […] but no goose’. The objective is less goose-hunt than the margins of that. Travelling up to North America, Li’s short poem apostrophises American locations (and rodents) for their importance (and cuteness), but also demonstrates the importance of moving on, losing focus. Something like New York might exist here too, wouldn’t that be cool, and it does, it’s poetry, like ‘chintz in the wild’ that decorates Li’s expanding, expansive view.

The epigraph to Tim Grey’s poem ‘6, From Bio’ regards the influence Ashbery wore on his sleeve: ‘absolute modernity was for him the acknowledging of the simultaneity of all life, the condition that nourishes poetry at every second. The self is obsolete‘ (Ashbery on Rimbaud in his translation of Illuminations). Ashbery’s connection to Rimbaud, whose modernity was perhaps to Ashbery as Ashbery’s is to Li, Ryan, Grey, etc.– is concerned with nourishment for poetry. Grey’s poem is busy, violent, a flipside to Li’s joyous play: ‘taxi ploughing into his bicycle in the box-smoked dusk’ shows off modernity’s simultaneity in a different way.

Louise Crisp’s two comparatively chilled out poems of modernity also pinch from an Ashbery line for their epigraph, from Some Trees: ‘The river slides under our dreams / but land flows more silently’. In ‘Ground’ a man ‘hoes vegetables’ and, digging, finds ‘another layer of ground / under the colour of vegetables / patterned in the shape of his country’. This sombre poem digs with Ashberyan tools, unravelling modernity’s papering over of Aboriginal land.

It strikes me that John Ashbery received a National Humanities Medal from President Obama in 2011. (Who are ‘our’ equivalent poets? What poetry do our Prime Ministers read and reward outside maybe Les Murray? And when is Michael Farrell gonna get a medal?!) Despite it’s naughty experimentalism, hermeticism and lyric obscurity, one of the curious things about Ashbery’s poetry (at least as it can be / has been in places critically received) is that it ‘stays out of it’ when it comes to politics, or protest. (We might remember that Abstract Expressionism in Jackson Pollock was supported by the CIA). While it would be foolish to pursue this binary too hard, it’s interesting how politics shows up in Ashbery Mode to reflect on Ashbery’s legacy.

Fiona Hile’s ‘Consumption’ is a hot little almost-sonnet that takes on the Capitalist pig. The speaker complains ‘if you say you don’t believe in that thing / about money and desire I’ll just die– […] But that’s okay, I hate work, and, anyway…’ In a tone evoking too the charm of Frank O’Hara, ‘Consumption’s’ lyric investigation of death and legacy ends on the joke that at least of the body ‘Nothing will be wasted’. Full of jokes, like the speaker’s ‘father’s / puns’, the poem combusts in a mess, abandoning the ‘ticklish’ world of novelty the poem is disgusted by. Language under consumer capitalism (‘double absolute modernity’?) will make you sick– luckily we have poetry to help with that. (Help to purge?). Does Hile’s poem diss the baroque novelty of Ashbery’s abstraction, the pursuit of a higher poetic good ‘outside capital’? I’m not sure.

Pam Brown works from Ashbery’s ‘political poem’ ‘Default Mode’, which Brown heard him read in New York in 2008. ‘Antipodean Default Mode’ mirrors the refrain “They were living in America”, inserting ‘Australia’ and animating points from the original, like ‘…living in America fictitiously’. Brown: ‘everything had seen better days / They were living in Australia / just for the heck of it […] like true blue Americans’. The poem absorbs the twin fictions of America and Australia and spits out a flatter version still. Nationhood for settlers is rendered spurious, and the fruits of colonial violence and modernity, like ‘biodegradeable mousepads’, fill out this sad, cutting and funny poem.

Farrell notes in his Introduction that the poets included ‘span roughly fifty years’. I’m left wondering what a part two of this collection might look like– another fifty years of influence in the rapidly heating Antipodes should produce some fresh takes on this monolith of modern poetry. The poems vary greatly, but in many there is a sense of poetry in breakdown, a reflection on the passing of a great poet and a changing world. Luke Beesley’s ‘Timber Hitch’ is a short, crumbly prose block below which a scrappy drawing of Ashbery, and the caption ASH. A phoenix… or ashes to dust…

In any case, with a nod to ‘what’s next’, Ali Alizadeh begins ‘The Poet (After ‘the Painter’)’: ‘Crouching between horror and language / I hate writing about this damn world,’ and concludes his polemical response: ‘The age doesn’t demand an image of the world / in any language. Better to tattoo fear / on the page, in a dark inaesthetic poem.’ Alizadeh’s mad sestina is a fine, if random place to stop eating of these poems, and to look forward to ever newer versions of the Mode. Dark, inaesthetic, cruel… tho probably in equal measure desperate attempts to delight oneself and others.

GARETH MORGAN is a poet and co director of sick leave reading series and journal. His work can be found in Rabbit, Cordite, Australian Poetry Journal and other places.