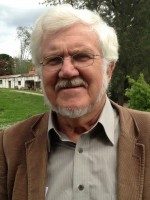 Geoff Page’s 1953 (UQP) was shortlisted for the 2014 Prime Minister’s Literary Award for poetry. He lives in Canberra and has published 21 poetry collections, as well as novels, memoir and biography. He edited The Best Australian Poems 2014 and 2015 (Black Inc.)

The Back-off
for two good friends

Forty years or so ago
the same straight back of conscience had them
fleeing the police.

The war was wrong. They wouldn’t go
though both had army fathers.
One torched his card in public;

the other did a week in Goulburn
before the draft was dumped.
Today, here in our group of five,

they’re meeting over coffee,
one, flat white, the other, black,
one still fresh from picketing

some notably obnoxious mine,
the other fired with new results
disproving warmist claims

from vaticans of scientists who
will brook no heretics.
Each man is well aware the other

knows his slant on carbon.
Their temperaments are of a kind.
One starts to talk about the forest

his open-cut will tear away.
The other counters ‘Well, you know’
but finds he’s trailing off.

They share a slow, reluctant smile;
we’re all too old for this.
Minds at our age don’t shift much.

They both look round to check the weather:
two of them and three of us.
The argument they’d planned to stage

would probably have proved uncivil.
Seamlessly, without intent,
we move to something different.