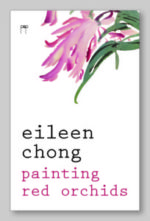 Painting Red Orchids is Eileen Chong’s third collection in six years. Born in Singapore, she has lived in Sydney since 2007. Although her Chinese roots run deep she is also very much a citizen of her adopted city and country.

The influence of classical Chinese poetry, from various periods is strong, both in Chong’s tone and, to a lesser extent, in her content —  or so it would appear to this reviewer, judging from translations he has read over the years. Chong works with an awareness of this tradition but her particular achievement is the way she is able to be faithful to the specifics of the eras involved and yet still sound contemporary and universally relevant. There is nothing archaic here.

A fine example of all this skill occurs in Chong’s four-part poem, “Magnolia”, a monologue from the viewpoint of Hua Mu Lan who dressed as a man to take her father’s place in the emperor’s army and rose to the rank of general during the Northern Wei dynasty (386 – 536 AD). A stanza in the first part, dealing with the need to hide her menstruation, is particularly graphic: “I carry a skin of water and squat in the grasses. / Now it it safe to loosen my robes. Carefully, I clean myself. / Even in the dark, my hands are sticky with blood.” The link between this blood and the blood soon to be shed in battle is more than a little poignant.

In the second part of the sequence, Mu Lan describes her first kill, a chicken back in her childhood: “I carried her to the back of the hut, her heartbeat / pulsing in my palm. Her feathers so alive against my skin.” In the third section, Mu Lan defines her role explicitly: “Not for me the embroidered magnolias of marriage; / I give birth to nothing but blades, arrows and death.”

It is believed that, after twelve years of warfare, Mu Lan returned to her village. The poem’s last stanza reveals an interesting ambivalence: “If I were a hawk I would take off, wing towards / the west and the setting sun. I would hunt only / to survive, I would feather a nest, I would fly.” There’s a nice balance here, and throughout the poem, a rejoicing in the exploits of a notable proto-feminist and a clear sense of what she had to give up in order to achieve them.

A different, but no less convincing, Chinese element in Chong’s poetry appears in her poems about Chinese cuisine — its preparation, cooking and consumption. In poems such as “Cooking for One”,  “Xiao Long Bao (Little Dragon Dumplings)” and “Sun Ming Restaurant, Parramatta”, among others, there is clearly a relish for tastily-cooked flesh that might well make a vegan curl back in disgust. Parts of these poems, as in  “Xiao Long Bao (Little Dragon Dumplings)”, for instance, can also read like a (well-written) recipe: “Finely shredded young ginger topped / with black rice vinegar and a dash of soy / form the dipping source.”  At the end of her  dumpling poem the poet talks about the acute gastronomical response of her non-Chinese lover to what he has just eaten:  “I still remember the look on your face when you ate / your first little dragon dumpling. Sudden understanding.”

“Sudden understanding” is not, however, a resolution that conveniently arrives through another important strand in Painting Red Orchids, i.e. Chong’s poems about a break-up with one long-time lover and the beginnings of a new relationship. These poems are arranged in a cluster but also recur through the book. At the end of “Adrift”, for instance, the poet talks of how “The mussel man / clutched the paper-wrapped package / to his chest and said, Bless you, lady. / I need all the blessings I can get — / I am adrift, far from rock and shore.” In “Taboo”, shortly afterwards, she reflects: “How much did I want? / All the years, and none. // Your foot on my calf, / heavy in the dark. // Your breathing laboured, / my heart  withdrawn.”

Some sort of explanation is offered in “Split Moon”: “I said the word and broke us — / but chiselling away at our foundation / were years of the unsaid; of silences / drawn out and covered over. // Did I do it right? I do not know. / The moon does not speak. / We have divided the whole, / we are left with less than our halves.”

Poems of this kind, with slightly laborious images like “chiselling away at our foundations”, speak to an almost universal experience but are often difficult to bring off aesthetically. Almost all poets write them at one stage or another (and they can often be effective therapeutically). It doesn’t seem fair that they are not always among the poet’s best work. The injunction that the subject of Chong’s “break-up” poems calls for in “Last Leaf”is instructive. Her female narrator starts by saying: “I’d said yes / You then said no poems / A poem falls: / the last leaf of the season.” It’s possible hurt pride or her ex-partner’s need for privacy were not his only reasons for saying “no poems”.

Some of the most memorable poems in Painting Red Orchids occur when Chong’s Chinese materials or vantage points are seamlessly integrated with something more western, sometimes with a deal of surrealism thrown in. The last six lines of “Dream Fish” are a good example of what is most characteristic about this eloquent,  engaging and continually-developing poet: “We only kissed at the end, the moon watching / the old scene play out.  Mosquitoes and two people / discovering how to taste each other. In the bedroom / bright with lamps, roses shed their petals in half-arcs // around the vase. Pollen dust and the taste of musk. / You released the fish — its escape: a rapid beating of drums.”

GEOFF PAGE is a Canberra based poet and critic. He edited Best Australian Poems 2015 and his latest collection is Plevna, a verse biography, (UWA).