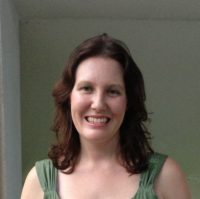 Raelee Chapman grew up in Albury-Wodonga. Since 2011, she has lived in Singapore with her family. Her fiction and narrative non-fiction has been published in Australia and overseas in places such as Southerly, Lip Magazine & Expat Living among others. She is currently compiling an anthology of short stories set in Singapore for Monsoon Books.

It’s a tar thick night. A cool mist licks at her heels. He can no longer touch her skin now that she is hiding. She knows he is looking for her in the swirling mist. This is how girls vanish. She treads light as a marsupial over the rotting leaves. He fumbles and lugs, heavy through the bush. The bats watch, their eyes pinned on him like a hundred needles casting a voodoo spell. There is a full moon, a fat halo of light leading her. The air tastes sweet as she leaves Big Man’s scent of tobacco leaf and three day post-shower stench behind. No longer will she sleep pressed into his sweaty armpits listening to his enlarged heart’s odd beats. Soon she’ll no longer hear him flailing behind her.

At night-time she has trained one ear, the ear not pressed against him, for the distant, syncopating hum of a highway. She doesn’t remember the road or the way to it, when she came here, her eyes were closed. She can hear him swearing, grunting, stopping to pant, holding onto paper-bark trees, sheaving their Bible-page thin peelings. His bare feet are nicked by bindi-eyes and scratched by low scrub. For there was no time to put on boots. “Bathroom,” she’d whispered and slung off his heavy arm. She stepped out of bed and crouched by their bottom drawer and paused her hands resting on its contents for only a moment. Summoning her strength. Big Man let her use the flush toilet these days, instead of the chamber pot by the bed. He was more relaxed since she’d given birth to their son.

She moves on, stealth in the night towards the white noise of the highway and leaves behind all that was familiar to her for the last six years. The lonely wooden farm house with tannin-stained windows and gap-tooth steps. She had tripped many times on those steps. An ideal haunt, so well hidden in thick bush if you didn’t know it was there, you would never find it. There is one road in and one road out. She avoids that road.

She passes the pile of ashes where they sometimes lit a fire. Where onetime a black fella arrived unannounced with a dead kangaroo over his shoulder. Road kill. They accepted his invitation to cook and share the meat. The visitor never spoke, he saw her with the lead-rope looped around her waist connected to Big Man’s belt and said nothing. The black fella slept by the fire that night on a dirt mattress he made with his hands and was gone the next morning.

Her soles kick up and scatter ashes through the archway Big Man made with scraggly sticks. Where they married, wattle wreath in her hair, its sunny pollen dusting her nose and cheeks. “My golden girl,” he had called her. There were no witnesses, perhaps not a proper marriage. Big Man said the rites or made them up. It was the first time he let her off the lead rope tied around her waist since the day she arrived. She was fourteen, he was forty-one.

In the bush she finds clothes, dotted in trees, lifted by the wind years ago from their simple rope clothesline. These clothes made a run for it before she did. How often she’d wished the wind could carry her. In a copse she recognizes what Big Man called the birthing tree, where her son was born in the dirt. Big Man had wrapped him in a flannelette shirt and squeezed her breasts to show her there was milk. The baby softened Big Man. How often he holds their son aloft, a naked pudding baby, a trophy, both of them cooing. He could no longer restrain her so closely now that their son needed constant attention, feeding, bathing, changing. He was more trusting. But when Big Man went out, he locked her in a windowless back room without a fan because once before their son was born he found her with an electrical cord around her neck.

When her son tumbled forth from her womb, a new and instant love came with it, saving her. He is what gave her strength and makes her push on. Her son is the only light in that dirty house. A house she could never get clean, that has decades of filth and grime entrenched in every grain of wood, every porous surface, rusty tap and sink. Mice and cockroaches scuttle across the floorboards and her son loves to watch them wide-eyed and clap his clumsy hands.

A branch snaps and she hears him stop dead in his tracks. She can hear it too, the boy’s wailing. It has taken on a more desperate pitch as though he can sense what is happening. He is tucked in his little bed made from a deep, empty chest drawer, nestled in old clothes. She knows now Big Man won’t follow. This is the only way. Her only chance. If she takes the boy, he will hunt her down, never let her go. She will come back to claim her son. Someday Big Man will be locked up. She wonders who will hold his lead rope. She will swoop up her dirt-stained son and wipe him clean of Big Man, of this place.

She hears him turn back, his soles slap crashing back to their son. She follows the moon’s spotlight. She is robed in her ivory shroud. When Big Man looks up, seeking light for his path, all he sees is sky as dark as a tar canvas.