Gun in the Garden by Alice Melike Ülgezer 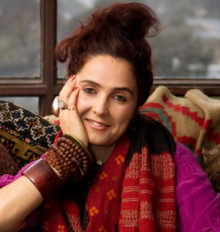 Alice Melike Ülgezer is an Australian/Turkish writer. She draws creatively on her mixed cultural heritage. Her first novel The Memory of Salt was published by Giramondo in 2012. Her work has been published in Meanjin, New Internationalist, One World Two, PEN Quarterly, The Review of Australian Fiction, Cordite, Etchings, HEAT, Mozzie, Taralla, Going Down Swinging & Kalimat.

Gun in the Garden

The sky was bruised with autumn. A brusque wind scored as the pigeons whistle-dart and fluted above. The neighbour, a Syrian refugee, had brought them with him across the border when he’d fled. And they cartwheeled now, dipping, diving and gliding, smears of grey, mauve and silver across the mottled Anatolian sky.

Ayșe leant on her hoe a moment where she was working in the garden next door to peer up at the birds when she heard the banging at the door. The street dogs had taken to living in her yard that winter and the barren earth was a mess of coal dust, vegetable scraps and dog shit. She’d found a hoe in the coal store and was trying steadily to clear the yard. But there was that banging on the door again. It startled her as no one knocked like that save for the police or the Jendarma and then only if they wanted someone or something. So she chose to ignore it and hoped that whoever it was would go away. What could she possibly need to know about the world outside anyway? They would tire of knocking and leave and she would continue hoeing the garden and by dinnertime she would have forgotten all about it and the garden would be restored to its tidy, serene state. And if it was something important perhaps, the news would make its way to her husband and she would find out from him when he came home.

But a little voice called as the knocking came thundering again, “Mamma.” She rolled her eyes, her heartbeat slowing all of a sudden with relief.

“Silah, silah,” the older boy exclaimed. “Gun Gun. Our gun is in your garden!”

“Your what!?” she tried to push the door closed against their little heaving bodies. But the littlest one Husam was stuck trying to crawl between her legs. The middle of the three, a little girl, stood by smirking like a dangerous cat.

Ayșe spat to the side and began to recite the Sura of the Dawn. She knew it was wrong but she didn’t like these children. If she gave to one surely that meant she had to give to all. And she couldn’t possibly do that. Besides, she didn’t like the way they threw stones at the local dogs or hung puppies out of windows from pieces of packing tape tied round their necks or the way they shrieked and sniggered and reprimanded her for eating bread during Ramazan.

“Our gun is in your garden Mamma,” Husam was clawing at her thigh. His head peered jerkily out from between her knees at the garden, his shoulders yet to break through.

“We just want to go and look for it,” enjoined the older boy who was more mature and friendly than the other two and by smiling seemed to apologise for their behaviour. The little girl studied Ayșe’s face as she swung her hips back and forth with one finger planted firmly in her nose, simpering softly. Husam tried to burrow further between her knees but this time she gave a strong shove.

“I will have a look,” she said sharply and gathering all her strength, heaved the child out from between her legs and slammed the door, sliding the wooden bolt across to lock it.

Turning back to the garden she glanced quickly at the freshly turned earth. “Those children,” she said aloud “and their fucking guns, telling me I am haram. I’ll show them haram.”

But before she knew it the three of them were scrambling though the grapevine over the back wall.

“Mamma, Mamma!” yelped Husam as he fell into the dirt and dog shit. The little girl slid slyly under the plastic matting that Ayșe and her husband had secured against the wall for privacy and the bigger boy leapt over the stones. Together they tore across the garden under the bare autumn trees looking for their gun.

“I told you I would look for it you little pimps!” she shrieked.

And just then the bigger one picked up a piece of wood that had been nailed crudely with another small bit for a trigger and tied with a piece of string. Utterly unaffected by her cursing, he smiled triumphantly, “This is our gun! This is our gun!” And with that he slung it over his shoulder and began shooting imaginary rounds of machine gun fire round the garden, laughing and shouting, Allahu Akbar! The little girl and Husam both jumped wildly around in the dirt shrieking their pleasure.

Ayșe stood on in horrified silence. If those bullets were real she would most certainly be dead. She shuddered in a sort of shocked confusion a moment before gathering her senses and shouting. “Get out of here you sons of donkeys! Get out of my garden!” Her limbs suddenly coursing with adrenalin she lunged at them with the garden hoe as they leapt jubilantly over the vegetable scraps and coal dust. The little girl managed to dart across to the wooden door and slide the bolt open. The other two scrambled after her and with a bang-clash and clamour of the bell they tore onto the street shrieking and firing as they went.

Ayșe threw the hoe down on the concrete and rushed at the door to bolt it again in case they should return. With trembling hands she slid it across once more and feeling utterly humiliated, yet out of view of the garden wall, sank against the door and wept for the children she would never have.