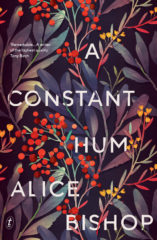 Just a blur through bushfire glow, on Alice Bishop’s A Constant Hum

In the acknowledgements that append her short story collection, A Constant Hum, Alice Bishop states that her book is intended to keep ‘in mind’ the people who died in Black Saturday (199). Though Bishop lost a house in those fires, she says she cannot imagine ‘how it would really feel’ to have lost family, friends, or a partner (199). Her writing, however, derives from a genuine attempt to comprehend these experiences—and results in a book that acts as a memorial for the dead, as a tribute to the survivors, and as a means for others to engage in the motivated and directed acts of imagination that constitute empathy.

The collection is divided into three parts: Prevailing; Southerly; Northerly. In the first part, we meet survivors years after the fire, and see how their losses and traumas ‘prevail’ as the world around them moves on. The next two parts move back in time—slowly encroaching upon the fire itself—ending with the stories of people who have just escaped it. This clever structure helps maintain narrative tension (by progressing the stories towards a ‘big event’) whilst also—and more importantly—foregrounding the stories of ‘aftermath’ which are easily forgotten by outsiders and which only begin with the fire’s extinguishment.

The collection attempts to concretise the abstraction of ‘Black Saturday’ by glimpsing into the lives of many characters: naïve-but-observant children; slangy old bushies; working class folk; aspirational suburbanites; people whose romantic relationships have perished in the flames; survivors seeking justice in the courts; health care workers who treat the wounded, and elderly people who are already well-used to ‘losing old friends’ (155). We also hear the insensitive and coercive voice of the voyeuristic, predatory media: ‘What did you find in the ashes?… For our audience, now, what would you take with you—if you got another chance?’ (187). The book thus reads less as a short story collection than as a polyphonic chorus—one that effectively evokes what was (and remains) both a profoundly communal and individual experience of trauma.

The book’s many tiny vignettes reinforce this choral effect, especially those which speak from an ambiguous point of view:

‘We were comforted… that things ended for them together, holding each other under betadine- and copper-coloured smoke… they found them in clusters, mostly—silvers, gunmetal greys and blacks so petrol-pretty you’d think of a currawong’s wing, of a bush-pigeon’s neck, rainbow-flecked.’ (119)

This excerpt shows how the bush is itself a voice that sings in this book, further unifying the characters’ diverse stories in how it shapes imagery and metaphor, and in its provision of a shared setting. All the characters see, hear, remember, pine for—and fear—the bush and its ‘scary hum’ (27), a world where currawongs, rosellas, cicadas, bogong moths, lorikeets, choughs, fairy wrens, kangaroos, wedgetail eagles, and boobook owls live alongside humans in the lush beauty of eucalypts, wattles, charcoal trees, tea-trees, and paperbarks.

Bishop’s writing is enlivened by her ear for dialogue and eye for salient details. We recognise people by their distinct vernaculars and by the cars they drive, the kinds of homes they live in, the brands they wear, the foods they eat, and the places they work. We recognise country women with ‘splitting… bleach-brittle’ hair and foundation ‘caked-on’ like ‘clay’ (174, 8, 104). These women are different to the ‘City Girls’ who ‘don’t wear as much make up’ and ‘keep the hair under their arms’ (51). Such details make Bishop’s fictional world vivid, whilst evoking what the fires themselves emphasised—namely, the divisions that both define and undermine our so-called Australian ‘community’: rural vs suburban vs urban; working class vs professional class; educated vs uneducated; men vs women (etc.). The story ‘Half-light’ shows the savage indifference—and/or sheer blindness—that can result from such differences: ‘mostly unworried’ wealthy urbanites enjoy a wedding under a ‘billow of smoke’ that has ‘blocked out the sun’ (165). What do they care if the homes of the people who serve them are being razed to the ground?

Survivors must also learn to navigate the new—and unique—psychological and social terrain left in the wake of the fire. Some characters can no longer identify the divide between the real and unreal, as in the unsettling story ‘Follower,’ where a young man stalks what might be an actual woman or the ghost of a dead lover (she has eyes of ‘smoke and cinders,’ 60). Other characters become ‘unfamiliar’ (35) to themselves. Their self-detachment is only reinforced by the externally imposed label of ‘survivor’ which marks them as isolated outcasts: Rose prickles at the ‘pity’ (35) of her neighbours, whilst a school boy is shackled to his trauma by his new nickname, ‘bushfire kid’ (117). In another story, a man who is overwhelmed by the economic disaster of his rebuild, can only repeat: ‘Guess I can’t complain’ (128). This refrain expresses the guilt and resentment of survivors who are forced to re-evaluate their lives according to the new hierarchy of pain and loss that has been established by the fire—one which no-one else in society has to submit to, and one which easily trivialises their ongoing hardships via relativism. Such characters are trapped in the divide between the past and future: they are alive, but unable to live.

Some readers might find this book’s relentless ‘flick book of images’ (159)—and its catalogue of sensory horrors—sickening and intolerable. No one wants to see or smell people and animals reduced to ash and teeth—or morphed into ‘blackened statues’ (79). No one wants to contemplate the impossible fact of ‘liquid, silver rivers running over warped tin’ (129)—or comprehend the suffering declared by burnt out cars whose doors remain outflung. However, Bishop’s job is to make us feel what the survivors feel: ‘two kind of sads mixed together,’ one ‘dark’ and the other ‘panicky’ (50). Her job is to make us acknowledge, and at least try to understand, the experiences of those who died, as well as the experiences of the living who are doomed to compulsively think about ‘the burnt things—the forgotten things—all the time’ (109).

The collection is not, however, one of pure despair and horror. Numerous characters manage to ‘feel a little hope for the future’ (76), including women whom the fire liberates from dangerous and demeaning relationships. The final story, ‘Burning the House,’ epitomises how sadness and hope coexist in the collection. This lyrical, poignant story reads like a love song dedicated to both a family home and a first love:

‘This house will burn soon, bushfire blue… So sit, right here with me, years ago and before it all goes… Be with me, quietly, before the fire comes and you start to look at me like you’re watching the news’ (196-197).

Despite everything, this narrator finds a painful but empowering wisdom in the rubble: ‘We know, now, that things can go’ (197).

As one voice in the collection reflects: ‘there are no set rules on offerings for the disappeared’ (33). A Constant Hum is as sensitive, sincere, and compassionate an offering to the dead and the scarred as anyone could hope for. It is a skilfully written, complex and sophisticated attempt to truly imagine the unimaginable totality of loss and suffering that Black Saturday represents.

H.C.GILDFIND (hcgildfind.com/@ltercation) is the author of The Worry Front (Margaret River Press). Her prize-winning novella, Born Sleeping, will be published by Miami University Press in 2021.