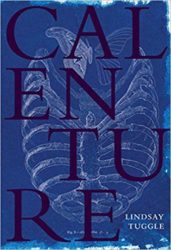 The striking title of Lindsay Tuggle’s poetry collection is immediately defined in her preface:

A fever incident to sailors within the tropics, characterised by delirium in which the patient fancies the sea to be green fields, and desires to leap into it. (ix)

This title, Tuggle’s preface, the book’s dedication to her dead sister, Kate Middleton’s introduction, and the notes that complete the text, provide an intriguing and welcome frame through which readers can ‘leap into’ Tuggle’s darkly beautiful worded-world.

Tuggle’s preface notes that: ‘Every elegy needs an author. And then, an autopsy’ (ix). The themes and impulses shaping her book are thus clear, and she describes her collection as an:

ossuary to a constellation of deaths, some sudden, all strange. It is also a catalogue of medical and mercurial oddities, curiosities that call forth the exquisite corpse hard at work beneath our living flesh. The echolalic duet between what is lost and what is left behind. The phantom limb. The wandering womb. The book bound in skin. The face that ghosts itself. The fever dream that ends in drowning. (ix)

Tuggle clearly loves language that is ‘diagnostic, archaic, hysteric, mesmeric’ (ix). She writes knowing that the ‘management of thresholds / is perilous business’ (49), and her collection thus maps the obscure imaginative landscape that joins the living to the dead, the personal to the universal, and the abstract to the concrete.

Tuggle’s collection is divided into two suites. The first shares the title of the book, and is introduced by three eerie quotes, including ‘We need a dead woman to begin’ (Hélène Cixous), and ‘One need not be a chamber to be haunted’ (Emily Dickenson). In this suite, we meet a woman who cannot live ‘within her limbs’: she feels ‘on fire’ and ‘cut to pieces’ (34). We meet another woman (the same woman?) who ‘wakes to remember / her garnet cluster of early deaths’ (9). We glimpse ‘wrists / graced in the master’s hand’ (8), ‘mouthfuls of gravel’ (41), ‘bruised’ and ‘bandaged’ tongues (3, 5), and ‘feral anorexics’ (5)—including ‘the concave half of a sister’ (5).

This reference to ‘a’ sister shows how it is never quite clear who the subject and object of these poems are. This ambiguity is elaborated by the poems themselves: ‘Some days her face obliterates my own’ (15), and ‘we wear / each other’s faces’ (4), and ‘I trespass her name as my own’ (25). Of course the reader assumes, as they’ve been directed to, that such phrases refer to an actual ‘sister,’ and Tuggle’s ambivalence towards this relational identity is expressed when she refers to the ‘ambiguous wound’ (19) of her loss, to the ‘old grievances’ (‘shame’ and ‘blame’) that riddle such relationships (20, 21), and to the archetypal sibling emotion of jealousy—expressed when she looks upon a female corpse and wonders: ‘do I covet her still / diluted by sleep.’ (5) The narrator chillingly concludes: ‘I love the dead more than you / always will’ (6). Tuggle’s ambivalence towards the ‘biological gift’ (21) of a sister can also be read from the poems’ most common structural constraint of couplets—two lines, coerced into a relationship, across time and space.

More ambiguity is built into this first suite by reference to other deaths, including that of a man who lay ‘lay unfound’ for days (27), and the ‘integral burial’ of a flooded town where the ‘measure of loss’ lies in the ‘submergence of trees’ (31):

in the vanishing tendency
of the object

where descent
is watery and burns.

This deadly flooding is mirrored in a later poem, when a woman ‘walks in blindfolds’ into ‘bitumen tributaries,’ where ‘drowning ends in a glassy sprawl’ and roadside altars whisper ‘fire soars’ (41). As above, such vivid and violent references to suicide, death, drowning, burning, basalt and glass are often juxtaposed against the ostensibly trivial notion of ‘prettiness.’ Is drowning ‘a pretty way to die’ (19)? The ‘pretty suicide guide,’ would say so: ‘beauties never harm their faces’ (27). Of course, there’s nothing benign about the value of feminine beauty. This is made clear when the narrator looks upon a female corpse and thinks: ‘she’s prettier now / in coffined silhouette’ (5). Isn’t this the ideal woman? Pretty—and inert, silent, and surrendered to others’ devouring gaze? The narrator defies this value system: the female which dazzles (3) her gaze is a ‘raving’ (39), ‘ungroomed and carnivorous’ (3) ‘slattern’ (41).

The second suite of poems responds to the work of anatomist and naturalist Joseph Leidy (1832-1891), and the poet and naturalist Arsène Houssaye. Both men shared a bibliophilic ‘fetish’ for ‘anthropodermic’ books—that is, books bound in human skin. These books were normally created by surgeons, with Houssaye’s own book of essays bound in skin sourced from the ‘unclaimed’ body of a French, female mental patient (63,64).

The woman (women?) alluded to in this second suite call out to the women-sisters of the first—relating the latter’s more personal specificity to the more universal history of ‘the diasporic womb’ (56). In the first suite, the very ambiguity of the poems’ subject-object allows them to enlarge on their own anyway, especially in the poems referring to medicine and asylums, like in ‘Asylum, Pageantry’ (‘it is best not to dream for long / here medicine disallows her florid stutter,’ 3), and ‘The Heretics’ Asylum’:

The physician knows nothing
of angels with proper names.
Reverence is permitted only
toward unseen patients,
an innate distrust of that
which can be embodied
in a creed. (24)

In the second suite, we enter a world where a woman is literally disembodied—torn from her skin:

A splayed book attracts all the gazes.
You are the title closeted gazelle.

To best display her character

no other decoration is placed. This
book deserves its own human cover. (53)

Sickened, furious—and utterly entranced—the reader asks: what does the woman deserve? This ‘brutal homage’ (54)? Here, the woman becomes another version of the inert ‘pretty’ female corpse in the first suite—one which others can literally ‘open’ and inscribe their own ‘creed’ into. This ‘echolalic duet’ between the first and second suites thus evokes the notion of an everywoman—an anywoman—who literally fights-to-the-death against patriarchy’s reduction of her to ‘flesh / toying architecturally with bone’ (56).

‘The meaning of fiction is not abstract meaning but experienced meaning… A story that is any good can’t be reduced, it can only be expanded. A story is good when you continue to see more and more in it, and when it continues to escape you. In fiction two and two is always more than four.’

In Calenture, two sisters are absolutely more than the sum of their parts, and the sophistication of Tuggle’s tightly crafted, cryptic and compelling ossuary—her home for the bones of the dead—becomes evident with each reading. Like the best poetry, this book is first and foremost an experience—one which no analysis can do justice to.

H.C. GILDFIND (hcgildfind.com) is the author of The Worry Front, published by Margaret River Press.