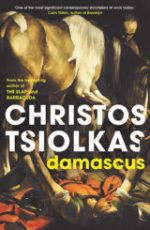 Damascus seems to be a departure for Christos Tsiolkas. The previous novels of the celebrated Melbourne writer mostly inhabit contemporary Australia and Europe. But that being said, Damascus, as the title suggests, travels back to the life of Saul of Tarsus, or Paul the Apostle, a wrathful persecutor of Christ’s early disciples in Jerusalem who was visited by a vision of Jesus on the road to Damascus. He seems to be playing a different tune from the modern day thematics of, say, Barracuda, his last novel-length offering, which was published in 2013 and told the story of Daniel Kelly, an Ian Thorpe-tier swimmer who crumbled under the immense pressure of national pride, a book that, on the surface, bore all the scars of a potboiler. Indeed I had felt reservations about the book until I read Julieanne Lamond’s essay “The Australian Face: Barracuda by Christos Tsiolkas” in Sydney Review of Books. In the review, a mostly positive, although equally measured by its long-form documentation of the complexities and shortcomings of Tsiolkas’s style, claimed that he is an

intelligent writer operating in a literary space which is, in one sense, the holy grail for novelists: he writes good books that also sell. In another sense, he has abrogated the role of the capital-L Literary writer to dance with the dreaded middlebrow.

Yet again, the trenches are drawn between literariness and the ‘dreaded middlebrow’. For me, however, this debate has a short half-life; very soon it begins to feel more like monkeys throwing poo at one another than serious, meaningful debate. But this interpretation is, as I mentioned earlier, only on the surface. If you look a little closer, Barracuda is arguably the finest example of Tsiolkas’s ability as a writer to seemingly effortlessly transgress those fluid boundaries between “literary/important” and “readable/entertaining” fiction. The split between ‘serious’ and ‘entertaining’ fiction is merely a placeholder, a crude representation of certain prejudices that many readers continue to contest and debunk. I, too, treat any kind of literary hierarchy with grave scepticism. Tsiolkas’s work is a perfect example. He has always managed to elude neat classification. His novels are literary, yes, full of complex and oftentimes controversial ideas, but also highly readable, never drawing attention to their own cleverness.

Dr Lamond, however, praises Tsiolkas’s ability to be an unaffected provocateur.

His provocations are deliberate and important. He provokes to bring things that are cast out of the national discussion back into the discussion: class, racism, drugs, desire.

Seen through this lens, Damascus appears less provocative than his earlier work. His enfant terrible status, initially bestowed with his first book, Loaded, which depicted a gay Greek Australian adolescent high on free drugs and hooking-up with self-hating homosexuals, seemed left behind, exchanged by a novelist who wanted to confront broader social and cultural problems. Maybe the terrifyingly candid child had grown up, exchanging shock and squalor for mature, wide-appealing topics.

It is also more universal—perhaps, global—than the strict Australianness of his previous novels, even Dead Europe. Damascus depicts all the signatures of Tsiolkas’s work—grotesqueness and obscenity, characters grappling with their own sense of shame, the pull of opposing ideological forces, and an underlying element of satyrical hedonism—but places them in an historical arena that resonates globally, as the epicentre of Christianity’s development into the world’s overarching system of belief. He achieves this by telling the story mostly through Saint Paul, is a classic Tsiolkas anti-hero. When we meet Saint Paul, he uses his Hebrew name, Saul, and is Christ-hating executioner who prides himself on the brutal capital punishment of heretics and disobedient slaves. By the closing pages, however, Saul has transformed into a wise, loving apostle after famously being visited by the resurrected Jesus. This major story arc intertwines with a number of first-person accounts of various secondary characters who inhabit the same,  de-stabilised and evolving world.

But perhaps the most interesting element of Tsiolkas’s novel is his own troubled relationship to its subject matter. He has always explored queer identities and the societies that surround them. While Damascus shows sodomites gallivanting from slave-boy to slave-boy, the idea of homosexuality, as a way of being, or perhaps I should say as an independent sexual identity, remains unspoken—an amorphous, shameful concept. As an adolescent, Tsiolkas was estranged by the famous scriptures against homosexuality in Saint Paul’s first letter to Corinthians. In the author’s note, he writes, “I could not reconcile my Christian faith with the imperative to honour my own sexuality and independence, and so I became a non-believer.” Anyone with migrant parents who have strong ties to their faith will understand that abandoning belief is no light matter. The passage in question is 1 Corinthians, 6, 9-10, reproduced here from the NIV Bible:

Or do you not know that wrongdoers will not inherit the Kingdom of God? Do not be deceived: Neither the sexually immoral nor idolators nor adulterers nor men who have sex with men (10) nor thieves nor the greedy nor the drunkards nor slanderers nor swindlers will inherit the kingdom of God.

Digging a little deeper into the original greek reveals that the phrase “men who have sex with men” derives from the word arsenokoitai, ‘arsen’ meaning man’ and ‘koitai’ meaning ‘bed’. So literally, ‘men who bed with men’. It becomes clear, then, that the dominance of protagonists in a crisis of identity, torn between the unreconcilable forces of two conflicting ideologies, mirrors Tsiolkas’s own journey of self-discovery. Seen this way, Damascus is hardly a departure at all; rather, it’s an historical expansion of the prevailing themes of pretty much all his fiction, and the result is an intensely readable journey through the ancient world.

Tsiolkas’s Roman Empire is a hellish place, a Hiernonymous Borsch painting come to life, violent, merciless, and cruel—ripe territory for the bloom of Christianity’s teachings. The prologue begins with Saul observing a woman accused of adultery being stoned to death, repeating Jesus’s famous line, “If you are without sin, then case your stone.” From there, we descend into a goulash of blood, guts, and debauchery: unwanted daughters are murdered upon birth; slaves and soldiers dismember one another for sport in the gladiator arena; and I think immediately of the colourless landscape of Cormac McCarthy’s The Road as a kind of stylistic brother to Damascus’s world of gore and blood-thirst.

Nearly every page involves the murder, torture, or sexual violations of characters, either as a backdrop or within the immediate drama. In this way, it is, arguably, a true narrativising of the Old Testament. One chapter opens with a many-page, stream-of-consciousness sentence from the perspective of a peripheral character, Vrasas, “Drinking the blood that is pouring over us and it froths and spills from our mouths . . . we will not allow ourselves to spit to waste even a drop of this life for it would be ill-fortuned it would betray the sun the fire The God.” Christianity is thus seen as a revolutionary break from the values of a violent and chaotic world that seemed to have reached a dead-end (literally and figuratively). “Their foul gods know lust and greet and torture and death but they do not know justice,” Tsiolkas writes. “Our God gives us truth . . . a truth that holds for everyone, whether they be master or slave, rich or poor, man or woman, stranger or Jew.”

For contemporary readers, Tsiolkas’s novel does affirm some hopeful Christian mantras in an age where insincerity and ideological deflection continue to reign supreme. Or, in Tsiolkas’s words, “if we do not have faith that the Lord truly knows our suffering, we cannot believe inn a better world to come.” In the author’s note, Tsiolkas speaks to this desire for sincerity directly: “I have wrestled with Paul, wanting both to honour the great universal truths that I find compelling in his interpretation of Jesus’s words and life, but also to question the oppression and hypocrisy of the Churches that claim to be founded on these very same words,” he writes.

The book is essentially about hope, transgression, and the radical experience of shame. These sincere understandings, as Tsiolkas points out, may not immediately hit a sympathetic chord for readers in our secular age. “We might scoff at such an understanding,” he writes, but “we must also acknowledge how it was a promise that gave hope to the most destitute and despised in an often cruel and unforgiving world.” There’s very clearly and underlying parallel between Tsiolkas’s experience of coming-out as a gay man and Paul’s adoption of Christianity. This is most evident in the iconic moment of conversion, struck blind for three days after seeing a vision of Christ. This point, which occurs roughly mid-way through the book, shifts its overall tone, and introduces its treatment of shame.

Hope for the underdogs—yet another of Tsiolkas’s favoured tunes. Here, we see it in Christianity’s egalitarianism, of the kingdom of God as the great equaliser of all people on Earth. The revolutionary power of faith is depicted throughout the novel as a kind of light, glimpsed through the darkness. It is this source of light that empowers slaves and the poor and the condemned to believe in their redemption from a world that offers them none.

They all grasp for the light, trying to snatch parts of it, to hold it in their hands; but the light is as water, it runs through their fingers—but unlike water, it doesn’t drain and vanish, it grows and amplifies: it is all around but can never be grasped. It is everywhere.

It’s this extra-dimension of poetry and duplicity that underlies Damascus that elevates it from a simple stylistic excursion into historical fiction to a continuity of the themes and concerns that have dominated Tsiolkas’s writing since Loaded. There is something heartening about his good old novelist sensibilities, too. By that I mean, the book is full immersion; he’s a classicist. Although I’ve spent this review highlighting some of the subtexts and the crossovers between life and fiction, they’re buried in the tex. Never does the author interject, or rupture the dream. There is a rising popularity in contemporary writing to ensure that the novel ‘says’ something about society, identity, or political thinking. Tsiolkas has never ‘said’ per se, but always ‘explored’ what it means to be human.

What the book really nails is its representation of why Christianity became a earth-shattering revolution in the first hundred years A.D. Near the end of the book, Tsiolkas captures crucifixion-as-symbol in the face of injustice. Contemporary readers may very well forget (and Tsiolkas reminds us throughout) that crucifixion was historically a painful, humiliating and gruesome public affair; its intention was to demean and torture, originally punishment only for slaves. That is why many “would risk the violence of thieves and rapists rather than submit to the impossibility of a crucified and humble saviour”; at the time, a lowly crucified ‘God’ was contrary to the pre-dominant ideals of what God entailed. But Jesus’s crucifixion resonated as a symbol of humanity. In this one particular scene, Saul is speaking to a group of lower-class Romans about the crucifixion of Christ when suddenly a man shouts out the name of his son. “And one by one they begin to stand. A man calls out the name of his brother, a father of his son, another father moans and declares: ‘My son and his son.’”

Whether or not Tsiolkas has managed to accomplish his goal, to reconcile his Christian faith with his sexuality, remains unseen. But his wrestling with Paul’s teachings are evident upon every page, creating a compelling interpretation of Jesus’s word and life that also questions “the oppression and hypocrisy of the Churches that claim to be founded on these very same words.”

Jack Cameron Stanton is a writer from Sydney. His work can be found in The Australian, Sydney Review of Books, Sydney Morning Herald, Southerly, Overland, Sweatshop, The Lifted Brow, and Mascara Literary Review, among others.