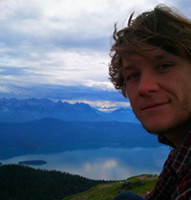 Jake Goetz lives in the southern suburbs of Sydney. He has also lived in Munich, Germany (2011) and Graz, Austria (2013) where he studied on exchange. His poetry has appeared in The Sun Herald, Rabbit, Voiceworks, Jaws (Austria), Tide and Otoliths. He completed a Creative Writing Degree at the University of Wollongong, receiving an Asiabound fellowship to Sun Yat-Sen University in China. He is a fiction editor for Mascara.

tree stump sits on brick ledge
wet from rain, dew hangs
from iron fence, could be watery eyes
peering into the late-morning
but it’s mostly dew and a Cockatoo sounds
cigarette burns, feet rest upon pebbles
as shade separates the yard
and a plane moves like a container
of consciousness, banking left
over the Royal to tip out into the city