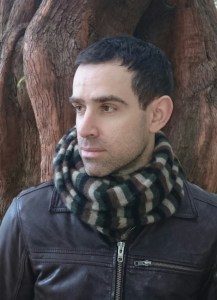 James Byrne is a poet and editor, born near London in 1977. His most recent poetry collections are White Coins (Arc Publications, 2015) and Everything Broken Up Dances, Tupelo Press 2015. Other collections include Blood/Sugar (Arc 2009) and Soapboxes, a pamphlet of political satires (KFS, 2014).

Byrne is a translator and editor. He co-edited the first anthology of Burmese poetry to be published in the West (Arc, 2012, Northern Illinois University Press 2013) and Voice Recognition: 21 Poets for the 21st Century, an anthology of poets under 35, published by Bloodaxe in 2009. Since 2002 he has edited The Wolf, an internationally-renowned poetry magazine.

His poems have been translated into various languages, including Arabic, Burmese and Chinese. In 2009 he won the Treci Trg poetry prize in Serbia and, as a result, his Selected Poems: The Vanishing House was published in Belgrade. He was the Poet in Residence at Clare Hall, University of Cambridge and a Stein Fellow of New York University where he completed an MFA in poetry.

They said I came out with a thorn in my foot—
hillcloud child who spoke with a large name,
blossy among broken hedges and molten fields.

When the house hellbelled I retouched an image
of hyaline mists gridlocked to corn. The memory
of sky over Pankridge Farm held like a salve.

I listened to the beginning patience in a voice
until it was clamant, exasperated to pure nerve—
‘Home’ it repeated. ‘Home. Come home’.

from ‘Economies of the Living’

Yeats in his psychopomp. Blavatsky
a lion among quadrapets. Similitudes.
As if accolades were lofty as cliffs.

Maud Gonne pursued, but as worthy
conquest? I would rather be a falcon
or rook, with mischief to provoke her.

Brother, remember how we cast ourselves
as children carried off by Scottish eagles.
Found affrighted but reclaimed by parents.

A family of silken music caged by Labat
for rats. We are purposed for pleasure.
Touch the wings to kill its instrument.

Europe’s incommode: it is not free
to roam continents like the horse did.
Tack, yield, never knowing winter.

Turnstiled like prisoners of the sedan.
Tractable and familiar. The Bedouin
shares his tent with foals, surrenders

his courser mare to the French consul.
The things a horse has traded for gold.
Closely farried, shockpools for eyes.

Brute like us. Brute of the woods.
Sternly countenanced then maligned
like cracked hutches of the counselled.

Epitaphic, ritualized buriers and so
larger than most men. Upwards of you
unfolding a napkin and as Buffon said:

fond of comfits but, unlike the baboon,
clever to show a man where the door is.
Trained servants, able to work as we do.

What is wrong with the ex-pats and the French?
Only two of us show up for The Rimbaud Walk
despite the ballyhoo: A 5 Mile Drift on Absinthe.

Sure, there’s a grin in the wind, but what prudence
nowadays; no surprise the UMP still shun a plaque
for 14 Rue Nicolet. What is wrong with the French?

Rimbaud, at sixteen, arrived here from the Ardennes
for havoc in the house of Verlaine’s new stepparents,
and for Verlaine himself, who was gone on absinthe.

At night, they stumbled home under the low-lit lamps
surveyed by Verlaine’s jilted chanson, Mathilde Mauté,
who despised the bad manners of these mountain French.

It is a house too prim for bohemians or boy peasants
agreed the in-laws. Lice-ridden, Rimbaud slept on the lawn
naked in the sun, peeled to his ribs, popeyed on absinthe.

Mathilde saw her life slide away whilst pregnant.
Verlaine threw little Georges at the wall and walked.
This house is a shamed house, censored by the French.
Before Rimbaud, Verlaine was hooked on absinthe.

‘How slowly dark comes down on what we do.’
Theodore Roethke, from “In Evening Air”

1.
If you drink from the shuck of the storm
you will always be tainted by its darkness.

2.
The lacquered surface of the canal at night
is darker than the darkest shroud of Jesus.

3.
One thing darker than the roses’ shadow
—the cold fire of the roses after thunder.

4.
Far murkier than possession—the shiphold
shackled to the hells of human darkness.

5.
When the rusted machete cut back the cane
it sharpened darkly in the emperor’s silence.

6.
Amnesially waiting in the cinema’s darkness
—it cannot be separated out from loneliness.

7.
The panmongolist was so afraid of the dark
he asked to be buried in a candlelit coffin.

8.
A death-pecked cry darkens the entire city
and is hoisted through the shrieking world.

in the desert path above Tartous

through salt tides
and toothsucking sand

the bell of your name

the upturned hulls
of fishing boats
wet with life

your son walks
the herded miles

where in these Mallajah hills
is the lamb of your niece?

an amphitheatre
labored over
brick-by-brick

to speak is a game of chess

terror in the telephone
where no one appears to
listen

dread of breath
silence that roars

Imperious eyes of the trained killer
draped in a white flag, who would
maculate us with the venom of his clan.

Here, where death is the stone inside
a rotting fruit; what would they ask
if not turning away at the final demand,

which is speech? They enter the gable
of the national park and do not tell us
and are with themselves and are gone.

Selection from Everything Broken Up Dances (forthcoming from Tupelo Press, USA)