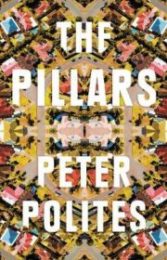 In her essay on suburbia, Helen Garner discusses the politics of location in Australia and how real estate, or an acute political sense of place, seems to situate people on the social scale. Back in the 1990s, Helen Garner lived in Sydney’s poshest eastern suburbs (Elizabeth Bay and Bellevue Hill), from which Western Sydney seems to be unaccessible, somewhat too remote to explore, and possibly an eyesore which is best left out of sight. As her essay ends on Gerald Murnane’s tribute to these “lower-middle-class suburbs that no one ever goes to or hears about in the news”(1), Murnane’s recitation of the various modest streets in which he lived in his youth surreptitiously morphs into “a splendid and mysterious poem.”(2) What was perhaps to be primarily taken as a solemn moment of sincerity has been sublimated through Garner’s writing skills. These fine creative skills are largely shared by Peter Polites. Barring the lyrical gloss and sentimentality.

The Pillars is Peter Polites’ second fiction book, after the much lauded Down to Hume (2017), a queer-noir novel which made it to the shortlist of the NSW Premier’s Literary Awards in 2018, in the Multicultural NSW Award sub-category. Modelled on “notorious gay right-wing troll Milo Yiannopoulos”, (3) Pano (pronounced the Aussie way, not Panos!) is an obscure poet who has been given a chance to earn a living though his creative writing skills by ghost writing Basil’s life story. Based in Pemulwuy, an ethnically diverse suburb in Greater Western Sydney whose history is briefly mentioned in the opening chapter, Pano is in a complex cis male gay relationship with Kane, his landlord, sex friend and secret infatuation. Their connection is no Brokeback Mountain bromance. Rather, they have the kind of loose relationship which you find in Tsiolkas’ narratives: random sex, one night stands, and the occasional group sex are spicing up the protagonist’s life whose reliable bedrock is provided by a regular sex partner.

Polites has moved away from the issues of same sex domestic violence which he explored in Down the Hume in order to lay greater emphasis on suburban aspirations and fluctuating identities. However, hyper-masculinity remains a central concern, chiefly epitomised in The Pillars by Basil, a straight self-made entrepreneur, and queer Kane, whose athletic physicality and sexual performances endorse him as the alpha male of the pack.

Like Christos Tsiolkas — with whom he has been repeatedly associated through various literary events (a discussion at Concord Library in Canada, a conversation at the Wheeler Centre and on the ABC book show)  —, Peter Polites can be defined as a queer, second-generation Greek Australian novelist who articulates the triangulation of gay sex, class conflict and ethnicity in slice-of-life novels. Where Tsiolkas is concerned with grounding his stories in Melbourne’s working-class suburbia, Polites sticks to the impoverished migrant suburbs of Western Sydney.

Beyond these commonalities (and others which I will not be able to discuss within the restrained scope of this book review), both writers are angry men at society, but each with their distinct voices and crafts. In this respect, it is noteworthy that Polites’ rage, mediated through literary ploys such as irony and satire, appears to be more subdued in his semi-autobiographical novel than the violence which transpires in Tsiolkas’s words, and in the thoughts and actions of his protagonists. For instance, Polites’ characterisation of Basil, Pano’s high school friend, exemplifies the use of bittersweet irony at its best:

“He was one of the first boys in our school to have the hair waxed from his legs, claiming all athletes did it. Later, he was a trailblazer for the young male dogs by using an experimental new laser treatment to remove all his body hair. In our last year of high school, I overheard him talking about how important natural beauty was to him, which was why he didn’t bang wog girls, because they spent too much time on themselves.” (21)

With a keen eye for details, Peter Polites not only examines gay domesticity through the lens of a hyphenated Australian but also presents with a vitriolic social critique of Australia’s consumerism and culture of greed which is depriving the younger generations from affording a home in Sydney’s highly inflated real estate market:

“I stopped at the window of Vas Bros Real Estate and looked at all the apartments for sale, trying to find the logic in a two-bedroom apartment in Bankstown selling for half a million dollars. There were professional photos of men in polyester suits holding gravels and standing outside houses. A human-sized decal of a balding man in his finest suit with dental-work smile grinned at me like I wasn’t in on the joke.” (19)

By foregrounding social advancement and materialistic success in his story of modern-day Australia, Peter Polites is probing the deep-rooted insecurity which underlies this misguided ethnic aspirationalism. His unforgiving indictment of Australia being caught up in consumerism and rapacity is to some extent reminiscent of David Williamson’s satirical plays such as The Emerald City (1987) and Up for Grabs (2000), but perhaps brought to a higher cynical pitch, one which ethical readers might find unsettling.

JEAN-FRANÇOIS VERNAY’s The Seduction of Fiction (New York: Palgrave) and A Brief Take on the Australian Novel (Adelaide: Wakefield Press) were both released in 2016. His latest book, La séduction de la fiction (Paris: Hermann, 2019), which deals with all the cognitive mechanisms underlying literary passion, is yet to be translated. He has just been commissioned to edit a book on international perspectives on Australian Fiction and is completing his forthcoming book in English on Australian fiction and the neurohumanities.