Jerry Stand Up by Mark O’Flynn 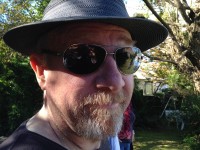 Mark O’Flynn has published four collections of poetry, most recently Untested Cures, (2011). His poetry and short fiction have appeared in many Australian journals as well as overseas. His novels include Grassdogs (2006), and The Forgotten World, (Harper Collins, 2013). He has also published the comic memoir False Start. He has also written for the theatre, including the popular play Eleanor and Eve. He lives in the Blue Mountains. A collection of short fiction, White Light, was published by Spineless Wonders Publishing, 2013.

Remember that you have chance and possibility

Jeanette looks up from her screen to give me a funny kind of look.

‘Jerry. Jerry Burgoyne. Have you seen him?’

‘I thought I saw him earlier,’ she says.

Jeanette’s heavy-handed eye shadow resembles the lingering bruise of a couple of black eyes, like over-fried eggs. Her ear rings are Christmas decorations, even though it is July.

‘Maybe that was yesterday,’ she says, unsure.

Jeanette’s cubicle is decorated with photos of her pets: a tortoise-shell cat and two dogs. The dogs, a Dachshund and a Doberman, have ribbons tied about their ears to make them look like cartoon characters of dogs, perhaps at a rodeo.  They look rather sad and humiliated about it. There are no photos of her children. I do not know if she has any. She turns back to the figures she is poking into the keyboard with bright pink nails.

I take my piece of paper to the next booth where Ken McKendry is doing something similar. His booth, comprised of purple office partitions, is decorated with pictures of his family whom he never talks about. Ken keeps pretty much to himself, for better or worse. In the cubicle sound is muffled, like being in a church made of fibre glass or builders insulation. It makes you want to whisper. His personalised coffee mug stands on the desk, at the moment filled with pencil shavings like the fins of tropical goldfish.

‘Have you seen Jerry?’ I ask, shaking my leaf of foolscap. All it needs is a signature and my work here is done.

‘Not since this morning.’

‘Are you sure it was this morning? I haven’t seen him all day.’

I glance at the spreadsheet on his computer, but it doesn’t mean much to me.

His return to his typing I take as my cue to leave. His fingers, minus the pink, sound like a stampede of miniature horses over the tundra, or perhaps birds in the ceiling.

I take my document and move down the corridor. No one has seen Jerry. Some people think they have but they can’t be sure.

‘Maybe he’s gone for coffee,’ suggests Trudy, in stores, but I find this idea preposterous.

‘Maybe he’s in the dunny with the runs,’ offers Dale, the office clown, from HR.

The security guy doesn’t know who I’m talking about.

‘Maybe he didn’t come in today,’ says Mrs. Hyland, our supervisor, who is preoccupied with getting her accounts ready for an audit. ‘Maybe he has another unexpected funeral?’

There’s some sort of snide tone in her voice, which I don’t respond to. Her face looks red and thwarted, like a wrinkled balloon with half the air leaked out of it.

‘Jerry was very rude to me the other day, which I didn’t appreciate, and you can tell him that from me when you find him.’

I refrain from pursuing this issue. Would the Jerry I know do such a thing? It’s the first I’ve heard of it.

I go to the toilets and thrust my head in the door.

My voice echoes, as in an empty railway station. There is an intense silence, as if someone has taken a sudden breath and is holding it.

‘He’s not here,’ a voice comes from the end stall.

‘Is that you Jerry?’

‘Sorry. Are you all right?’

‘Of course,’ he says rather indignantly. ‘Why wouldn’t I be all right?’

I leave, wondering what if Jerry is in the Ladies? What if he’s injured somewhere, waiting for the cleaner to find him?

The lady in the cafeteria, Mavis I think her name is, hasn’t seen Jerry either. Maybe he has stepped out for a breath of fresh air? Or is eating his sandwiches in the gardens across the road. I rack my brains to think where Jerry might have got to. I ring his mother. Jerry still lives at home, (or rather has moved back home again after a disastrous dalliance with Sonia from the pay office).

Mrs. Burgoyne says she did see him off this morning bright and early.

‘He looked so smart,’ she says, ‘wearing his nice new suit.’

She expects him home at six. It’s Thursday. She’s cooking rissoles. Jerry is forty three and he is still eating rissoles cooked by his mother. That will certainly show Sonia where she went wrong. I ask if she would mind if I come round to see Jerry this afternoon – evening really, as I have to stay at the office until five. There is something important I need to ask him.

She says, ‘That would be fine dear.’

After work I stop by the pub – The Cricketers Balls – where Jerry and I sometimes meet for a drink, also to disparage the gossip and office politics that somehow surrounds us and infects the culture of the working day. The pub is decorated with deep plum-coloured drapes that absorb the light and muffle the convivial chit chat of two or more friends after work. He isn’t there. The barman hasn’t seen him and, in fact, there is no one here I know apart from Sonia, over in a corner who gives me a glare, and I quickly take my leave

I drive to Jerry’s house in Glenferrie, but he still hasn’t returned. Mrs. Burgoyne lets me in. Her hair is tightly curled like a piece of brain coral. She thinks for a moment that maybe Jerry has gone to bed, he’s been feeling peaky.

When we open the door it is pitch dark in the musky room. She turns on the light but the bed is empty. She crosses the minefield of the floor, and opens the curtains, however even with the extra light spilling in the bed is still empty.

‘Do you know Geoff, I don’t know the answer to that. He used to be up bright as a sparrow, singing in the shower. But he hasn’t been doing that so much lately.’

‘What would he sing?’

‘Oh, songs… Come to think of it he hasn’t been running so much either. He used to go for a jog after work every day. He’s terribly fit. And then he bought himself a new suit. I thought it was to impress that Sonia. She’s a piece of work. But I was wrong about that.’

‘Perhaps that’s where he is now? Running.’ I suggest trying to fill the awkward, unexplained absence that occupies Jerry’s room. The air is stale. Private air. She tries to pull the door closed. I notice on his bedside table a book I cannot read the name of, I think it might be Chinese, and a little knotted piece of string. To an unfamiliar eye such as Mrs. Burgoyne’s it might look like nothing more than a sex toy, a garrotte for Jerry’s penis for instance; but I know it is for him to practice his affirmations, a ritual he has enjoyed for many years. I have seen him at it in his office cubicle muttering under his breath:

‘Every day in every way I am getting better and better.

Every day in every way I am getting better and better.’

However I have no time to explain this to Mrs. Burgoyne. She asks if I would like to stay and eat some rissoles but, tempting as this is, I have to get home to my own tea on the other side of the city, a far cry from rissoles let me tell you.

I ask if she can get Jerry to ring me when he gets home. He has my number.

The next morning I phone Mrs. Burgoyne who informs me that Jerry is still asleep. He must have been late in. He’s a grown man, she can’t dictate what time he comes home.

‘Oh no,’ she corrects herself, ‘I think he’s in the shower.’

At the office I visit Jeanette in her cubicle. The air smells of Spring Mist.

‘Have you seen Jerry?’

She gives me a funny look. Her two brown eyes like an astonished owl’s. Christmas in her ears.

‘Not since the last time you asked.’

The cat and the two dogs look at her from the cubicle wall, framed by the unlikely stage props of a wagon wheel, a hay bale. Am I the only person who cares that Jerry has vanished? Ken McKendry hasn’t seen Jerry either. Someone told me a long time ago, maybe it was Jerry, that in the photo of his family on the wall one of the children had passed away and that is the reason he doesn’t like to talk about them. Well that’s probably a pretty valid reason, I told Jerry, if it was Jerry.

‘How’s the family, Ken?’ I hear myself asking.

Dale in HR hasn’t seen him either.

Nor has the security guy.

It’s like he’s just turning the corner in the street ahead of me, disappearing from the tangent of my eye. It’s like he has vanished into the ether

‘What’s on the piece of paper Geoff?’ she asks.

‘What piece of paper?’

‘That piece of paper you’re carrying around.’

‘I need Jerry’s signature. In order to finalise this report.’

Reluctantly I hand it over. I can sense the others have been talking behind my back again.

‘Geoff, there’s nothing on it.’

‘It must still be on the printer.’

‘Why do you need Jerry so badly?’

‘I need him to sign it. To finalise things. He’s missing. Aren’t you concerned?’

‘Well Geoff,’ she looks at me strangely over the top of her glasses, ‘yes I am concerned. You keep looking for him, and when I finish here I’ll come and help you. We’ll get to the bottom of this once and for all.’

I back out the door. She doesn’t know where Jerry is. She hasn’t got a clue. She says:

I don’t know which way to turn.