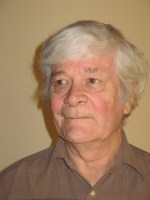 John Carey is an ex-teacher of French and Latin and a former part-time actor. The latest of his four poetry collections is One Lip Smacking (Picaro Press  2013)

From the security cameras…

Some footage of the Mardi Gras and bummage and plumage: a corps de danse-sirs
in a ballet sequins; a security cordon of muscled jocks in frocks but non-threatening…
a mini sleeper-hold perhaps then let you down gently with a bedtime story; a dozen
Julie Bishops put the Medusa stare on each other on the back of a trailer; a Sophie
Mirabella look-alike sinks her teeth into a rubber snake. It’s all rather jolly really,
nothing for Jehovah to get his robes in a knot over.
Two men in a lifeboat perched on the top of the hill, link arms. The taller,
in a blue suit and tie, wiggles his wing-nut ears. The second, in a fur-collared
parka, with narrow eyes in a sinister riverbank face, croaks through thin lips:
“ Turn back the floats !”. “Turn back the floats !” shouts his comrade-in-arms.
In a joint press release, they affirm their belief in a pluralist society:
“ What else is an oligarchy? Can’t you count? It’s not the unnatural things they do,
it’s the propaganda!”
“ What do you mean?” says his partner, “ ‘unlikely bedfellows’? Are you from the ABC?”