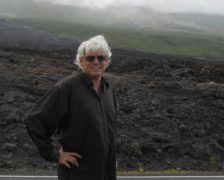 John Kinsella’s most recent books of poetry are Firebreaks (WW Norton, 2016) and Drowning in Wheat: Selected Poems (Picador, 2016). His most recent book of short stories is Crow’s Breath (Transit Lounge, 2015). He is a Fellow of Churchill College, Cambridge University, a Professorial Research Fellow at UWA, and Professor of Literature and Sustainability at Curtin University.

Smug as pulling an all-night session cooking the books,
a half a trillion is sucked out of the country over
half a decade, all those zeroes, all that decimation.

A regional power. A projection of force. Consolidation
behind borders. Balance. ‘De-coupling from economy’
so fall or fail, the percentage will stay steady for Defence.

Horns and pointed tails, they get drones. With drones
you can go anywhere through the three worlds. North
or south, east or west. Investment. Capability. Readiness.

This is already less of a poem because it does more than
suggest. It is not allowed to do its own work. Language
is the loser here. The fluted gowns of Dante and Virgil

can’t bring enough solemnity or joie de vivre to this
unique and happy moment. The musculature of devils
is something addictive, awe-inspiring. At first,

they use reasonable language, but if challenged
they smell of burning and so do you. This is the acid
used in manufacture, and it’s the by-products

of Innovation, Industry and Co-operation. No use
resorting to personal insults as the spreadsheets
are filled in. Electronic warfare. Flesh-hooks

new punctuation marks. Think of it this way:
a novelist, one who has no empathy with the bush
in any real way whatsoever, stays for a few weeks

among the parrots and eucalypts, and captures
a bit of the stereotypical for his page. The renditions
of urban culture or colonialism or small towns

need rounding out. He is writing a White Paper
on habitation and nature. The edges where, say, a possum
rubs against the tin roof, or pokes its nose into food stores,

or pisses through the ceiling. Or maybe the essentialism
of parrotology, its scope for global renovation, a redemptive
unleashing on the thinktanks of the world. Policy. Inspiration.

Defending the wealth of words none of us can feel whole.
They are sieved through the orb-weaver’s web, through
Defence Department computers. That not-quite blood

The vipers are asleep.
The pond with shadows
cut away on the Spitzberg

is frozen solid, bristling
with sticks poked in to test
viscosity, then locked into place.

This is the breeding
refuge of the Kammmolch,
red list species.

Off their face, young men
and women, boys and girls,
stagger around its bleak eye.

They settle on a fallen conifer,
a bench of moss, and stare.
The Kammmolch awaits

hover over beech and oak,
seeing through to the forest
floor, the sad youth.

Down in the Neckar
and Ammar valleys,
election posters

are getting workovers.
Citizens are crossing swords.
So many interferences.

The paths through the forest
are bituminised. Once, on terraces,
grapes were grown. Down below,

where the Kammmolch once ranged,
sediment accrues. The fragment
of forest looks to diversity

to absorb the come-down
from methamphetamines, that look:
Kammmolch hoping to breed

where forces have shut them out.
Tread carefully in your withdrawal.
May the pond take eggs and light.