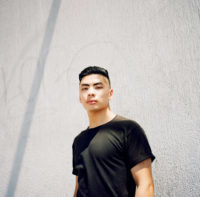 Stephen Pham is a Vietnamese-Australian writer from Cabramatta. He is an original member of SWEATSHOP Writers’ Collective. His essays and fiction have appeared in Sydney Review of Books, Overland, Meanjin, and Griffith Review. In 2018 Stephen received the NSW WRiters’ Fellowship from Create NSW to commence work on his debut manuscript ‘Vietnamatta’, to be published by Brow Books.

The Central express train rattles and sighs as it pulls up to Hornsby Station. I take a deep breath and hold it. Slide open the yellow door speckled with grime. Step on, look at the toilets. Neither of the doors are open but I’m not taking a chance. They’re sloshing with piss from Central Coast bogans. Turn, open the spring-loaded door, and step into the passenger’s section, which is carpeted with vinyl seats. It’s packed. I let go of my breath. The dampness of human bodies mixes with Lean Cuisine chicken, cheese, and pasta and burrows into the back of my throat. I gag. I should turn back. Stand between the carriages, where the air is fresh and the ground is shaky. No. It takes 30 seconds to get used to a bad smell. In a minute, it’ll be like I’m lounging in my White godfather’s TV room. Though last I heard, he’s living in a shipping container with his golliwog collection.

Upstairs, the seats are filled with people wearing red-and-white jerseys. Oh, it’s Friday. They’re headed to the footy. There’s a seat in the middle of the carriage. On the aisle side is a bag of Chicken Crimpy Shapes. I take the window seat, stepping over the glittery bits crushed into the carpet. It’s pretty dark outside. I can’t see much save for the streaks of rain outside and the line of steam creeping up on my reflection inside.

Behind me, someone with the nasally honk of Aussie Home Loans guy talks loudly. Instead of saying, ‘At Aussie, we’ll save you,’ he says, ‘The freckled moll’s place, ahh, it looks like housing, but, ahh, it’s not, so, ooh, she acts like she’s, ah, better than everyone.’

I grin at my reflection. I love this. The dumb-ass conversations on this train, which runs from Newcastle to Sydney, can’t be found anywhere else. The bogans, like Aussie Home Loans, are the loudest and crudest. One Wednesday arvo, a blonde lady in Mariah Carey bejewelled sunnies sat in the nigel seat yelling on the phone. She stood up and waved her free hand as she yelled, ‘Jayden, Jayden, Jayden. You fucked me, you fucked me reaaaaal bad. Real bad. Why’d you tell the court I was waving the knife around? Don’t ya remember how I was chopping tomatoes? I was chopping the tomatoes, and you said something. You said something, and I looked up. And I looked up and pointed the knife at you. And I pointed the knife at you and I pointed it away. Remember that? I was not waaaving the knife, I was pointing it.’

It took me everything to not laugh out loud then. I didn’t want her to point a knife at me.

Now Aussie is complaining about how the University of Newcastle pays him five dollars an hour to clean, but at least he makes 100 a week. My bad. He’s genuinely poor. I feel gross for laughing at him now.

His mate who has the deep, controlled drawl of Fitzy says, ‘Oi, but yeah…but nah…you take home…200 a fortnight, ay?’
That’s the same thing. We can’t all be Asians when it comes to maths, though. Shit. I’m doing it again. It’s not probbo if I’m laughing with them, but Fitzy seems dead serious.

He continues, ‘I’m so stoned, brah…Oi but, but…you know what they call my house? Cheech and Chong…come to Wyong.’

Aussie honks laughing. Guess I’m not with them after all. I’ve never seen Cheech and Chong, but I know it’s a stoner comedy. Toby McGuirk, the only other metalhead in high school, once told me he smoked dog shit. Was that like crack, or acid, or what? ‘I mean it’th thit. From a dog,’ he said. I’d seen him play Frisbee with dried cow dung before. I nodded. I guess it was only a matter of time.

The train pulls up to Epping, black asphalt, grey metal ceiling jutting off the wall. Platform’s full of chinks and curries: black pantsuits, Herschel backpacks, puffer jackets and wire trolleys. Train’s about to get super crowded. I hope no-one sits next to me. But if they do, they’d better not be one of those dickheads that spread so much our knees are touching and the warmth of their leg makes me want to puke and retract mine but I also don’t want to seem weak so I just keep it there. That’s the worst.

The windows steam up completely as a procession of Asians fills the aisle. A burly Chinese guy with bulging, still eyes like a goldfish, plods forward. His white polo is splotched with pink. Rubber and blood floods my nostrils. Raw meat. An abattoir worker, maybe. If this was 2000 years ago, he’d be the town butcher. That’s what he was made for.

He’s hunched. Looks straight ahead as he gets closer to me. He’ll sit near the bogans. They’ll think he’s just gotten back from slaughtering strays in the neighbourhood. Nope. He grabs the handle on the seat in front of mine, swings his body around, and plops himself on top of the pack of Chicken Crimpy. It crunches. Did he even notice that? I scoot away. Our upper arms are touching. I’m pressed up against the window. Can’t be helped.

We’re moving. Conversations hum but the bogans have fallen quiet. Then Aussie says, ‘There’s, ah, so much Chinese, ay?’

Oh no. I hope this isn’t heading where I think it’s heading. Aussie’s in housing commission. Aussie makes five an hour cleaning up after uni shits like me. Aussie’s got nothing to look forward to but smoking up and watching the footy. They’re just not used to the city.

‘Ah, everything!’ Aussie shouts. They piss themselves laughing.

Dickwad. I was rooting for you. I thought these idiots might be not-racist, but I’m the dumbarse for believing in them.
‘Hey, ah…sweet and sao-wah POK,’ says Aussie, in the voice of the City Wok guy on South Park.
Fitzy laughs, ‘Oi, but listen to this…Sweet and sao-wah POK.’

Cortisone floods my shoulders, stiffens my neck. I turn my head a little, not enough for the Butcher to catch me, and glance around. As far as I can tell, us Asians outnumber the Aussies by three to one. Maybe even more. We’ve got the numbers. But people are just talking to each other or looking right ahead. No-one’s turned around to check the bogans. Maybe it’s because most of us are old, or don’t speak English, or don’t care. Maybe we’re scared to break the silence.

Air conditioner whirs. Rain drums on the train’s tin top. I wipe the steamed window with my right shoulder. Outside is black.

I breathe in deep, chest swelling. Fuck it. I stand up. Shoulder drags against Butcher’s. Out the corner of my eye, I see him watching me, his mouth ajar. My wrists pound. I turn around, gaze sweeping the suits, students, and oldies before locking onto Aussie. He’s a fat fuck with acne scars on his bright pink Wiffle ball face. St George Illawarra frayed at the bent bill. He stares at me, his grey eyes boring into mine. Fitzy props himself on an elbow, twists around to look at me. He’s got a buzzcut and Golden Arches hairline, face long like a mountain goat. ‘You hillbilly cunts better shut the fuck up,’ I shout.

Aussie’s thin lips draw back. Yellow teeth rest on his bottom lip. Hands rise to the sides of his face. They pull back the skin next to his eyes. His head wobbles from side to side as he says in the South Park accent, ‘Aw! Sutt da fuk ap!’
I’ve got nothing. I flip them off and sit back down. Carriage falls silent. My head’s throbbing. I couldn’t have done any better. You engage with idiots, you’re the idiot. Whatever, man. I can feel the Butcher staring at me. Maybe he’ll move away. He doesn’t. Just keeps staring.

A deep male voice pipes up. ‘Youse better stop it. This train’s full of them, youse know that? And one of them’s just gotten offended. I’ve been listening to youse go on since Gosford, and I’m sick of it. It’s not funny. I’m a cop on holiday, don’t make me do my job. It’s not funny. Don’t make me start up again. Don’t encourage him.’

The rest of the train ride is silent, save for Fitzy squeaking every now and then, trying to get Aussie to laugh.
At Strathfield, red brick, green poles, and black asphalt, the train starts to slow. Holiday Pig gets up and heads towards the bogans. He’s got a tiny face and a huge head like William H. Macy. Aussie honks, ‘I’m ah, sorry,’ to Holiday Pig. Pig replies, ‘You’re right, mate.’

I go in the direction I came. Hold my breath by the toilets in the mezzanine.
As the train comes to a stop, someone taps on my shoulder. I turn around. It’s the Butcher. Eyes shine, fat lip hangs, sounds like he’s trying to swallow air as he says, ‘You speak Chinese?’

I shake my head and say, ‘斩你做猪肉碎、喂畀狗.’