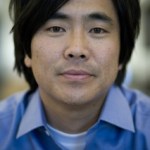 Lee Herrick is the author of This Many Miles from Desire (WordTech Editions, 2007) and Gardening Secrets of the Dead, forthcoming from WordTech Editions in 2013.   His poems have appeared in ZYZZYVA, Hawaii Pacific Review, Many Mountains Moving, The Bloomsbury Review, and online at From the Fishouse, among others, and in anthologies such as Highway 99: A Literary Journey Through California’s Great Central Valley, 2nd Edition and The Place That Inhabits Us: Poems from the San Francisco Bay Watershed.  He is the founding editor of In the Grove, and he was the guest editor of New Truths: Writing in the 21st Century by Korean Adoptees for Asian American Poetry and Writing (2010). He lives in Fresno, California and teaches at Fresno City College and in the low-residency MFA Program at Sierra Nevada College.

Because after imprisonment, you could laugh
with your mouth so wide open, as if to swallow
the swirling bats of the CIA, because when you
disappeared in 1971, your friends thought
about your poems and you going back to heaven,
because I am dreaming of the sunset over Eurwangni
tonight, there is jujube tea in Insadong waiting for us.
Did you drink every hour of 1972?
And when they found you, unable
to remember your name but that you were a poet,
did you remember the answer to your own question?
That there is no answer at all but the request that
someone would find you in that fractured slur,
the tired lean and the pen your only possession,
that someone like her, with a language like food,
would know how tea can restore such fatigue?

I am four bones from a cow after the shotgun.
I am the idea that did not detonate.

Brothers, we are Korean, so we know
about fracture – family, country, tongue.
We know the volcanic descent of government.

Once, a woman told me
I am the only one who understands
the cost of her survival.

So we did all we could.
We touched each other’s hands,
inhaled deeply, contemplated not letting go.