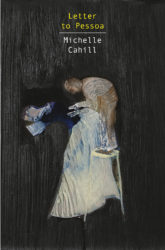 Letter to Pessoa fuses prose, poetry, and literary criticism, and is a hymn to the Republic of Letters. Michelle Cahill’s stories are set in multiple locations: Kenya where she was born; London and Australia where she grew up and now lives, respectively; India which is her family’s country of origin; but also Europe, Latin America, and the USA. As a writer, reader, and fellow traveler, she revisits through the power of fiction the literary canon and authors such as Lorca, Borges, Woolf, or Derrida. Like the South Asian-American character Gogol, in Jhumpa Lahiri’s The Namesake, Cahill’s description as Indian-Australian as referenced on the Giramondo book cover, seems to be a misnomer. The sophistication of the collection’s display of a painting by Madeleine Kelly entitled Treatment for Hysteria is unusual of self-proclaimed Asian Australian literary works, whose cover often betrays the cultural provenance of their author by assimilating the latter to an archetypal Orient. Cahill uses the unmarkedness of the Western referent to develop universal themes linking hysteria (from Greek hustera meaning ‘womb’) to femininity, artistic creativity, and the pleasures of Eros.

Many stories in this collection deal with the subject of erotic relationships, although they are not all pleasurable. Inspired by the teachings of Buddhism, Cahill shows lust to be the cause of much of our suffering as human beings, drawn as it is by an illusory desire for completion. Yet at the same time, this is an illusion worth falling for and pursuing, like writing and reading. Lovers’ words and word lovers are treacherous, as Sartre realised when he published Les Mots, and as his complicated relationship with De Beauvoir attested. In post-structuralist fashion, for Cahill’s characters commitments of various kinds (religious, philosophical, political, amorous, humanitarian, filial or otherwise) are always-already fragmentary, postponed, and proxy-like, if only because of the self-referential, relative, and contingent nature of our identities. The part of self-control or randomness in the detours, distractions, and choices we face both as conscientious and conscious agents leave us stranded, exhausted, even suicidal. With an existentialist nausea, tempered by the difficulties of the writing life, Cahill’s characters long for spiritual detachment and freedom while remaining faithful to their elusive quest for meaning, as in ‘Letter to Tadeusz Rózewicz’: ‘Is it unassailable as death then, this fate of being a slave to signification? And who determines it? How did this happen? I am shattered and vaguely nauseous.’ (230)

Uncertainty is true of the human condition in general but is characteristic of the writing process in particular. Repetitions, draftings, effacements, are part and parcel of a ‘medium — language—’ which, unlike other forms of artistic expression such as painting or music, intrinsically involves precision of meaning.’ (Haskell) This is one reason, I believe, why Cahill used the letter form in her collection. Her fetishistic epistles to various totemic figures of the writing scene — Nabokov, Hemingway, Genet, Conrad, and many others — interpellate the reader with a directness that is as intimate as it is disquieting, for it inscribes the insignias of difference, absence, and death in the very place of the addressee. In some passages, Cahill lays bare the fallacy of first/third-person narratives, for ‘accordingly, this author, this narrator, this third person, is other than me entirely.’ (Cahill 40) One always writes for an idealised Cause or Other, if only for one’s projected, fictional selves, in the manner of ‘internal monologues.’ (Cahill, 60) Through the dreaming of reality, the origin, sex, or trace of an author’s haunting presence within the text matters little. With Barthesean sensibility, Cahill thoroughly deconstructs the artificial distinction between author and narrator/narration, since epistolary exchange always-already involves a double address, to the Self as to the Other; writing under erasure, thus.

Cahill’s collection further posits the impossibility of the presence of the body in writing, other than as an object of fantasy which must be distinct from its author. The body has its own logic, will, and language that cannot be captured in words, unless as prosody. Language’s failure to enshrine presence is where poetry starts: ‘Language is fundamentally abstract (unlike movement, colour and line) but literature uses the rhythms, sound patterns and textures of language to overcome that abstractness and capture something of the sensory qualities of experience.’ (Haskell) We can speak of the material and visual resonances that certain choices of words and assemblages Cahill’s aesthetics will not fail to elicit on the reader. Some metronomic cadence or ‘meretricious rhyme’ (60), such as the ‘automatic’ (Cahill 20) nature of physical pleasure or the ‘mechanical’ (21) to and fro of heart valves heard reverberating inside the head on sleepless, feverish, lonely nights, prove to be a source of pain while other, more soothingly ‘joyful repetitions’ (34) are found in the ostinato of a tenor saxophone (33) or in ‘tabla rhythms.’ (91)

For Cahill, writing, too, can be both a painstaking and indispensable activity. At times, her personas write to be loved or to be heard (‘words are all we have — they speak to us and we echo back’ (61). At others it is either the deeply ethical nature or the amoralism of writing; the way writers are ‘smugglers of the imagination,’ (232) which petty criminals such as the drug dealer in  ‘Letter to Jean Genet’ find attractive. Most of the time, though, writing consists in a form of hallucinated daydream in which the Self is allowed temporary escape from pressing commitments (professional, marital, motherly or otherwise) as well as from the humdrum and agitation of modern city life, as in Cahill’s story ‘The Lucid Krishna.’ Her literary creations seem like playful recreations, as in ‘Letter to John Cotetzee.’ Melanie Isaacs, the marginal, silenced woman of colour and university professor David Lurie’s illicit, secret student lover in Coetzee’s Disgrace is given the possibility of a ‘write back’ in the manner of Susan Barton’s letters in Foe, Coetzee’s adaptation of Defoe’s classic Robinson Crusoe. Can we see in Melanie an avatar of Cahill’s own multiple personifications? Who is this voyeuristic eye/I addressing us as readers from the footnotes of history? As Cahill argues in the author’s note, ‘The letter form…creates a double address and a double narrative between two subjects, reader and author. In this way it can question the status of identities.’

Following Cahill, equally questionable is the status of the literary critic or ‘re-viewer’ as a cover-up for the belated gap which writing as immanence irreducibly inscribes. The commanding ‘you’ form may seek to destroy the illusion of the critic as an objective intermediary or neutral arbiter between author and reader. The letter form, besides, encourages such an intersubjective intimacy while at the same time situating the object of criticism in a slippery realm which, as soon we seek to grasp it, evades us. This is a similar ‘skittishness’ (Cahill 240) which Cahill’s characters, as outsiders, feel — their outsider status not always the product of actual marginalia (in fact, quite a few of them come from a privileged, middle-class background) as it is the manifest expression of an inner struggle for authenticity. As the ‘spirit’ of Cahill writes in her last envoi in ‘A Miko Coda’: ‘If you are passing through me for the first time please enjoy my characters, disguises, sabotages and micro-prose.’ (241-2)

As a reader I appreciate the sincerity, the insecurity, and subtlety of Cahill’s hypertextual montages, Purloined Letters, and Post Cards. I would like to address Cahill just as she addresses me ‘as subject, as author of my own desires, anxieties and caprices.’ (56) It was Derrida, without whom Cahill’s narrator is ‘powerless’ (41), who once declared or wrote that he’d never considered himself to be a philosopher or a critic but rather a careful and patient (re)reader; likewise, that deconstruction is not a school or theory but a methodology and practice. I remember Derrida also retorting in a YouTube video that he wasn’t interested in l’amour (love); or did the interviewer mean la mort (death)? La petite mort is a metaphor for orgasm, which in French translates into jouissance, another word for bliss. Cahill is aware of both the magnitudinal intricacies of language’s future anteriority, (as in ‘Borges and I,’ the story of a resuscitated scientist), and of the rejuvenating potential of love, as of death.

In this age of digital and smartphone romance, amateurish stardom, pathological narcissism, and the proliferation of empty signifiers in the form of social medias such as Twitter or Facebook, the lead story ‘Duende,’ which won the 2014 Hilary Mantel International Short Story Award, struck a chord with me. This has eventually little to do with its tragic ending, I believe. Rather, it must be the character Julio’s antiquated yet genuine understanding on seeing the killing of a bull at a corrida in Seville, of the practice of art and poetry in particular as akin to what Artaud called a Theatre of Cruelty: ‘There’s a café by the river bank in Arenal where he orders wine and starts to write. For the first time in months the poems bleed. They spill from his pen to the paper almost monotonously.’ (Cahill 51) As his soon-to-be ex-boyfriend Miguel also feels, ‘There’s a mutilation to art which can’t be named.’ (Cahill 53)

Writing involves sacrifices. This, Hemingway understood, as Cahill does. I do not have in mind the refugee crisis in ‘Sleep Has No Home’ or the Christmas Island disaster which she exposes so tragically in ‘A Wall of Water.’ As its title suggests, these are distant nightmares, although they ought not to be. Neither do I allude to her tackling of the subject of libidinous desire in ‘To Show A Little Hustle’ or ‘Chasing Nabokov.’ These are necessary engagements, especially in the field of self-identified Asian Australian women’s writing where the erotic often remains a non-issue or a commodity, and Cahill addresses them with elegance, insight and cleverness.

What I mean instead are the ‘tortured souls’ in ‘Letter to Tadeusz Rózewicz’ (Cahill 224) and the ‘apocryphal realms’ of ‘Borges and I’ (133) which, following historical precedents and political oppressions, may be invented by the minority writer for their own sanity, stranded as they are in a hostile material reality, with personal failures and industry hurdles to the letters being issued. There is an irony in this. Cahill knows perfectly well that her letters might remain forever unanswered; that they must stop somewhere, at some point, for ‘the book to find its destination’ (236) into the collective mainstream of a readers’ consciousness; though that may never be, for a book’s message, particularly as a short story collection, is bound to be fragmented, like two lovers parting or like a divorced couple. And yet it is the aesthetic of the fragment that most concerns the minority writer. Cahill’s anguish in ‘Letter to Tadeusz Rózewicz’ to unburden herself from the writing process, to be free of writing, makes of the text, a reader, interpreting the figurative voices, compiling all the fragments: ‘I am not the writer, it is Mochizuki that I see.’ she plangently confesses in ‘A Miko Coda.” (Cahill 240)

There is an intentional ambivalence to this text-author, text-critic correlation. It can appear at times like the relationship between patient and psychoanalyst; the latter not really there, a silent listener. Can this delayed conversation however, be more accurate and the only material available in this age of immediacy, the Internet? And does Cahill use the handmade flow of a pen and paper or the dictates of a computer machine to compose her Letter?

While these interrogations may be none of her concern, they are part of my own thread of thoughts as a devoted reader. Letter to Pessoa trembles under the structure of dialogic, incandescent narratives. It is a profound, subtle and important collection; one deserving of a deep appreciation through reading, and (re)reading.


PAUL GIFFARD-FORET obtained his PhD in Anglophone postcolonial literatures from Monash University in Australia. He works as a sessional lecturer in English at La Sorbonne University, Paris. He is involved in political activism and a member of the New Anticapitalist Party (NPA).