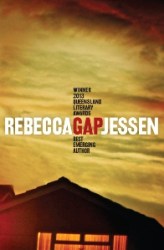 For many readers, the contemporary verse novel offers a startling reading experience; so directly, so succinctly, so urgently does the form communicate—that it compels a single-sitting reading, and is no less memorable for it.

Rebecca Jessen’s Gap is one such verse novel; with just over two hundred pages that can be read in an hour or so, its strong literary effect derives from the force of its narrative drive, its foregrounding of character action and cognition, and most particularly from its method of narration.

Jessen chose the first-person mode to convey “a voice that was urgent and unapologetic, a voice that would draw readers in” (Interview). Gap is one of increasing numbers of verse novels that ignore the mimetic convention of novel-writing implicit in the dictum: “one cannot at the same time live a story and narrate it” (Abbott). Jessen combines use of the first person with present-tense discourse. It is by virtue of this narrative technique that the protagonist of Gap, Ana, seems to narrate events—as she experiences them. For Jessen, the use of first-person present tense in Gap “allows readers to really get inside Ana’s head and (hopefully) form some kind of personal connection with her” (Interview).

of the fridge
forgotten what
I’d come for

The benefits of this choice of narration may not seem immediately obvious. After all, why not narrate using retrospective narration, with the benefit of hindsight that it enables the narrator whose retelling, after the events, can be reflected on and revisioned at will? The answer lies in the psychological imperatives of the verse novel. With its central concerns of need and loss, the focus in Gap is on the consequences of a pivotal event in the life of the protagonist, Ana, and her subsequent unravelling, rather than on a plot-drive towards a denoument; indeed the poems reveal early on what has happened, so the remaining question throughout the narrative is why—why would the protagonist commit this crime, given her circumstances—what compelled her and how did it happen? To ensure this tension Gap withholds the reasons until thirty-five pages before the book ends.

The extenuating circumstances of the protagonist’s situation form the verse novel’s sub-plots: the damaged relationship with her mother; the close connection between Ana and her younger sister Indie—for whom she is sole carer; the troubled memories of Ana’s childhood and adolescence; and the “unfinished business” between Ana and her ex-lover, Sawyer—this being complicated by the latter’s conflict of interest as a police officer investigating the crime for which Ana is prime suspect. While each of these sub-plots has a prescribed and limited scope in the narrative, nevertheless each aggravates and confounds Ana’s situation.

No easy resolution or redemption is offered; the protagonist’s self-doubt, her fear of being left alone, of loss, and the futility of her situation are all palpable. Indeed, Gap emphasises instantial cognitive and psychological processes: logic, reason; rationalisation and compensation. The immediacy of the narration draws attention to Ana’s psychological incongruities and heightens awareness of her ethical dilemmas.

fixated
by a magpie
on the powerlines

for its prey
with such
measured
urgency

Three noticeably longer poems in Gap exploit the immediacy that first person present tense narration offers. Each poem’s focus is on an unfolding and significant narrative event, and in each, Jessen’s measured delivery allows a gradual discharge of action and emotion that heightens tension. In the first example, a five page poem (183-188), Ana returns to her mother’s house and in a flashback of memory, relives her crime. The poem’s corresponding shift into historical present tense lends urgency to the telling of the fateful experience. A second poem of four pages in first person, present tense, captures the unfolding dramatic tension when Ana is interrogated at the police station (101-104). The third poem, spanning five pages (191-195), is a reckoning poem, a moment of realisation for Ana—that her life is irreparably changed; a moment when her fears about her future are suddenly amplified:

‘I don’t know,
Indie
maybe this is
what needs to happen
maybe this
is it’

‘Please
don’t let them
take you’

I put my arms
around her

try
to give her
a feeling
of safety

Gap’s complement of poetic and narrative strategies heighten character cognition, narration and narrative momentum. Jessen breaks with the convention of titled poems and instead uses bold font for the first line of each poem. Punctuation is kept to a minimum. Each poem is constructively segmented to delineate exchanges of dialogue, regulate pacing and support rhetorical emphases. A comparatively lean writing style coupled with laconic phrasing engenders the character’s idiolect. The most common use of trope is simile, accessible examples of which include ‘know tonight /will drag/ like a freight train / crossing country (95) and ‘as if this is stand-up/ and I’m the punchline/ Sawyer has missed’ (72).

A recipient of the 2013 Queensland Literary Awards for Best Emerging Author, Jessen graduated from Queensland University of Technology’s Bachelor in Fine Arts in Creative Writing in 2011. Gap won the 2012 State Library of Queensland Young Writers Award in the short story category. Further awards are conceivable: with four accessible publication formats—paperback, epub, pdf and Kindle—Gap will likely garner broad appeal from a crossover audience of readers of Adult and Young Adult fiction.

In the wake of Gap’s auspicious beginning, Jessen now finds herself reflecting on its success and contemplating her next project. Jessen, who never imagined her first book would be a verse novel, recollects “it was a complete surprise but a very welcome one” (Interview). Judging by the success of Gap, readers would welcome further ‘surprises’ from Jessen.

LINDA WESTE is a poet, editor and teacher of creative writing. Her latest academic research on verse novels is available in the online journals New Scholar and JASAL. She is currently writing her second verse novel.