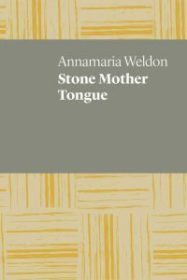 Annamaria Weldon’s luminous fourth collection returns the poet to the archipelago of her birth.  Stone Mother Tongue begins in prehistoric Malta, where Weldon mourns the “goddesses we trample[ed]” across the centuries.  The poet guides us through shifting incarnations of her homeland, where “Recollection is mapped country folded backwards / along familiar creases” (50). Weldon’s poetry enacts a uniquely feminine divination; she calls forth a goddess oracle unbound from history, a statuary tongue unloosed from time.  Ancient relics —museumed, looted, or abandoned—are portals to haunted islands where “pre-history seems just offshore . . . time’s lost coast in stone, not words.” Weldon elegantly negotiates the fraught territory between conflicted and conflicting histories: collective and personal, traumatic and resilient, human and divine.

In anthropology, liminality (from the Latin word līmen, meaning “a threshold”) signifies the ambiguity of middle rites, when the seeker has shed her pre-ritual status but has not yet completed her rite of passage.  Arnold Van Gennep integrated the concept of liminality into anthropology in his 1909 study Les Rites de Passage, which outlines three distinct phases of ritual progression:  separation, liminality, and incorporation. Van Gennep’s ritual trinity is relevant not only to Weldon’s poetically resurrected antiquity; the anthropological concept of liminality also captures the elegiac melancholy of her work. At once preciously specific and sweeping in their historical resonance, her poems mourn the erasure of deities, landscapes, selves and beloved others.

In a land where “asteroids once smashed to earth,” language remains as eroded as geological history: “Each remnant’s recorded by era, / but Beta counting only calculates rates of decay, / a relic’s meaning remains cryptic (50, 23).  This curated vacancy creates space for illumination and divination. Weldon calls on “incantatory” stones to resurrect an ancient, maternal language, born of a time “When everything was the Goddess /and stone was our mother tongue.” Her elegiac “undersong” mines the blank spaces beyond and between words, the inability of language to capture the most enigmatic aspects of human history: our ancestors and their deities.  Yet, she insists that the oracle’s translation can only ever be partial. The Goddess speaks “a language [as] untranslatable as stars in daylight.” Despite the poet’s efforts at resurrection, “a relic’s meaning remains cryptic” (23).

The first section in Part One, “Divining the Neolithic,” shows us that even when ancient matriarchal rituals and relics have been ravaged by time and violence, traces of divinity linger. “Geomancy” reconfigures the “broken altars” of abandoned temples.

Time and weather, the ploughman’s husbandry
and urban sprawl effaced them, leaving us to guess
the geomancy, gutted now from enigmatic temples. (32)

Agriculture, exposure, and expansion have “effaced” this holy site, but the final desecration is rendered as an anatomical wound: the temple has been “gutted.”  Part of Weldon’s poetic magnetism lies in her capacity to evoke visceral responses through language that is often violently acute: “History’s survivors have heard it all before / the sound of invasion that some call arrival.”  Yet, Weldon asks far more of her audience than simply outliving the open wounds of history. Survival, she tells us, “is not endurance alone” (20-21). As an (inevitably partial) antidote to the unceasing escalation of gender violence across the centuries, she conjures divine maternal voices from the deep past, a chorus that both harrows and heals.

Goddess, when your body was worshipped
as holy matrix of the world incarnate
no clerics or sceptics mocked our devotion
and love conjured more power than hate. (18)

Throughout Weldon’s work, divination is disturbed by the arrival of new wounds, both personal and cultural.  The deconsecrated temple has become a tourist destination, its deities reduced to ancient curiosities.

While it may not be possible to resurrect the goddesses that once inhabited this hallowed ground, Weldon compels us to try. She invites us to listen beyond the gaudy white noise of our century, for the low hum of an oracle who keeps the secrets of her own survival well guarded, despite the hoards of curiosity seekers who trample her grave.  Yet, Weldon’s poetry is far more nuanced than directive. While she argues that survival entails more than mere endurance, she does not reveal the resilient alchemy for surviving history’s ravages. That mystery belongs to the deity, alone.

Catalogued as myth, in time She was denied
all ceremonies, those rituals that temper
time’s lapse to entropy. (45)

This inquiry underpins the poems of Stone Mother Tongue: How do we, as a species, survive “time’s lapse to entropy”?  Could the resurrection of ancient, maternally-embodied rituals help us to “temper” the technologically-saturated ennui of late capitalism?  These questions are integral to Weldon’s work, even as they are revealed as unanswerable. The goddess’s stone tongue remains immobile, her “silence mystical and terrible” (33).

Enlist a devoted archivist to polish history.
When topography frames experience, you will accept
the residual changes heartache left in its wake. (50)

The poet becomes her own “devoted archivist,” preserving histories that are at once personal and collective, ever-present and archaic.   In “Devotion’s Aftermath,” the Goddess shines as an elusive specimen of antiquity, “hidden in plain sight” (45).

In “Borderlands,” Weldon guides us into the liminal “Interstice” between the living and the dead.  “Disarticulated by its darkness, we / have traversed all the stations of being / from birth to the excarnation of bones.”   The portal of “sympathetic magic” is guarded by the “gaze of ancestral protection” — a hollow skull “watching all our futures.”  (56). Under the protective eyes of this this spectral guard,, women gather, “as if willingly entombed,” crooning not in mourning but in celebration: “mantras of maternal consolation that rise / and fall with the birthing cries of the woman crouched on the cusp of deliverance.”  Now, after the desecration and (partial) resurrection of ancestral deities and their followers, a birth arrives, and “the boundary between worlds is breached” (57). A new divinity — human, this time– emerges from “the cocoon of smooth deliverance. . . / a priestess / is not made, nor merely / born, but recognized” (59).

The poems of Part 2, “Phoenician Malta,” document the atrocities inflicted on the Maltese people by  “colonizers, slavery, trade, cruelty” (70). Weldon interrogates what the Phoenicians brought with them as well as what they stole or destroyed, treating the islands merely as a “stepping stone settlement” (73).  “Entire seashores, bays and beaches made middens” by an insatiable hunger for beauty that demanded destruction:

A quarter million snails sacrificed
for one ounce of dye.” (69)

In “This Precious Stain,” Weldon questions “What stories lay– still lie–beyond beauty!” and whether, “if we knew / their true cost, would their magic be dispelled / or the enchantment deepen?”   Other poems elegize the human cost of quarrying the islands’ precious stones (formerly the source material for the statues of maternal deities who dominated Part One, “Prehistoric Malta”). These stones are now subjected to a “violent separation.”  “Enormous slabs” are quarried and “prised open with fire, sanded smooth to elide the trauma / of calving rock.” The colonizing labour of unsettling these relics of geological time is equally violent: “Boys died here from a moment’s slippage, manoeuvring the masonry.” “Crushing has many sounds,” including “an exhalation / vaguely human, hanging in the air / hauntingly as final breath.” (71)

Alongside the desecration of the islands’ people and resources, the Phoenicians left something behind: an alphabet.  “Newly designed Phoenician letters” gave those who survived the invasion and its aftermath the words to record their trauma: “incised on clay / or inked on papyrus.  Before their invention / thoughts that could only be wept / sank unmarked into the dark water.” (67) In “A Shoreline Scripted for Heartbreak” we follow the “arrivals and departures” of the “Literate, captive women . . . assigned as scribes to passing merchants.”  Starkly rendered in sparse language, the poem elegizes the “Ill-fated, unrecorded, charged encounters” these women endured in the “ceaseless maritime traffic” of “colonisers, pirates, naval flotillas, hospital ships, refugee boats, cruise liners, smugglers.” Weldon once again holds our hand to the flame, forcing us to see the harrowing similarities between the human trafficking of their century and our own.

Part Three, “Anthropocene, Antipodes,” merges Australia’s cultural amnesia with the aphasia of personal grief.  “What I Saw at the War Memorial” articulates the national tendency towards historical erasure with the compulsion to create monuments that privilege nationally sanctioned deaths, while participating violently in the erasure of other, marginal massacres.

Grief is the gap where words
won’t meet.  Time is a stone-cutter
quarrying rocks for monuments.

Memorials are what we build
to limn the invisible, mark thresholds
we can’t cross [.] (101)

In the 21st century’s amnesiac liminality, such thresholds of grief remain invisible and impossible to cross, rendered in fissures of language and memory.  The poems of this final section embody an enigmatic loss of unity, sketching a deliberately fragmented picture of “grief’s blurred peripheries” against the hazy backdrop of “memories that rise like mist” (99).  Weldon’s final poems elegize a multiplicity of losses, including a harrowingly beautiful tribute to her father’s remaining memories as he struggles with dementia:

when all that’s left
of your former life are those memories of the journey,
sightings and oracles remind me who you are — had been
before your mind soared to where there are no maps. (103)

In the end, Weldon brings us full circle, the poet herself becomes an oracle in “Leaning Back Towards the Neolithic.”  Returning to her ancestral homeland, divination is not invoked or invited, but embodied:

From village to hamlet, the valley path from Gharb
to Birbuba has become my pilgrim’s way, each step
rephrasing me as I walk it.  Words come unasked,
immersive as the weather of prayer, heartache
like a fig tree’s barren longing to bear fruit.

In her “Epilogue,” Weldon shows us that even when the statues of ancient dieties have all been effaced, the oracles silenced for centuries, poetry can offer a portal into the liminal threshold of harrowed divinity — if we only are willing to seek out the ruins, and to listen to the halting echoes of our Mother’s stone tongues.

LINDSAY TUGGLE is the author of The Afterlives of Specimens (The University of Iowa Press, 2017) and Calenture (Cordite Books, 2018) which was commended in the Anne Elder Award and shortlisted in the Mary Gilmore Prize. She has been a fellow at the Library of Congress, the Mütter Museum / College of Physicians of Philadelphia, and the Australian Academy of the Humanities.