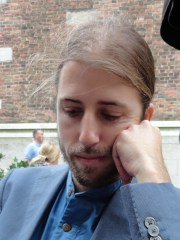 Luke Fischer is a poet and scholar. He won the 2012 Overland Judith Wright Poetry Prize and was shortlisted for the Newcastle Poetry Prize (2012). He is the author of three forthcoming books: a debut collection of poems titled Paths of Flight (Black Pepper), a monograph on Rilke and phenomenology, and a book of children’s stories. His poems and translations have appeared in Australian and international journals, including: Meanjin, Overland, Cordite, Snorkel, Agenda (UK), Antipodes (US), and ISLE (US). He was awarded a PhD in philosophy from the University of Sydney in 2008 and has held academic positions in the US and Germany. Recently he returned to Sydney.

The serious blue of dusk
pervades the forest and figures.
On the further shore a dense cypress
spires. To the left of the group
arranged as a chance constellation,
a woman with a trunk-like frame
trails a river of towel, the source in her hand,
while her head is submerged in blackened foliage.
Two women, kneeling on the bank like deer with
folded legs, watch a naked girl as she slowly leaves the water,
unembarrassed and contained. Her iconic profile,
ringed by a cumulonimbus steeped in twilight.
To the right a tomato cheeked farmer with ample breasts
relaxes in cushioning arms and a sturdy physique
inclines with a tree. A seated woman between them
is feeling the texture of the earth while a russet head,
still bathing alone, rinses a shoulder, looking on.
Their skins shimmer––a moonlit lake
composed of refracted sky, woods, shore.
Beside the dark cat on a table of grass:
a cane basket of fruits and a watermelon half.

After days of rain

In my fine leather shoes from Berlin
I slink along the bank, the soles pressing
native grasses and purple stars

Is there no way we can enter a forest
other than by severing it––like drawing
a rusty scalpel across a patient’s skin?

And what about the footpaths and roads,
the byways and freeways, motorways and runways––
all the cauterised wounds scarring her back?