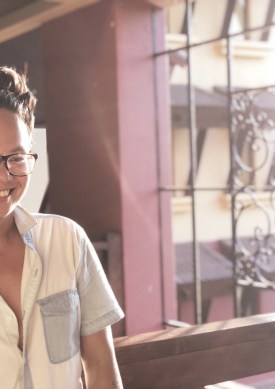 Mark Anthony Cayanan is from the Philippines. They obtained an MFA from the University of Wisconsin in Madison and are a PhD candidate at the University of Adelaide. Among their publications are the poetry books Narcissus (Ateneo de Manila UP, 2011) and Except you enthrall me (U of the Philippines P, 2013). Recent work has appeared or is forthcoming in Foglifter, The Spectacle, Dreginald, NightBlock, Crab Orchard Review, Cordite, and Lana Turner. A recipient of fellowships to Civitella Ranieri and Villa Sarkia, they teach literature and creative
writing at the Ateneo de Manila University.

Who gets off backpack heavy with sweaty clothes tired but ready to supply their name
at the front desk one of the unremarkable many
who before this was seat 27A kept asking for gin and ginger ale from a flight
attendant who during her stopover hired a catamaran for the day to go snorkelling
four days later a passenger will grow livid when she can’t give him his order
whiskey on the rocks no ice and who upon entering a cab that smells of
grease and farts will crack open a window
the driver snickering as the streets even out into oiled anonymity and the midnight
DJ on the radio harangues a heartbroken caller who’ll take his dead heart with him
to work and while in line for the train overhear a girl telling her friend about her
sister a performance artist who used to snap
pigeons’ necks on stage she’s since quit her imagination limited to feats of
borrowed depravity now she’s one of the 1.6 million of her kind in the country
working five days a week 11 hours a day she sweats
shallots and ginger in a pot that spans two burners and adds among other death
sentences two pounds of butter the invitation to hunger
wafts across the street toward a bank with a guard who has no history of violent
behaviour but who’ll six years from now
hold a gun to his wife’s temple five straight days without sleep
today his wife applies Subtil Crème
to a customer’s cheeks using an angled brush that’s more than her daily
salary a customer who hums a song from the jeepney a college student who’ll decide
to spend her allowance on tickets to the Ultra Lotto Jackpot P1.18 billion
the body once mastered must have no need
for food she bums cigarettes off her best friend his phone constantly vibrating
who just wants one thing grows impatient
with those who refuse to send dick pics
wind rattling the windows of the empty classroom