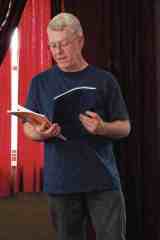 Mark Roberts is a Sydney based writer and critic. He is currently editor of Rochford Street Review and P76 magazine. He was widely published in Australian literary magazines and journals during the 1980s and 90s and has recently emerged from a long hibernation. His book Stepping Out of Line was published in 1985.

After arrival – storm at sea

running like children
past the old midden,
protected by a rusty sign,
we burst onto the beach to be confronted
by the stench of dead mutton birds.
they stretch in a decaying black line
along the high water mark.
others lie rotting, caught on the rocks
at each end of the beach.
we climb over the headland
to the next beach
to find the carnage even greater
a wall of feathers bones and maggots
piled high.

in the general store
the talk is of pollution –
oil spills up the coast
or poison feed.
But in the bottle shop
an old woman
tells us of a storm at sea,
of birds dropping
exhausted into the waves.