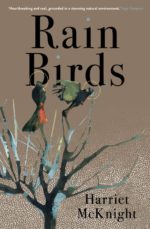 Harriet McKnight’s brilliant, moving novel reminded me of a book I had read a long time before, in 2006. That was Kate Legge’s The Unexpected Elements of Love, a novel that explores some of the same themes that McKnight incorporates into her 2017 novel: namely, dementia and climate change. Another that McKnight works into her book is the theme of domestic violence, and she also touches on racism especially (but not exclusively) as it relates to Aboriginal and Torres Strait Islander populations.

The narrative in this novel is exclusively and alternatively focalised through two characters. One is Pina Marinelli, a woman in late middle age whose husband Alan aged 60, has developed dementia. Alan is not from an Italian background and so has a different surname, although it is not disclosed. The other woman used to focalise the narrative is Arianna Brandt, a biologist with a Canberra university who is in charge of a program to release mating pairs of glossy black cockatoos into the countryside in East Gippsland where the action takes place. Boney Point is a small community that becomes acrimoniously divided when Sol Petroleum, the petroleum company that is funding Arianna’s work, starts exploration and well development nearby.

The narrative relies for some of the time on a stream-of-consciousness produced by either one or other of these women, although there is plenty of dialogue, for example passages that show the interactions that take place between Arianna and her colleague Tim, or between Pina and Alan. All of this enables the writer to develop the plot, which is deceptively slow to emerge at first. Forward movement has moderate strength but it is persistent. There is consequently plenty of scope for lateral movement, which gives the author opportunities to obey her instincts and examine byways and small branches stemming off the novel’s mainstream as she develops the major themes she has chosen.

The thoroughness of the preparation makes the denouement, when it arrives, especially powerful. The stories of both Arianna and of Pina are tied up cleverly within a few pages of an event that lends considerable drama to the book’s final section. So even though you are asked to be patient at first, the quality of the conclusion is far better than it might otherwise have been, simply due to the preparation the author has made sure to undertake.

The main vehicle for the theme of domestic violence is Arianna, whose personality is a little rebarbative, making it hard for her to socialise with other people and making it even difficult for her to maintain normal working relationships. The reader can understand what is going on, but people around her can feel excluded. Arianna is also slightly too dogged in the pursuit of her goals. It is as if, having been denied a normal childhood, she is unable to regulate her own desires or even, at times, think rationally. Like someone who is deeply committed to a narrow ideology, she can sometimes seem to be unyielding in the face of reverses, the kinds of barriers that people normally come across in the course of their regular lives and that can force them to reassess their goals. In one situation described in the novel, Arianna just ploughs on regardless, and struggles with circumstances that, for someone who had not suffered as she had as a child, would otherwise be unremarkable.

Arianna and Tim have released their birds in the forest and have prepared nesting boxes for them to use, but the creatures unaccountably abscond and the two scientists go looking for them using a radiofrequency tracking rig that picks up signals from devices that had earlier been strapped to some of the birds’ bodies.

Pina is meanwhile confronting the problem of single-handedly looking after her husband in their little cottage out in the bush at the very end of a lonely road. Every day, it seems, there are new challenges confronting Pina as she goes about the job of looking after Alan. She has to get him out of bed in the morning, put him on the toilet, bathe him and dress him, give him food and make sure he eats it, then make sure he doesn’t escape from the garden. She also has to do the shopping and most of the housework although she does have help sometimes from Tracey, a local woman who is also a volunteer with the Country Fire Authority. Pina keeps down a job at a local nursery run by an Aboriginal woman named Lil who is looking after a young man named Harley. Harley comes to mow Pina’s lawn from time to time and he also gets involved in a demonstration that is set up to protest the drilling out in the bush away from town.

McKnight often uses seemingly random sentences, that are set in italics, to help move the drama along. These instances serve to orient the narrative around recurring themes, such as Arianna’s childhood and her experience of a father who hit his wife. They can also serve to redirect the path the story is taking, and to bring to the forefront the interior life of the character in question, like a chorus can do in a song, by giving you access to elements of the character that are not currently being exposed by the immediate circumstances of the narrative. These short sentences become leitmotivs that help to develop character and thus to progress the plot.

One instance can serve to illustrate how this works in practice. When Arianna first encounters Alan, who is labile (he experiences steep mood swings) and who tends to vocalise negative emotions in a way that can be surprising for onlookers who don’t understand their biological causes, she experiences a flashback to her childhood that triggers physical symptoms. The narrative is suddenly broken by one of these italicised sentences that functions as an echo of something heard earlier in her life. The way that this kind of interaction is handled demonstrates the strength of the artistry involved in this work.

What strikes the reader about Arianna is how she tends to see the world through a distorting lens that has been moulded according to the dictates of her early life experiences, and the experiences she has had in the subsequent years, years she has been busy forging a career while at the same time dealing with the aftereffects of trauma. As the author shows, however, nature is a powerful force and so however much you might wish for a certain outcome you have to work with the limitations placed on you by the people, animals, and places that surround you.

Arianna is an interesting character that performs several key functions in the narrative. Beyond this kind of imaginative creativity, there is also a gentle wisdom is threaded through this wonderful book. Just as you might wish to chide Arianna, you are tempted at certain moments to want to scold Pina for clumsy attempts to control her husband’s personality. Nature is a hard taskmaster and people are well-advised to obey its dictates as far as they can be rationally accommodated, because the alternatives can be terrifying.

I was brought to tears at the end, where the narrative arc terminates proceedings with decisive force. It is not too strong an endorsement to say that the book embodies a deep humanity. The author’s recent passing at a tragically young age is to be double regretted inasmuch as it deprives the broader community of potentially great books. It is also notable that this book, like so many good recent works of fiction by talented female Australian authors, is set in a small country town. Who said we ignore that part of the world?

MATTHEW da SILVA is a journalist and writer who lives in Sydney.