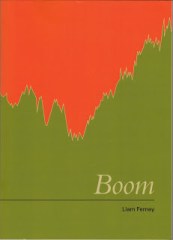 Liam Ferney’s Boom (Grand Parade Poets, 2013) is a much-anticipated collection of tightly-knit poetry, threaded with the things he has seen and the spaces he’s occupied, cast with a sardonic glance and the flick of a metaphoric burnt-down cigarette. It is the Steve McQueen of poetry collections, to my mind.  Or perhaps, even more accurately, it is a smart, enthusiastic 30-something guy at a party describing what it is about Steve McQueen that matters.  In really articulate tones, and with tie askew, because he’s come from work.  We get potency and we get the sublime, with a lot of grit all around the edges.  Intriguingly, the grit comes in the form of elegant sentences that surprise, their content seemingly slipped in under the radar of form.  I wouldn’t say this is the aim; just that the music of the lines takes your senses first, and then come the beautiful clusters of pop disintegration, fuzzy images of the right brand of cynicism, a professional eye on the world’s seams.  In an early poem within the collection, ‘Expecting Turbulence’, we get this:

First chance I get I’m SoCo mofo
backdrop a drained out montage, colours
of a nunsploitation print abandoned in a can.

In ‘that thin mercury sound’ (below) we get some more; pleasing rhythm with a certain amount of give, encompassing some event that could have been a bad day in the office or an international relations nightmare (Ferney is a poet who often mentions his work in public relations and politics, and we have this in the satisfyingly detailed bio included at the back of the book). We don’t know; it doesn’t matter.  What matters is he’s buried it in here for us to have, and that is an absolution that cleanses much more than a top-marks performance review or a constitutional crisis averted (am I right, day-jobbers?).

In addition to the poems with a fast, chopping sensibility, there are also more narrative inclusions.  A stand-out of the collection is a poem which takes us into the story of a relationship and a trip, ‘The September Project’ (below).  It has a litany of living that situates our minds eye into a maybe-Bukowski landscape (without the domestic violence), or somewhere past in a collage that feels both American and Australian, but may include Korea, as many of the poems do. He gives her Converse to ‘scuff at the mudguard’, and they wash dishes for bad pay and write.  The poem has pace, and an expansive sense of possibility that grows even while the relationship falters, as we know it will (It’s that kind of poem).  It’s the most lovely example of written melancholy, seen to particular effect towards the end:

At the conclusion, Ferney ends with a line that ‘the September project was never submitted’.  It’s this, in combination with an earlier moment in the poem ‘the September project was something/they could use in creative writing seminars/for all time..’ that makes us smile because we know this little hook, and that it saves us all – Ferney, and his readers – from too much sentimentality.

Once we would have just called that postmodern, that the self-reflexive was a smart attribute with which to back away from content that dealt in the romantic.  Now, like late-model masculinity, we can treat it as an extra ingredient to the sentimental.  It is the dash of bitters in the sweet lemon and lime.  (And no, I’m not going to move on any time soon from this imagery.  How could I waste such an opportunity, when Ferney has a poem in here called ‘The Man Who Shot Liberty Valance’?  And given that his first collection was entitled Popular Mechanics?  I’m in good company.)

‘Millenium Lite Redux’ is a dense poem that skates us through place via questions.  It is typical of the many compact poems within the collection, and displays more of the fluidity that calls to mind John Forbes, but with the multi-faceted knowing that comes from having occupied so many roles and places already.  That is, a Liam Ferney poem about the dole is not a poem that assumes the role of poet first and foremost.  It’s a poem that says, quite rightly, how do I work these angles to get to the next place I need to be.  It’s a poem that says ‘the diary is a newstart fraud de art’ and ‘if you don’t have the ingredients don’t try to cook’, and then, in the close of the second stanza ‘and I think I understand the saints/stranded so far from home’.

Boom is poetry without swagger and with plenty of humility, yet the sum of this is a kind of roar and a knowledge of social and cultural lexicons laid out like samples for us to buy.  It reminds us, even within the lines, not to be a wanker;  ‘us’ being the nexus of the poet, the work, the readers.

& that’s how
You get suckerpunched:
Using bigger &
Bigger words
As if somebody had tattooed
A scrabble player’s aesthetic
Over poetry’s flexed bicep.

Despite its range of poems, it hangs together well due to the assuredness of voice (assured, even when it’s asking questions of itself).  It asks us to come inside the poems and take those parts we want, and while we’re there, to have a look at those parts that have been laid in via code, and to not flip out if they don’t give themselves up to us immediately (or ever).  It’s a text-y feast and there’s plenty to be had.  Dial room service and say ‘Bring me some man poetry of the modern day’, and you’ll get Boom.  Tucked in a white paper bag, like white toast in a Bathurst motel; exactly what you want.

MELINDA BUFTON is a Melbourne poet and reviewer,   Her work has appeared in a number of publications including Cordite, Rabbit, The Age and translated in Chinese poetry journal Du Shi.  Her debut collection is forthcoming from Inken Publisch (www.inkenpublisch.com).