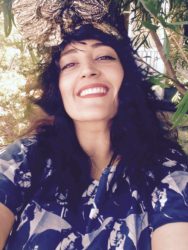 Misbah Khokhar was born in Karachi-Pakistan, with both European and Indian ancestry. She currently lives in Melbourne. She holds a Masters in Philosophy in Creative Writing from the University of Queensland. Her work appears in Australian Poetry Journal, Cordite, Contemporary Asian Australian Poets and Peril. She has been featured on ABC Radio’s Poetica, and has performed at the Queensland Poetry Festival. She was highly commended by Thomas Shapcott, Brownyn Lea and John Kinsella, and mentioned as a ‘standout’ in Lea’s essay ‘Australian Poetry Now’ (Poetry  Magazine, May 2016, Ed. Robert Adamson). Her debut collection Rooftops in Karachi is published with Vagabond deciBels3.

My cousin has named all of his homing pigeons. He takes them in his soft hands and feeds them, but I have a feeling he could just as easily use those hands to snap their thin necks. My other cousin, who lives in the same house, goes around shooting cats. Since I arrived I have been putting out bowls of milk each night. Another cousin has an imaginary lover who she has introduced me to. She makes him out to be so real that I believe he is. But I can never seem to see him, which is not due to him being imaginary, but because he is shy and agile. She describes the way he kisses her, and the conversations they have, and to this day I remember his name. I know it’s been said that falconers feel their hearts soar with their falcons, but I don’t think it’s just a feeling.

I’m Going to Give You a Photograph